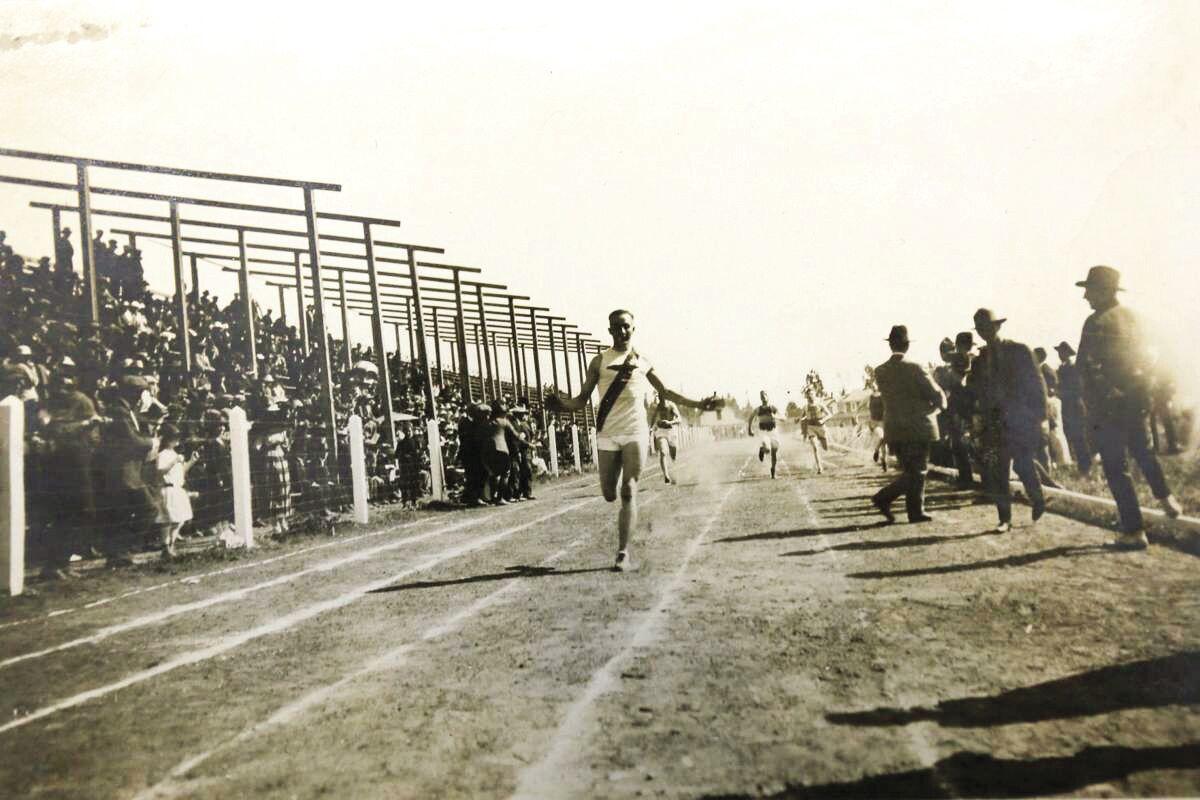 Art Tuck, a Redmond Union High School senior, breaks the tape in the 200-yard dash at the 1919 Oregon State High School Track and Field Championships, one of seven events he won that day. 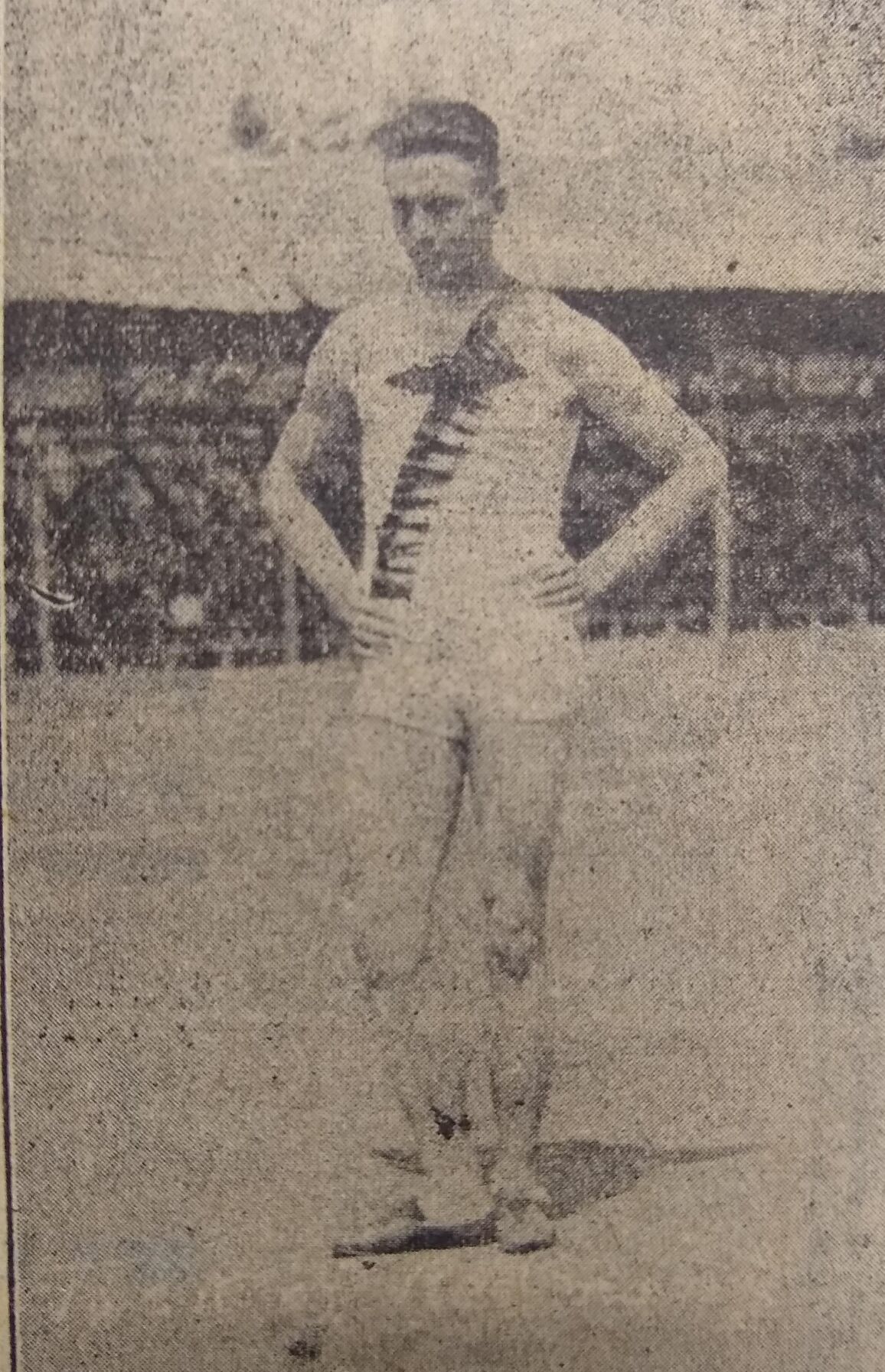 Art Tuck, a Redmond Union High School senior, breaks the tape in the 200-yard dash at the 1919 Oregon State High School Track and Field Championships, one of seven events he won that day.

Arthur M. Tuck, University of Oregon athlete who on May 9 at Seattle broke the Pacific coast Javelin throw record and set the new mark at 192 feet 4 inches, was formerly a participant in Central Oregon track and field meets.

As a member of the Redmond track and field team, Tuck entered the competition at Madras in 1919 and virtually alone won for Redmond the pennant offered that year by the Central Oregon school day association.

Tuck still holds several records as a result of his work at the Madras meet. The 220-yard dash he made in 23 4-5 seconds, breaking the existing record and establishing a mark not since equaled. His javelin throw records stands in Central Oregon at 167 feet, 5 inches. He also has the shot put record at 44 feet, 7 inches.

Later in the spring, Tuck won wide recognition when he represented Redmond union high school and won the state championship for his school at a meet held at the University of Oregon at Eugene. He won over entire teams representing Portland, Salem, Eugene, Medford and other of the larger schools of the state.

After his latest triumph at Seattle, Coach “Bill” Hayward claimed for him the national javelin throw record, declaring the best previous mark in America to have been set a year ago by Milton Anguier of Boston, who threw 192 feet, 2 inches in Olympic try-outs. Other records however, show G. Higgins of the University of Chicago to have made the mark of 194 feet, 11 inches.

Tuck is the son of John Tuck, principal of the Redmond grade school.

Milton L. Odem’s 1939 Chevrolet coupe, stolen from in front of the Mayfair theatre May 8, was recovered Wednesday at Boise, Idaho, where it had been abandoned, reports Chief of Police Jesse Edgar.

Odem telephoned the Boise chief of police, who told him that the car had been found on the streets with the key gone and had been towed to a garage, but that it was apparently in running condition. Odem is arranging to have the auto brought back here. It was stolen between 10:30 o’clock and noon while Odem was inside the theatre. Along with the auto, the thief got away with all Odem’s theatre projector tools, including an electric drill.

Redmond has been experiencing an epidemic of stolen cars in recent weeks. Monday city police recovered a 1942 Chevrolet sedan in the junipers near Roberts field. Three wheels and tires and the radio had been removed. The car is owned by Lawrence Carr of Redding, Cal.

About the time Odem’s car was stolen, the police recovered another auto, a 1938 Buick sedan belonging to a man in Klamath Falls. The Buick was found in Redmond.

Edgar warns all car owners to remove their keys and, in addition, to lock their cars.

A birch tree was planted by students of the Earl Russell School in Sisters April 30 in honor of Arbor Day and the first shovel of dirt was turned by Mrs. Jo Wanichek, third grade teacher, and Mrs. Edith Barker, fourth grade teacher. Mothers of the children gathered on the lawn to witness the ceremony.

Names of all lower grade students and staff, which had been written on a strip of paper, were placed in a glass jar and buried at the roots of the tree.

Children took turns holding the tree and shoveling in the dirt.

Money for the tree had been brought to school by the young students.

Mrs. Wanichek gave a history of Arbor Day which was a day set aside by Nebraska’s governor in 1872 since the area had few trees, violent winds and desert land. One million trees were planted that day and now nearly one billion trees have been planted in the midwestern state.

Fourth grade girls presented a choral reading of “Trees,” by Joyce Kilmer and the group sang “America the Beautiful.”

Children from grades one to four participated in the affair.

The Outdoor Classroom at Redmond High School received an $11,000 grant from the Governor’s Watershed Enhancement Board last week.

Jan Erickson, a member of the Outdoor Classroom team, said the money will be used to create a mix of five plant communities on the fenced half-acre plot at the high school.

One of the communities will be riparian, a type of habitat associated with water, to take advantage of work already done at the site. Students will choose between other communities ranging from grasslands, bitterbrush and desert to transitional forest.

A screening of wildlife-friendly plants is planned for the perimeter of the lot to shield the project.

The classroom is not just for students. The project will be available as a research tool for anyone who wants to landscape with native species.

“As water becomes more and more of an issue,” she said, “native plants will be of more interest.”

The project will get started this spring when loads of topsoil are brought in and spread. In the fall, students will begin designing the project and propagating native plant species in the high school green house. Kimmel Landscaping, which specializes in native plant species, will provide some of the stock.

Future classes will maintain and upgrade the facility and conduct studies and sue the outdoor classroom as a laboratory. The project also offers a forum for discussion of topics such as public-lands grazing and water rights.