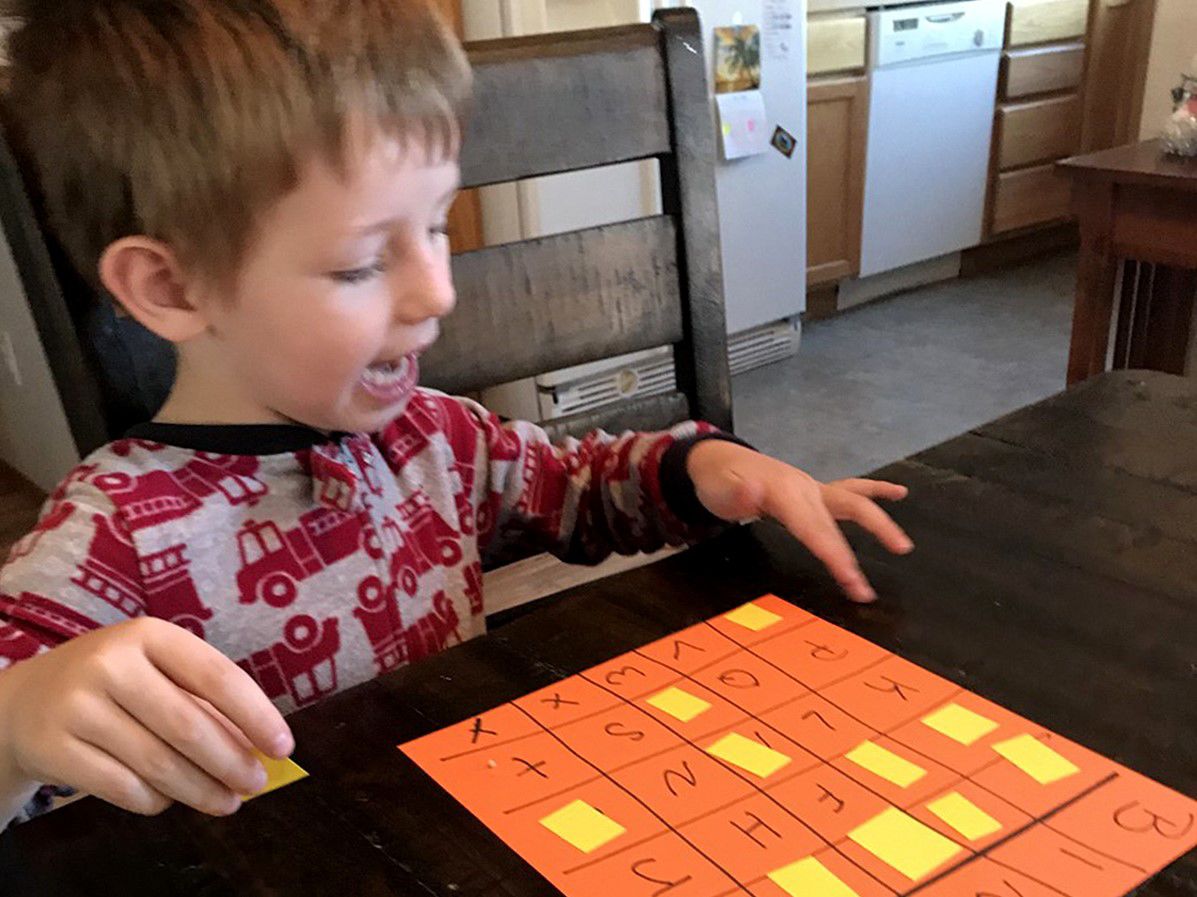 A child in the Head Start program does ABC Bingo at home. 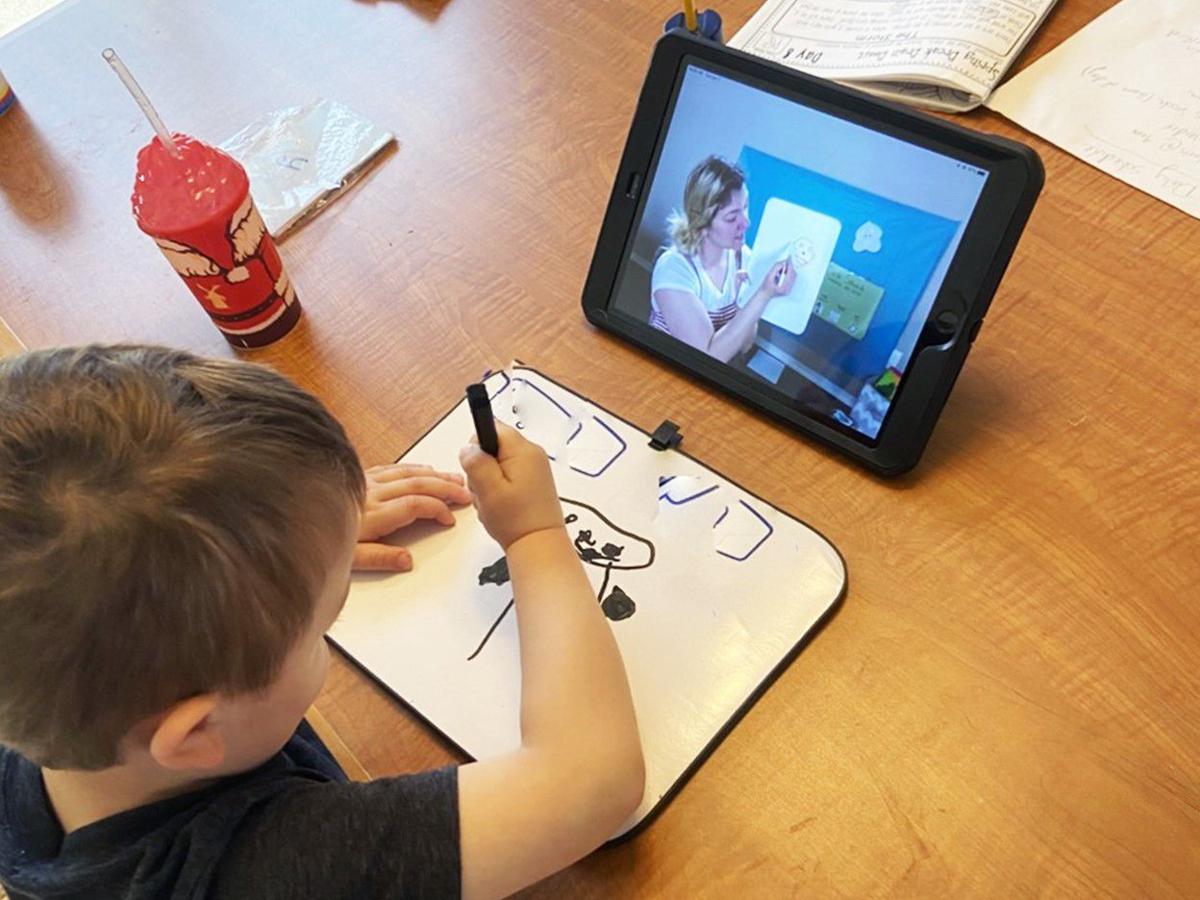 A child in the Head Start program works with “mat man” while following teacher Taylor Leeland’s video from home.

A child in the Head Start program does ABC Bingo at home.

A child in the Head Start program works with “mat man” while following teacher Taylor Leeland’s video from home.

Many schools have turned to online teaching in response to the pandemic, but what do you do for 3- and 4-year-old children in preschools? That was the question for Head Start as classrooms were shut down.

“It’s not developmentally appropriate,” for young children to learn on the computer, said Brown. Head Start’s curriculum is based around play and individualized to meet different learning goals the parents and children have set.

The instructors and administration spent a week designing a plan to keep supporting the families in the program, said Taylor Leeland, a head start instructor in Redmond.

The focus of Head Start has always been supporting the whole family, said Brown, and now that means helping parents continue their children’s preschool learning at home.

“Their parent is the biggest and best advocate,” Brown said.

The instructors are providing parents with daily lesson plans, posting short videos on their specific classroom’s FaceBook page and making weekly calls to check in, said Leeland. Parents are also able to use an app to find lesson plans, track their children’s progress and send videos back to the teachers.

Amanda Peterson, said the app has been “really helpful” for her as a parent, providing her with lesson plans she could tailor for her son Carson. “Even if it’s not word for word at home, it’s a great resource,” she said.

“We happen to have craft supplies at home,” she said, but the lessons use a good mix of household materials or even not requiring materials. Peterson said she and her son look for concepts like shapes and symmetry on a nature walk or do an ABC scavenger hunt at home.

Continuing the connection with her sons’s teacher through videos has helped keep a sense of normalcy and engaged learning, Peterson said. “Carson does well doing familiar things.”

Peterson said that some of her son’s goals have been for self regulating behavior and the resources provided for him in the classroom, such as a calm book and tiles that help him express what he is feeling, have helped him in the home.

The Head Start teachers are checking in with families not only about the children’s preschool progress, but also to see what needs the family has, said Leeland.

THE MOMENTS THAT SHAPED THEM: Local coaches share memories of their formative games

NeighborImpact is able to provide or direct the families to many different kinds of resources, including food banks, rental assistance, mental health resources and help with their electricity bills, she said.

The Pacific Power Foundation has been working to support the community, said Chancellor, and reached out to NeighborImpact when they tracked the grants they gave to other foundations. They saw that three of those foundations had in turn supported NeighborImpact — to the tune of $155,000.

“Head Start has shown great creativity in shifting in this time,” said Chancellor.

Head Start “like everyone” is waiting to see whether their summer programming will be in the classroom or if they will need to continue the remote programming, said Brown.

Brown is preparing for both possibilities, she said, but hoping to open the classrooms for in-person programs soon.

Reopening may come with its own challenges.

“If we are only able to have 10 kids in a classroom we would have to double staffing,” or renegotiate the program’s framework, said Brown.

Leeland’s classroom serves 19 families, she said, and some have chosen not to participate in the remote programming.

Remote learning has worked well for some families, she said, but others have struggled. One of the big struggles she mentioned for parents at home is setting a schedule, and managing the school activities of several children, along with their own work.

“We are very fortunate and lucky to work for an agency that is supportive during this unprecedented time,” said Brown. The Head Start teachers “are doing well — have risen above the challenge.”

“Some of their videos take my breath away, their creativity, turning their homes into a classroom.” It makes her proud as a director, she said, but she wouldn’t have expected anything different.