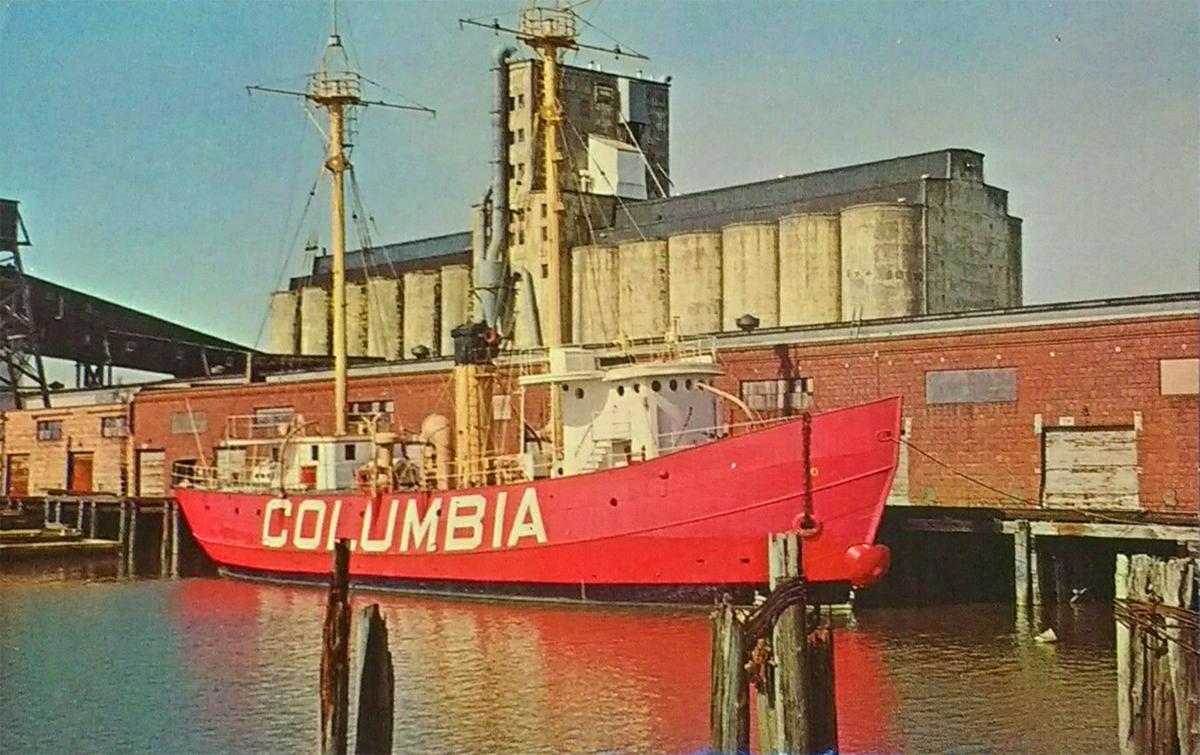 The Columbia (Lightship LV-88) is shown dockside in this old postcard image after it was brought to Seattle to serve as a museum ship, in the early 1960s. This was the lightship whose crew claimed to have seen “Colossal Claude” in 1934. No. 88 went into service in 1909 and stayed there until 1939, when it was replaced with Columbia Lightship LV-93. 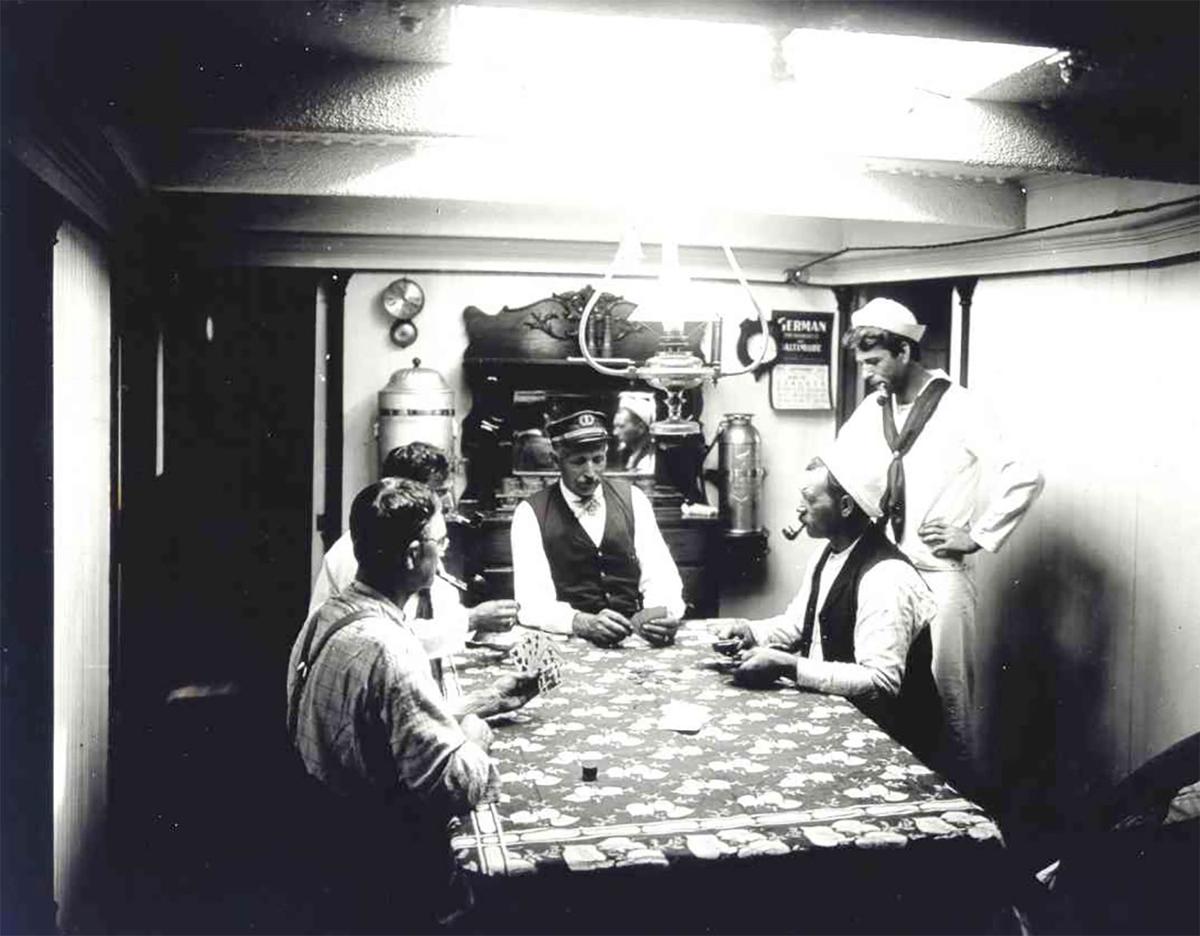 The crew of a lightship, possibly the Columbia, is shown playing cards belowdecks, probably sometime in the 1930s.

The Columbia (Lightship LV-88) is shown dockside in this old postcard image after it was brought to Seattle to serve as a museum ship, in the early 1960s. This was the lightship whose crew claimed to have seen “Colossal Claude” in 1934. No. 88 went into service in 1909 and stayed there until 1939, when it was replaced with Columbia Lightship LV-93.

The crew of a lightship, possibly the Columbia, is shown playing cards belowdecks, probably sometime in the 1930s.

Ask anyone to name a mythical Oregon creature, and you’ll get a very predictable answer: Bigfoot, a.k.a. Sasquatch.

The stories and legends of Bigfoot, the Pacific Northwest’s reigning “hide-and-seek champion,” are vast and growing every year. Just a list of them, from 1945 to present, would be longer than this article.

But Bigfoot is neither the only Oregon cryptid, nor the most plausible. There are others.

And chief among those others is the Columbia Bar Sea Serpent.

Here’s the story of this redoubtable cryptid:

On or just after the Ides of March, 1934, the skipper of the lightship tender Rose returned from dropping off a relief crew on the Columbia River Lightship with a remarkable story.

It seems the entire crew of the lightship, plus the crew of the Rose, saw a huge, snaky thing swimming around the ship — a genuine, bona-fide, honest-to-Godfrey sea serpent.

“It was about 40 feet long,” recounted L.A. Larson, first mate aboard the Rose. “It had a neck some eight feet long, a big round body, a mean-looking tail, and an evil, snaky look to its head.”

Not everyone agreed on every particular in describing the monster afterwards; J. Jensen, captain of the Rose, told the Morning Oregonian that the creature’s head looked more like that of a camel than a snake. But the witnesses agreed on most other details.

Members of the crew, after watching the strange creature with field glasses for a few minutes, wanted to launch a small boat and approach it for a better view. The officers, though, ordered them not to. The sea-serpent was big enough that it could potentially tip the boat over.

Eventually, the monster slipped away, out of sight … and into legend.

But it wouldn’t make nearly as big an impact on the public imagination as it did on the crew of the lightship. That’s probably because somebody decided to dub it “Colossal Claude,” and whoever did that would be the runaway first-prize winner in any “least interesting monster name” contest. Also, skeptical newspaper editors spilled very little ink on the monster at the time.

Three months later, a strange carcass was reported washed up on Long Beach Peninsula in southwest Washington, and there was some speculation that it could be the sea-serpent; but nothing further was printed, so it most likely turned out to be an oarfish or decomposed whale shark.

But a few years later, in 1937, the serpent was back in the news. This time, the crew of the fishing trawler Viv reported that “Claude” had reappeared, and had spent a little time studying them at close range. Captain Charles Graham described it as a “long, hairy, tan-colored creature, with the head of an overgrown horse, about 40 feet long, with a four-foot waist (diameter).”

A few months later, another report came in from a beachgoing couple named White who were visiting Devil’s Churn, 120 miles to the south. The two of them had been admiring the scenery there when they saw, just offshore, a huge hairy thing that looked like an aquatic giraffe, with a neck and maned head sticking up 15 feet above the water. They estimated it at 55 feet in overall length.

'I'm hurting for my people': Past and present Huskers react to George Floyd's death and protests

Could the Huskers turn to the junior college ranks to fill their final 2020 scholarship spot?

Amid civil unrest, Packers players speak out, hope for change

The monster then quit the scene, heading south along the shore, and the Whites ran to their car and raced after it, making for Heceta Head in hopes of catching a second glimpse. They were in luck — when they arrived, so did the creature. Then it turned and headed out to sea, and was soon lost from sight.

A year and a half went by without further reports. Then, on April 13, 1939, the crew of a fishing boat called the Argo claimed the closest sighting yet — once again just off the Columbia River. Captain Chris Anderson reported that the monster passed within 10 feet of the Argo, its head and snaky neck jutting 10 feet above the waves.

Anderson said one of his crew members grabbed a boat hook and tried to poke at it, but Anderson stopped him out of fear of making it angry.

“He could have sunk us with a nudge,” Anderson said. “His head was like a camel’s. His fur was coarse and gray. He had glassy eyes and a bent snout that he used to push a 20-pound halibut off our lines and into his mouth.”

The Argo case is the last “confirmed” sighting of the Columbia Bar Sea Serpent. Author Michael Newton found numerous other references to the monster by individuals here and there, sightings of anomalies that got attributed to being Colossal Claude whether they looked like him or not — but all these sightings seem to have petered out by the end of the Second World War.

Of course, all of these “eyewitness” sea-monster sightings could very well be nothing more than fishermen having fun at one another’s expense in waterfront taverns and bars. But there are some really intriguing aspects to the “Colossal Claude” story that provide the open-minded with some justification for not just dismissing them out of hand.

First off, there’s the number of eyewitness sightings by groups of people, in most cases people unrelated to one another. Naturally, conspiracy is not unlikely in a case like this — “Hey guys, let’s tell everyone we saw Colossal Claude!” — but it is complicated, and most conspiracies eventually unravel. These ones, if such they are, never have.

Secondly, there’s the timing. All the “confirmed” sightings of Colossal Claude happened during the spring Chinook salmon season, just off the mouth of the river. If there were a monster lurking in the waters off the Oregon Coast, given the volume of fish pouring into and out of that river that time of year, that would be where it would lurk.

It’s also interesting to note that Claude is last seen raiding a boat’s fishing nets in 1939, a couple years after Grand Coulee Dam cut most of the Columbia River’s spawning grounds off and started the destruction of the river’s salmon fishery.

But thirdly, there is a theory out there — a theory that, while unquestionably farfetched and unlikely, is actually (barely) plausible. The idea is that a colony of plesiosaurs somehow survived the Cretaceous-Paleogene Extinction Event (the one that killed off the dinosaurs) and lived on, in the depths of the ocean, for 66 million years. Somehow, according to this theory, at least one of these monsters ended up stationed in the deep waters just off the Columbia River, feeding off the salmon that poured in and out of it.

By this theory, Colossal Claude was the last of its kind, and when the easy salmon fishing ended, so did he.

Well, of course, there are lots of reasons why the likelihood of this theory being accurate are close to zero percent. Sixty-six million years is a long time, and a lot has happened in the last 66 million years — several Ice Ages, for one thing, and the Missoula Floods, for another. If Claude and all his kin had been hanging out at the mouth of the Columbia River for the last 66 million years feasting on the salmon, the construction of Grand Coulee Dam would definitely not have been the first interruption of their fish supply, nor the longest.

Then, too, plesiosaurs were not fish; they breathed air. That means they would have had to have a place to rest, out of the water, like seals do. It’s not hard to imagine what that would look like. There they would be, draped over the rocks at a secluded beach somewhere, looking like a 50-foot-long, two-ton seal with a long, snaky three-foot-thick neck and a head full of jagged, protruding teeth … what is the likelihood that something like that would go unnoticed, even on the Oregon Coast, clear up into the late 1930s?

Still, it’s a fun thing to contemplate. And, well, it would explain some things, wouldn’t it?

Sources: Strange Monsters of the Pacific Northwest, a book by Michael Newton published in 2010 by Schiffer Publishing; Portland Morning Oregonian archives from March 1934.

Interesting article, J.D. Its fun to ponder the possibilities. I disagree on one point, though: While it's true that seals/seal lions come ashore to rest, thermoregulate, and breed/rear young, there are plenty of air-breathing creatures that never leave the sea. Whales, dolphins, and manatees/dugongs don't haul out and sea turtles only come ashore to nest. So, it's very possible that plesiosaurs spent their entire lives at sea.