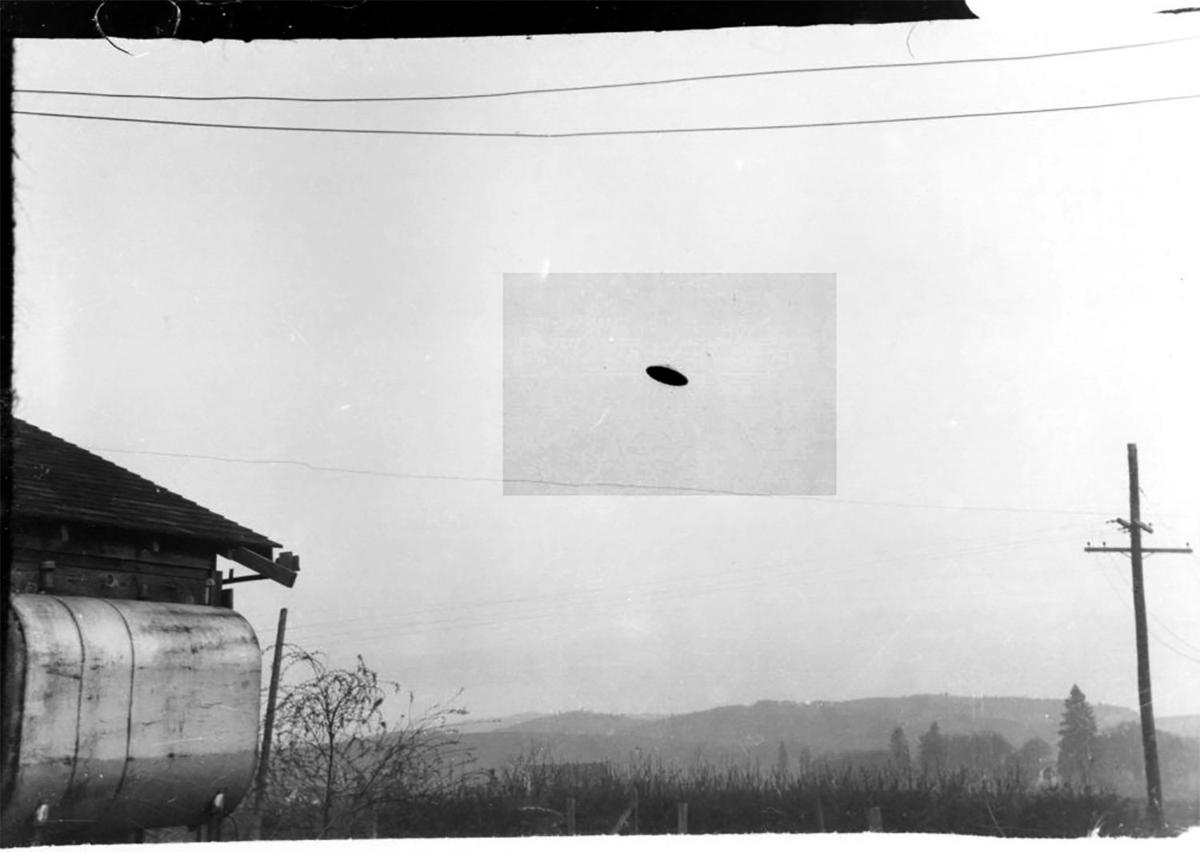 ABOVE: One of two images made by Paul Trent showing what appears to be a flying saucer visiting his McMinnville-Sheridan-area farm. The area around the UFO has been darkened to enhance its clarity. (Image: Debunker.com) 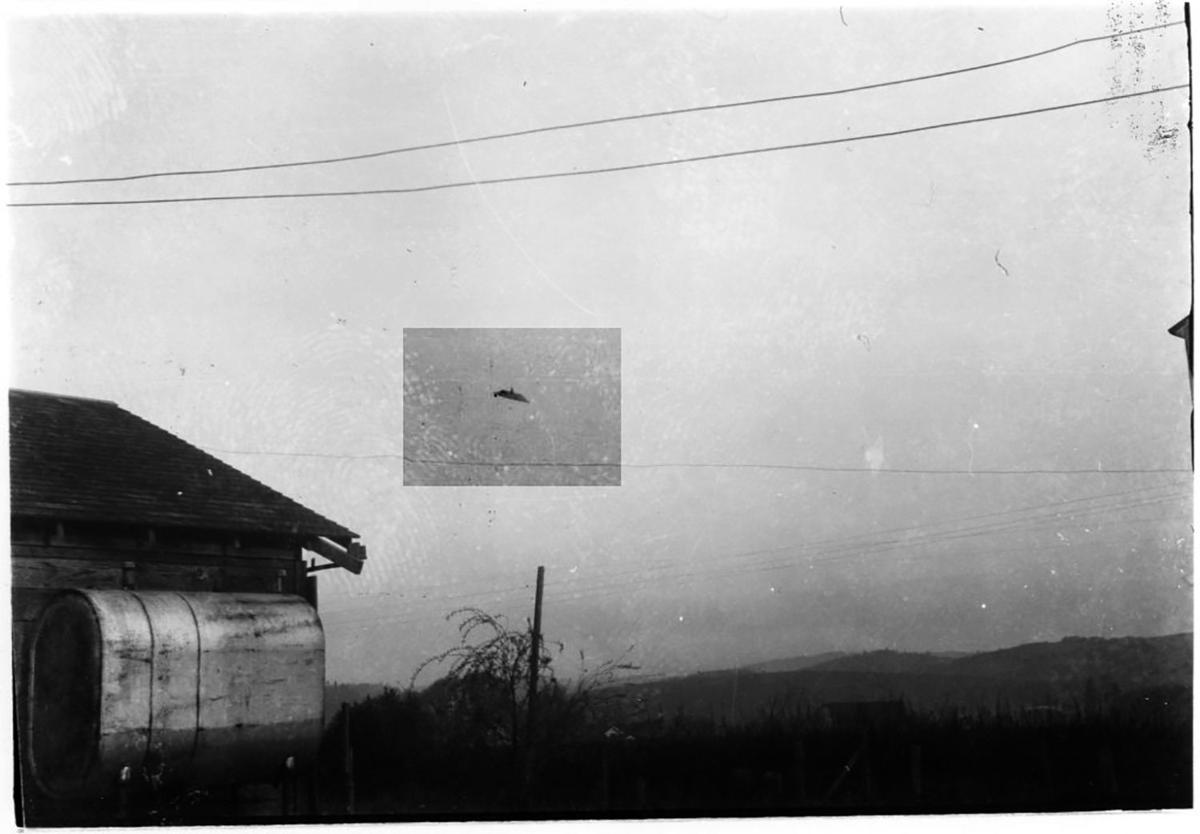 The other of the two snapshots made by McMinnville-Sheridan-area farmer Paul Trent of a flying saucer’s visit to his farm. Again, the area around the UFO has been darkened to enhance clarity. (Image: Debunker.com)

ABOVE: One of two images made by Paul Trent showing what appears to be a flying saucer visiting his McMinnville-Sheridan-area farm. The area around the UFO has been darkened to enhance its clarity. (Image: Debunker.com)

The other of the two snapshots made by McMinnville-Sheridan-area farmer Paul Trent of a flying saucer’s visit to his farm. Again, the area around the UFO has been darkened to enhance clarity. (Image: Debunker.com)

Evelyn and Paul Trent lived on a farm between Sheridan and McMinnville in the years just after the Second World War. They were, by all accounts, just plain folks — good neighbors, solid citizens — not at all the sort of people one would suspect of making up a UFO story.

That’s one of the factors that lend an unusual amount of credibility to their account of having seen — and photographed — a UFO outside their home.

On the evening of May 11, 1950, Evelyn left the house around 7:30 p.m. to do her evening farm chores. She and Paul kept chickens and rabbits and the animals needed to be fed.

Outside the house, it was a nice quiet overcast late-spring evening. The animals showed no sign of any disturbance, other than the customary mealtime eagerness. Everything seemed completely ordinary and typical ... everything, that is, except for the flying saucer hovering close over the farm a little to the northeast.

Evelyn ran back into the house to get Paul to come out and look at it. Paul took a moment to hunt up his camera — a compact folding-bellows-type camera, Universal Roamer brand, a model that took 60mm roll film (Kodak 120 or 620). He soon found it and followed Evelyn out of the house.

The UFO was still there. It was of the classic flying saucer style — a metallic disc, flat on the bottom, with a post sticking up in the center. It was hovering in the sky now drifting steadily toward the northwest. Paul shot a picture, then hurriedly advanced the film — which on one of those old cameras involved turning a small chrome knob three or four full revolutions, a process that took several seconds. By the time he was done, the UFO was accelerating toward the northwest. Paul ran several paces to keep it in sight and clicked off his second exposure as it swept on, gathering speed, and then it disappeared over the horizon.

The Trents thought what they’d seen had been some sort of government experiment, possibly a secret one, so they didn’t tell anyone about it. And film was expensive so Paul wasn’t about to pay for development of a half-shot roll or waste the few exposures he had remaining. Eventually, though, the remaining exposures were all taken — a few snapshots at a Mothers’ Day picnic finished it off — and Paul took the film in to get prints made.

The photos ignited a nationwide sensation: what appeared to be the first example of a flying saucer in action, witnessed by two people and captured on film. The national press briefly rechristened McMinnville “Saucerville,” and representatives of national media started courting the Trents. They flew to New York City to appear on live television, on “We the People.” Life Magazine ran a story. Syndicated radio host Frank Edwards, whose popular news-and-opinion show aired nationwide on the Mutual Broadcasting Network, was particularly interested in the sighting, and talked about it a lot.

The media outlets all wanted to borrow the negatives, of course, and they soon got lost. (They resurfaced several decades later, considerably damaged.)

In a field thickly crowded with sketchy characters and clever fakers, and with an equal number of skeptics and debunkers, the Trents’ story and pictures have never quite fit in. The Trents themselves were clearly solid citizens. Although they seemed at first to enjoy their moment in the sun, they never much seemed to welcome it and soon became obviously tired of the attention.

The years ticked by. The Trents got back to their lives and the hubbub settled down. The topic of UFOs, though, was just starting to heat up. By the end of the decade, thousands of people were claiming to have sighted alien spacecraft in the sky, and the usual hordes of imaginative charlatans were crowding the field with claims and hoaxes of widely varying degrees of believability.

Kentucky's stout defense will be a test for Missouri's new QB

During this time, the U.S. Air Force had been trying to get a handle on the issue. This was proving hard to do. Nearly everyone had a strong opinion on the subject and a high degree of contempt for the opposite position.

Finally, in 1965, the Air Force found a legitimate university with a well-credentialed physicist who would be willing to undertake a thorough study of the matter — Dr. Edward Condon of the University of Colorado.

Condon’s report was released in 1968 and pretty much firmly established UFOlogy as a “border science,” well outside the mainstream. Of course, UFO enthusiasts countered that Condon had strong confirmation bias to contend with — if he had ended up concluding that UFOs were real, they claimed, his academic reputation would have been ruined. So, he had a strong incentive to minimize the evidence in favor and maximize the evidence against. They professed themselves unsurprised when he concluded that there was insufficient evidence to consider UFOs as a reasonable possibility.

Even so, Condon’s report admitted that it was unable to falsify the Trent photographs, or find damaging inconsistency in the story they’d told in the countless interviews they’d given in the year or two after their sighting.

“This is one of the few UFO reports in which all factors investigated, geometric, psychological, and physical, appear to be consistent with the assertion that an extraordinary flying object, silvery, metallic, disk-shaped, tens of meters in diameter, and evidently artificial, flew within sight of two witnesses,” the report noted.

However, it did leave open the possibility that the object had been a model suspended from an overhead line one or two dozen feet from the camera — a theory that continues to resonate with skeptics today.

By giving grudging praise to the Trent photographs, the Condon Report brought them to the attention of a new cadre of amateur debunkers. Over the decades that followed, numerous theories emerged. A trash can lid on a string, a side-view mirror from a 1947 Ford pickup, and so on.

The Trents both died in the late 1990s and both insisted until the end that the photos were legitimate. And, even today, amateur analysts are disagreeing about whether they were lying. The conclusions these analysts have reached, so far, have been very predictable. Confirmed skeptics conclude definitively that the whole thing was a hoax and confirmed UFO believers assert positively that the photos were demonstrably real.

All the intense scrutiny over the years has successfully proven only one thing — that the photos are extraordinarily resistant to being definitively debunked — or, for that matter, confirmed.

But then, the McMinnville UFO sighting is a bit like the D.B. Cooper mystery. If someone ever were able to put the question to rest, the whole thing would probably stop being interesting. And if that ever happened, the annual McMinnville UFO festival — held for the past two decades or so on the first full weekend after May 11 — might dry up and blow away, which would be a real tragedy. So really, the whole thing is probably better left as a tantalizing mystery.

— Finn J.D. John teaches at Oregon State University and writes about odd tidbits of Oregon history. For details, see http://finnjohn.com. To contact him or suggest a topic: finn2@offbeatoregon.com or 541-357-2222.