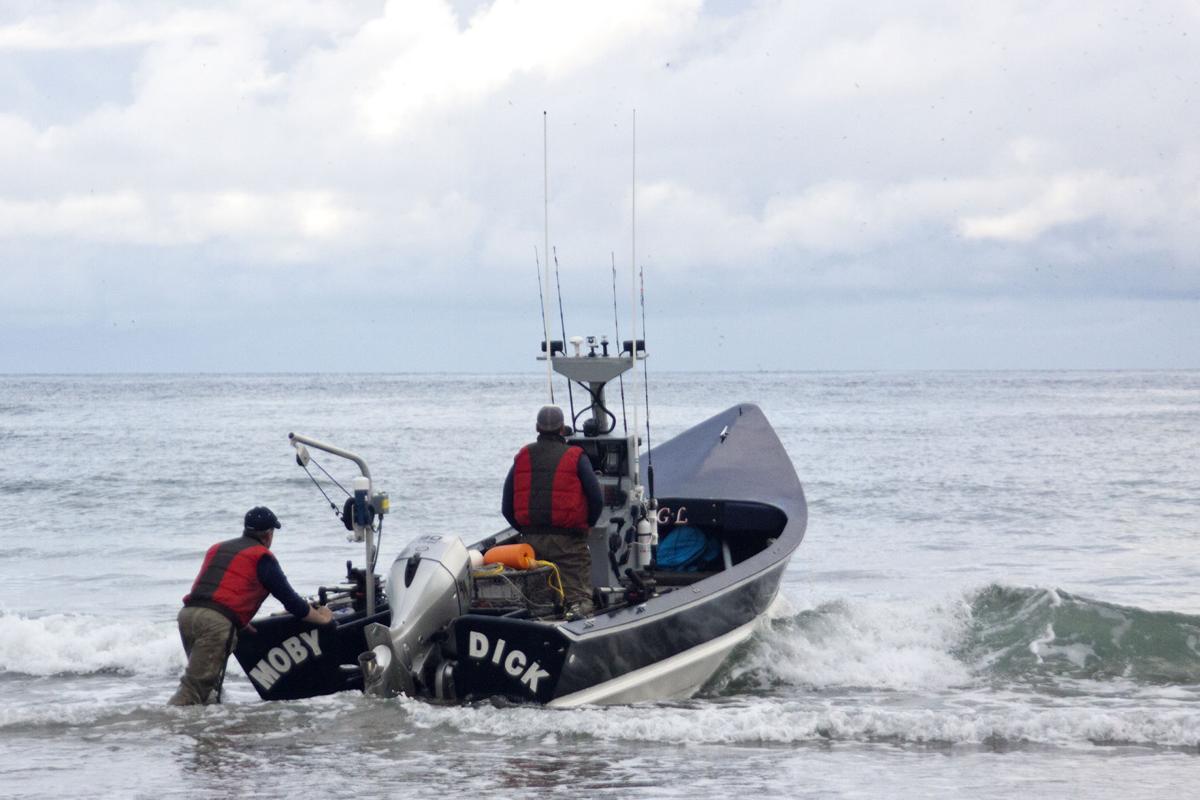 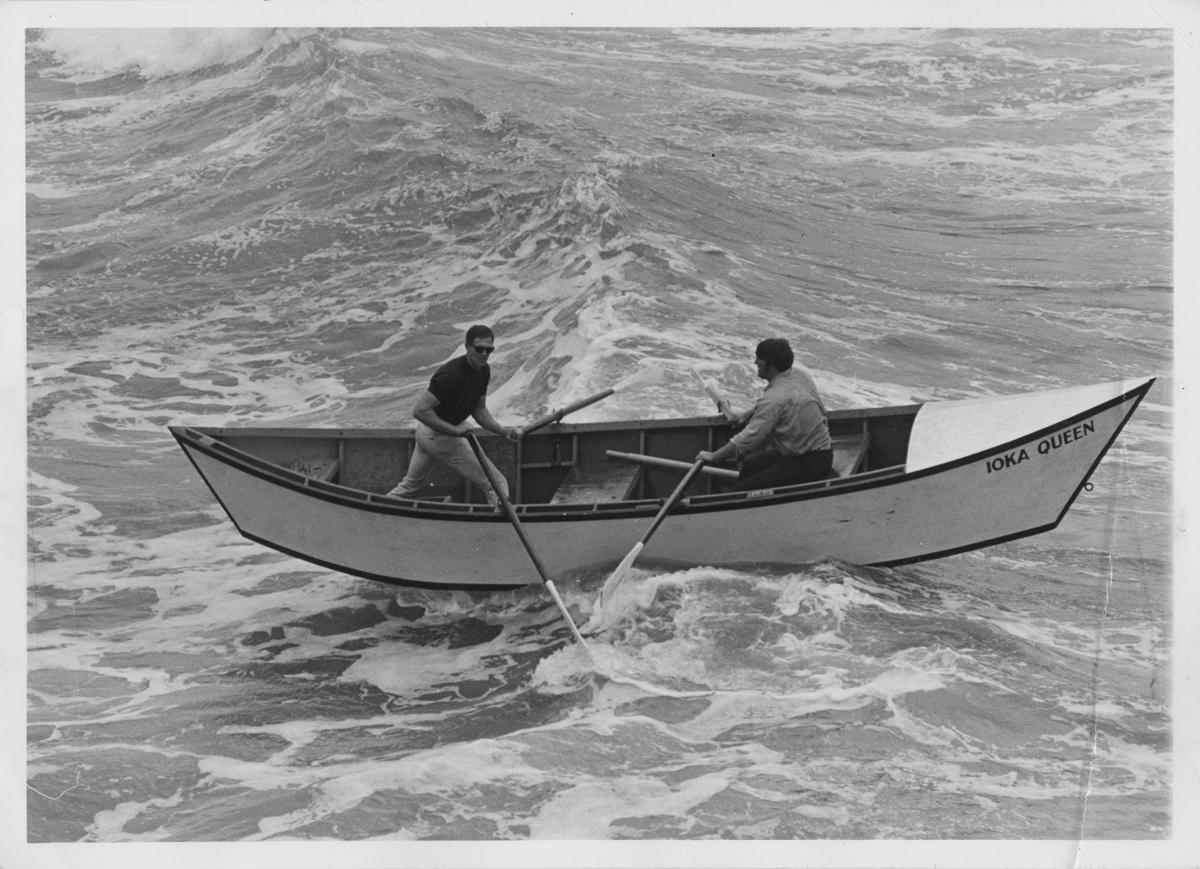 Paul Hanneman (left) and Craig Hanneman row the Ioka Queen in the 1972 Dory Derby double-ender rowing race. The Ioka Queen was built by the Hanneman family in 1969 and was owned by Barbara Hanneman of Salem. 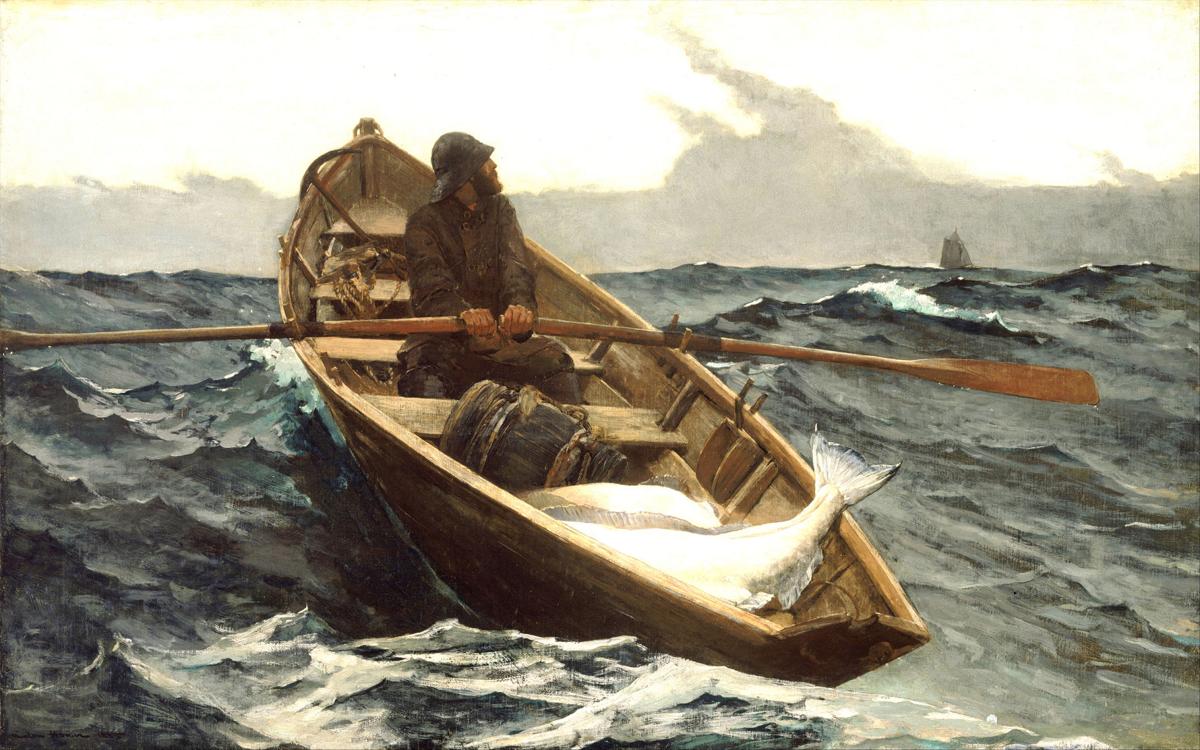 This painting, titled “The Fog Warning,” shows a Grand Banks fisherman making his way back to the mother ship with a couple big halibuts on board, while casting a worried glance at an incoming fog bank.

Paul Hanneman (left) and Craig Hanneman row the Ioka Queen in the 1972 Dory Derby double-ender rowing race. The Ioka Queen was built by the Hanneman family in 1969 and was owned by Barbara Hanneman of Salem.

This painting, titled “The Fog Warning,” shows a Grand Banks fisherman making his way back to the mother ship with a couple big halibuts on board, while casting a worried glance at an incoming fog bank.

If you get up early enough in the summertime in Pacific City, you might get to watch the Cape Kiwanda dory fleet launching for a day of fishing — launching right off the beach, into the teeth of the surf.

There’s no fishing fleet quite like the Cape Kiwanda dories. On a good day, there can be dozens of them. These days, it’s a pretty slick operation to watch — a tow vehicle will rapidly back into the teeth of the surf to launch the boat between the waves, then hastily retreat. Two crew members will then expertly spin the boat to get its bow pointing into the waves and head off into the teeth of the surf, angling through the incoming breakers, outboard motor roaring, headed for wherever the fish are biting.

Bringing the boat back in is even more fun to watch. The boat operator gets the dory into the crest of a wave and basically surfs ashore, pulling the outboard up as the beach nears so it won’t foul in the sand. If they get it just right, the boat ends up high and almost dry, ready to be winched onto the trailer.

It looks like risky, fast-paced fun for skippers who have the skill and practice to pull it off. But it wasn’t always so quick and easy. The Cape Kiwanda dory fleet is one of the oldest fishing operations in the state. It dates back to the late 1800s.

THE CAPE KIWANDA DORY has changed a lot over the last 120 years or so. The first ones were Grand Banks dories, of the type used in the cod fishery off Newfoundland, a double-ender high in the bow and stern, wide, with lots of rocker underneath, looking a lot like a modern McKenzie River driftboat.

The Grand Banks dories were designed that way for very practical reasons — with a good hand at the oars they could handle virtually any sea, and they stacked together on the deck of a fishing schooner like plastic drinking glasses.

The locals soon modified the design to suit their particular needs, and they’ve been continually modifying it ever since. Many of the dories that are hitting the beach today look almost nothing like the original double-end Grand Banks dories they’re descended from.

“No one seems to know how the present Kiwanda dory evolved,” wrote Portland Oregonian wildlife editor Don Helm in his 1968 article, “but it revolutionized the sport and made Pacific City the dory capital of the world.”

Compared with a Grand Banks dory, the early Cape Kiwanda model had more freeboard and taller ends, and even more rocker. By the 1910s Pacific City dorymen had just about settled on a design that was 18 to 20 feet long, with two sets of oars rather than just one.

And they needed that extra freeboard and power. Unlike the Grand Banks, the Oregon Coast is a lee shore. That means the wind blows toward it rather than away from it. So the waves are bigger, and it’s much harder to get through the surf. One of the reasons West Africa’s “Skeleton Coast” was so deadly to shipwrecked sailors, back in the days of sail, was that it was also a lee shore, and sailors stranded on it found it impossible to launch lifeboats and rafts through its breakers.

What made it possible to launch dories in Pacific City was, the headland at Cape Kiwanda juts out into the sea at an angle. In the lee of that angle, during the summer when the winds are out of the northwest, the surf is calmer. On mild summer days, it’s actually calm enough to safely launch a rowboat off the beach.

Wyoming home football game against Utah is off due to pandemic

(Fishermen have also sometimes launched dories out of Port Orford, where the headland serves a similar sheltering function.)

So they would push their dories out into the surf as far as they could, wait for a breaker to rush past, scramble into the dory while it lay in the trough and race to get into position at the oars before the next one arrived. Then, they’d laboriously row through the breakers and out into the open sea, making their way to the fishing grounds, catch what they could and then head back in. If the wind was brisk, they might hang a piece of canvas from a pair of oars and let Mother Nature do some of the work for them.

Once in a while, the dorymen would arrive at the “slot” between the cape and “Haystack Rock” (Chief Kiawanda Rock) to find the surf had kicked up while they were out, and they’d have to stay out all night waiting for it to calm down.

OVER THE YEARS since, the Cape Kiwanda dory continued to evolve. When outboard motors became available, dorymen started building motor wells into their boats, they didn’t use the motors at launch time, but it sure was nice not to have to row for hours to get to wherever the fish were running.

Then, around 1960, somebody decided to try something different — and built a square-ended dory. It was an incongruous-looking thing, like someone had glued the front end of a dory to the back end of a utility scow.

The locals looked at it and shook their heads. But after they saw how it worked, most of them started making plans to get one like it. With a powerful outboard on that square stern, the launch was a breeze — you didn’t even need the oars. And the hull, with a big enough motor, would lift out of the water and skim like a speedboat.

Whoever did this should have patented the design, because it set Pacific City’s dory fleet on its ear. From a fleet of a dozen or so old-school double-enders in the 1950s, the dory fleet exploded in the 1960s. In 1968, one out of every three new boats licensed in Oregon was a Cape Kiwanda Dory.

Today, the fleet includes about 250 dories, according to the Pacific City Dorymen’s Association. The fleet’s fortunes have risen and fallen with the fishery — salmon conservation measures adopted in the 1990s hit the fleet hard, especially the commercial operators — but it’s still one of the most productive fishing operations in the state.

Several charter-fishing operations also offer guided fishing trips in dories launched from the beach, and a number of members of today’s dory fleet bought a dory and joined the happy throng after taking one. But anyone who does that would be well advised to get as much help and advice as possible before trying a beach launch for the first time. The old hands make it look easy … but it’s not.

“There’s nothing like a greenhorn,” Capt. Dave Stiles told Chris Forrer of Linfield College in a 2011 interview. “I go down there every time I know a greenhorn’s going out. I’ve seen ‘em almost kill themselves. I had to go out and rescue ‘em.”

Sources: “The Dory Comes to Oregon,” an article by Don Helm published in the July 14, 1968, issue of the Portland Oregonian; “Launching Through the Surf: The Dory Fleet of Pacific City,” an oral-history project by Linfield College, digitalcommons.linfield.edu/dory; pcdorymen.com