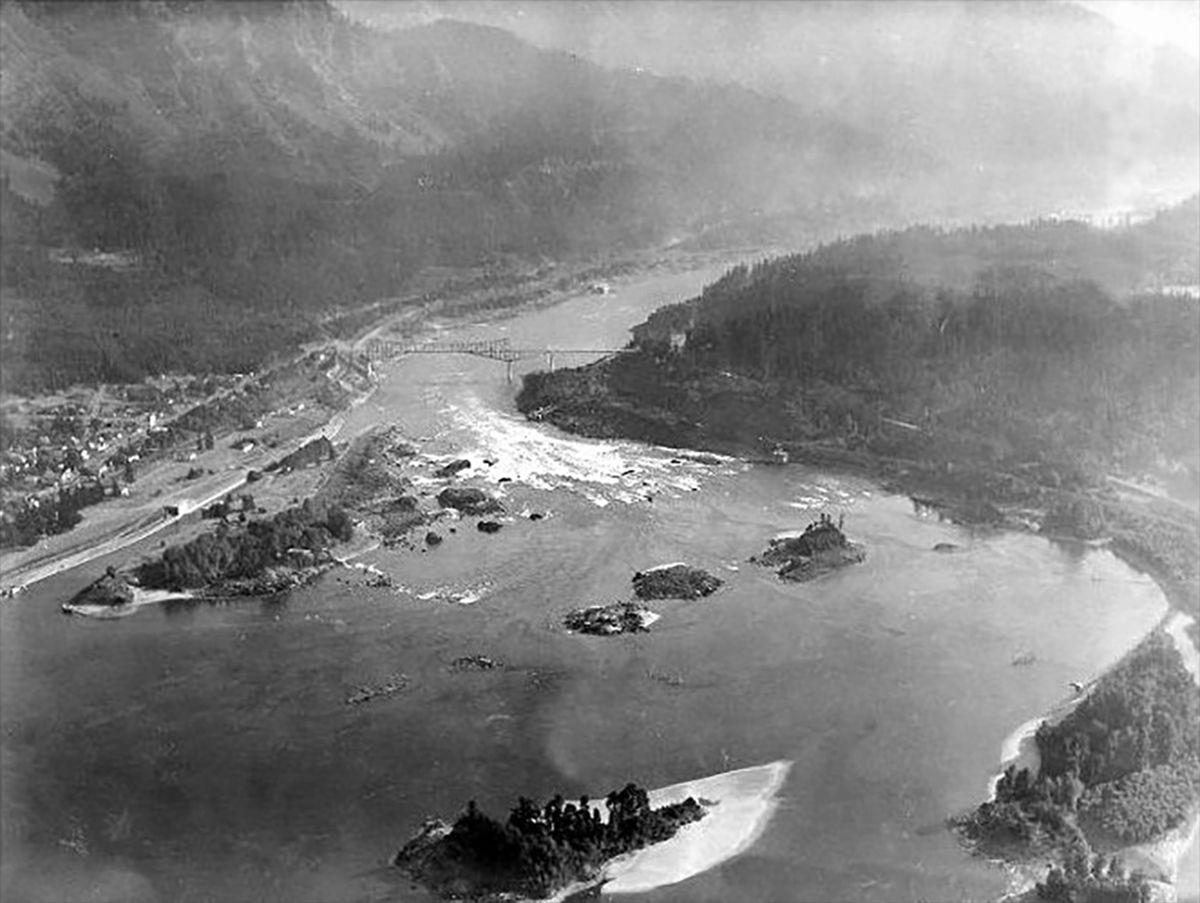 The top of the Cascade rapids as they appeared in 1929, shot from an airplane flying around 2,000 feet. The mountainous toe jutting out from the right is the Bonneville Landslide; the broad expanse of river in the foreground is what remains of the impoundment the landslide formed. (Submitted photo/U.S. Army Corps of Engineers) 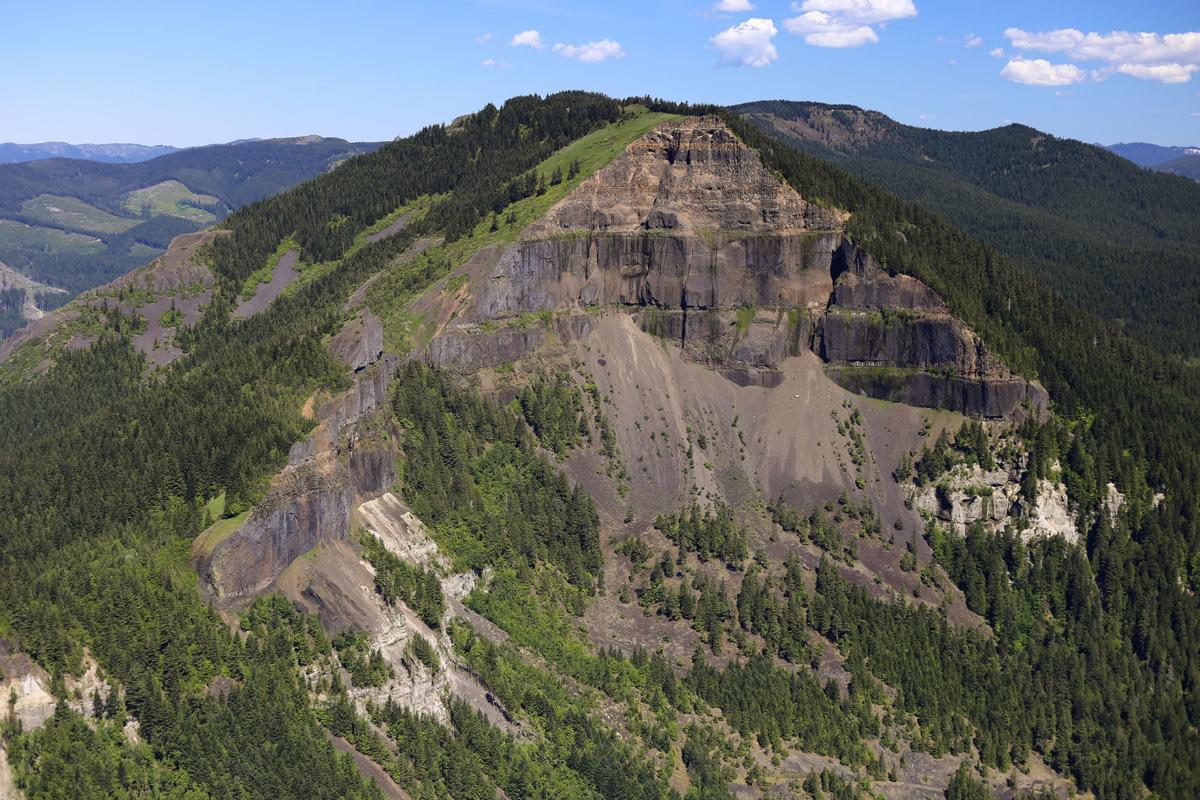 The southern face of Table Mountain, including the cutaway area from which the Bonneville Landslide split off. (Submitted photo/Eric Prado) 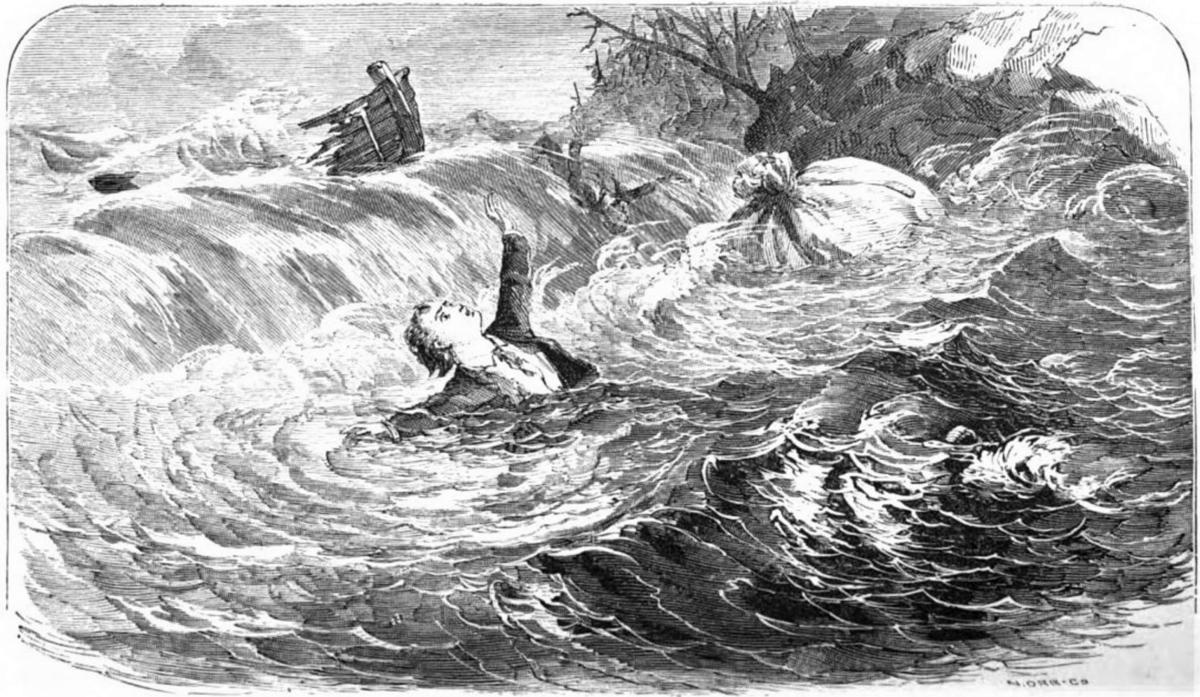 The top of the Cascade rapids as they appeared in 1929, shot from an airplane flying around 2,000 feet. The mountainous toe jutting out from the right is the Bonneville Landslide; the broad expanse of river in the foreground is what remains of the impoundment the landslide formed. (Submitted photo/U.S. Army Corps of Engineers)

The southern face of Table Mountain, including the cutaway area from which the Bonneville Landslide split off. (Submitted photo/Eric Prado)

The opening scene of The Warlord of Mars, Edgar Rice Burroughs’ third “John Carter of Mars” book, has the hero paddling up the great River Iss as it flows out of a long, dark underground passage, in hot pursuit of a suspected spy.

It is very likely that Burroughs — who spent some time in the late 1800s as a cowboy and later a gold-dredge operator in the Snake River country of Idaho and Eastern Oregon — got the idea for this feature from the Native American legends of the “Bridge of the Gods,” on the Columbia River.

The legend — or legends, rather, since there are as many different versions as there were Indian tribes near the river — tells of a long tunnel beneath a mountain, through which the river once ran.

“The Indians here have a tradition,” wrote Rev. Gustavus Hines in 1859, “that a long time ago the mountain was joined together over the river, and that the river performed a subterraneous passage for some distance, with a slow current, and that their people used to pass up and down with their canoes without difficulty.”

During this time, the Indians apparently used the tunnel with considerable trepidation, though.

“The Klickitats on the Yakima Reservation told their friend Lucullus McWhorter, probably 30 years ago (circa 1920), about their ancestors’ method of travel through the gorge,” Ella E. Clark wrote in her 1952 article in the Oregon Historical Quarterly. “All occupants of the canoes, except those necessary to man the oars, would land when they neared the bridge or tunnel, walk around to the opposite side, and reembark there. The oarsmen always told their friends goodbye, fearing that the destruction of the bridge, prophesied by the medicine men, might take place at any moment.”

An elderly woman from the Wishram tribe, interviewed in 1927, said her family legends say the tunnel was so long, and so dark, that tribe members had to tie their canoes together to avoid crashing into each other.

Then one day, she added, one of her ancestors, fishing from the bank by The Dalles, felt the earth shake, and saw fire blasting from the mountains.

“Soon the water began to rise higher and higher, the river to become deeper and broader,” Clark writes. “Then an Indian runner appeared. ‘The bridge has fallen!’ he called out. ‘The Great Spirit has spoken!’”

Another Indian legend, recounted by a railroad surveyor named George Gibbs, also says the collapse was accompanied by a double volcanic eruption: “Mount Hood and Mount St. Helens, they said, were man and wife,” Clark writes. “They quarreled and threw fire at one another, St. Helens being the victor. Since then Mount Hood has been afraid, for St. Helens has a strong heart and still burns.”

Pioneer James Strong, who spent 1854 in Yakima country and got to be good friends with a very old Yakima man, quotes him saying, “When I was a small boy, my grandfather, then an old man, told me that he remembered perfectly well when the Columbia at the Cascades ran under the land and there were no rapids. The spirit of Mount St. Helens and the spirit of Mount Hood used to go across the natural bridge to visit each other. But one day the spirit of St. Helens became angry and shook it down.”

There are many more legends of the Bridge of the Gods, most of them featuring some sort of romantic triangle or marital discord among the nearby mountains that resulted in the destruction of the bridge. They differ in many ways, but every single one of them includes the underground-river feature, and the collapse forming the Cascades — the two-mile stretch of rapids in which early pioneers on the Oregon Trail had so much trouble. The Cascades were submerged by the impoundment behind Bonneville Dam in the 1930s, but while they existed they were a formidable obstacle — the river narrowed to 450 feet wide and dropped 40 vertical feet in just two miles.

Being as the Cascades were two miles long, it seems likely that the tunnel, if it existed, was at least that long.

But, did it exist?

The scientific consensus is largely skeptical about the tunnel story. Geological evidence shows that around 1450 A.D. a massive landslide off Table Mountain, on the Washington side, buried the river under a massive heap of debris, covering 5½ square miles and rising 200 feet above the river — three times the height of Bonneville Dam.

The river then slowly rose behind this obstacle — taking, perhaps, years to do it — creating a lake-like impoundment and flooding a bunch of forest land. Finally, the river over-topped the barrier at the southern end; rapid erosion carved a new narrow channel between rocks (releasing a great flood downstream) and forming the Cascades. And all of this would have happened in the mid-1400s.

So far, no one has found actual geological evidence of the Columbia going underground. But, of course, absence of evidence is not the same as evidence of absence.

Moreover, the structure of Table Mountain is like a great tilted birthday cake, with thick layers of Columbia basalt sandwiching layers of softer clay and rubble.

2020 Bears vision: Need is dire to get far greater contributions from TE corps

“What you’ve got is a deck of cards that is pointing and sliding toward the river,” Alex Bourdeau, an archaeologist with the U.S. Fish and Wildlife Service, told an Oregonian reporter in 1999.

It’s not hard to imagine the great slabs of granite falling into the old riverbed, leaving a tiny core of soft clay and soggy river silt running all the way through at the base of the great dam — the mounting pressure of the impounded water slowly making headway through it — and, eventually, a drop or two leaking out the other side.

Once that happened, it would have been a matter of time, and not much of it, before the entire river was roaring through that little hole in the hillside.

And in fact, there is one Indian legend that follows that scenario with almost uncanny precision:

“Among the Colvilles,” Clark writes, “is the tradition that a lake once covered what is now the valley of the Columbia and its tributaries — a vast lake separated from the Pacific Ocean by the Cascade Mountains. Coyote, hero and demigod in hundreds of Indian tales, dug a tunnel through the mountains in order to make it possible for salmon to come up to his people. The draining of the lake formed the Columbia River. The rocks over the tunnel were shaken down by an earthquake; thus the rapids were formed.”

Science has not yet found confirming evidence that the Columbia River flowed, like Edgar Rice Burroughs’ fictional River Iss on Mars, through a miles-long underground channel. But to believe that it never did, one has to ignore the folkloric testimony of every Native American culture that would have experienced such a tunnel firsthand.

Now, granted, one piece of folklore is pretty poor evidence, and two are not much better. But when every single folk tale tells the same story, and there’s no hard geographical evidence to rule it out — what are the odds it’s not true?

(Sources: “The Bridge of the Gods in Fact and Fancy,” an article by Ella E. Clark published in the March 1952 issue of Oregon Historical Quarterly; “Landslide blocks the Columbia River in about 1450,” an article by David Wilma published in June 2006 at HistoryLink.org)