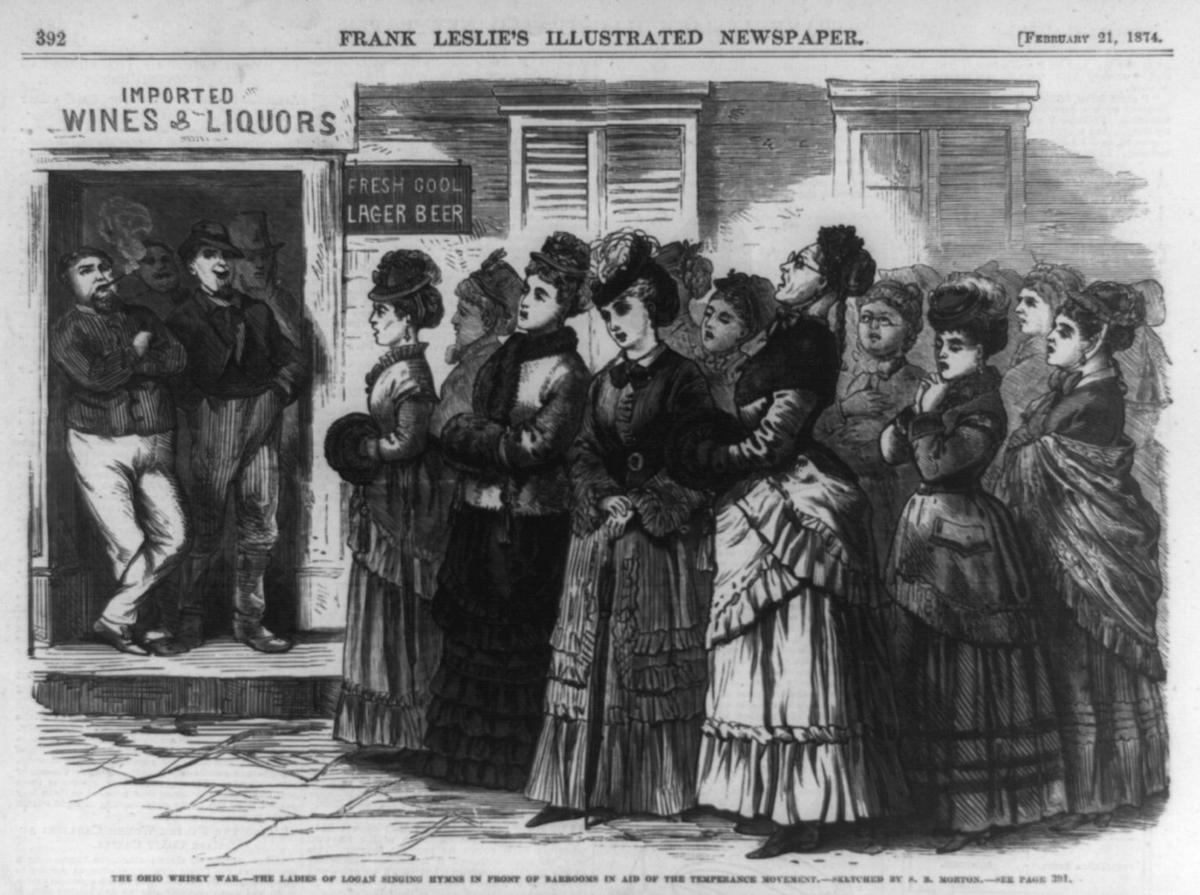 This drawing, from an 1874 issue of Frank Leslie's Weekly, shows the Ohio ladies who were the Portland temperance workers' primary inspiration, singing and praying before a saloon. This scene, drawn by S.B. Morton, is set in Logan, Ohio. 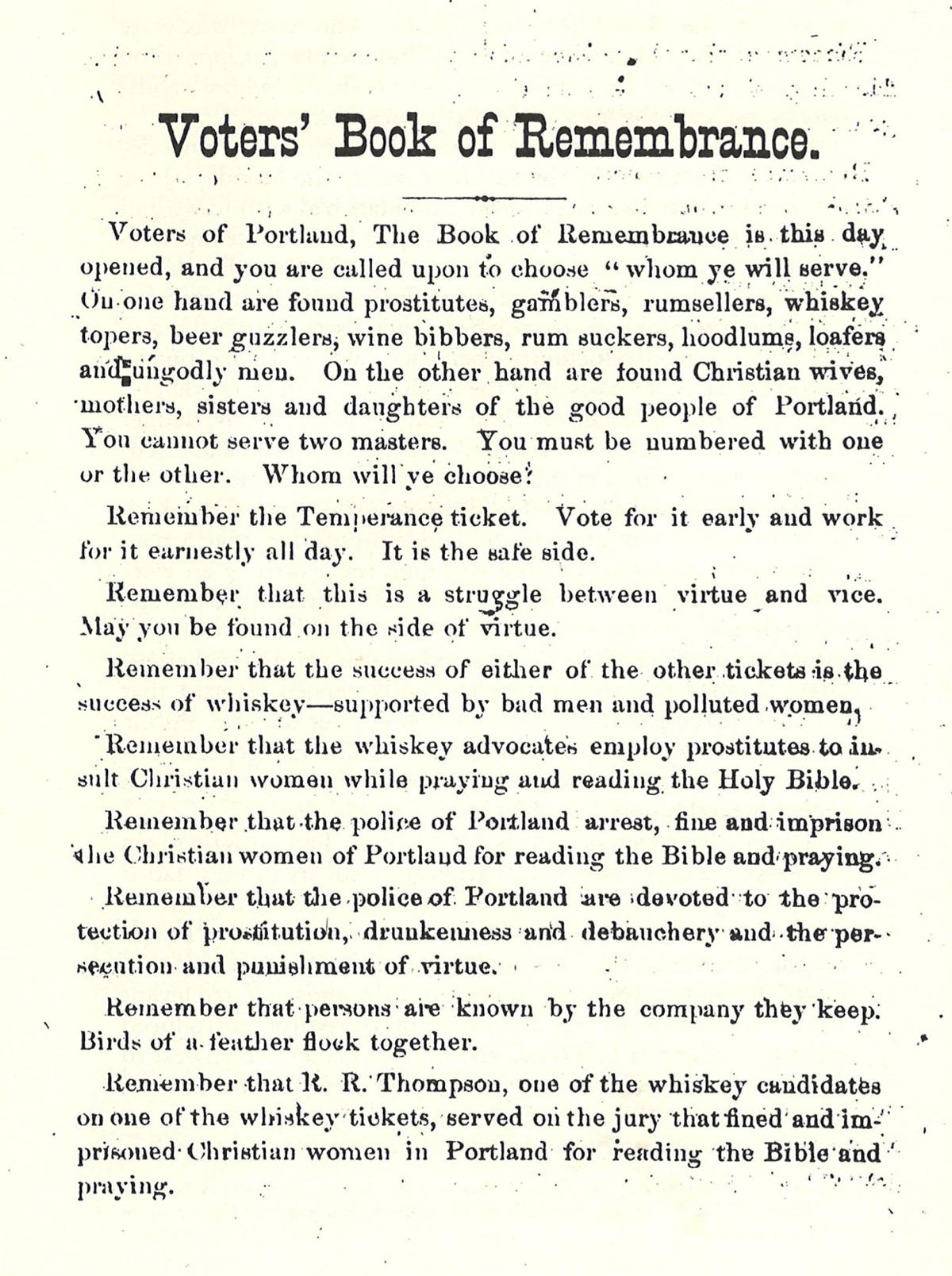 The first page of the “Voters’ Book of Remembrance,” A.C. Edmunds’ double-sided election’s-eve flyer, which insulted Portland voters badly enough to turn them off both temperance and women’s suffrage for nearly 40 years.

This drawing, from an 1874 issue of Frank Leslie's Weekly, shows the Ohio ladies who were the Portland temperance workers' primary inspiration, singing and praying before a saloon. This scene, drawn by S.B. Morton, is set in Logan, Ohio.

The first page of the “Voters’ Book of Remembrance,” A.C. Edmunds’ double-sided election’s-eve flyer, which insulted Portland voters badly enough to turn them off both temperance and women’s suffrage for nearly 40 years.

A.C. Edmunds’ experience in Portland before the Civil War had been so short, and by his personal standards so uneventful, that the turf there was for all practical purposes unburned.

Considering what had happened to every other organization he’d worked for, that was to prove a great misfortune for his fellow travelers in Stumptown. Edmunds was the “own-goal” champion of Oregon history — in California and Oregon he had already delivered serious setbacks to at least two Universalist Church groups for which he had worked, through his uncanny ability to alienate the public, and had come very close to ruining things for a third. He’d also launched half a dozen publishing ventures, all of which started out strong but fizzled when important backers withdrew their support. He was, essentially, the worst kind of political activist: absolutely convinced of the righteousness of his cause, and intransigently opposed on moral grounds to any compromise whatsoever with the “forces of evil” that opposed it.

He was a compulsive activist looking for a cause. And when he arrived, late in 1873, his timing could not have been better. The city was alive with the fervent spirit of reform — just the sort of environment in which Edmunds most thrived. Plus, the topic of reform was one of his regular hobby-horses: Temperance.

The society ladies of Portland, inspired by reports of the great temperance movements back east, had organized themselves through the main downtown Protestant churches into the Women’s Temperance Prayer League. The plan: Members of the League would fare forth into the city each day and visit a saloon. There, they would hold a prayer service, plead the cause of temperance to its owner and patrons, circulate a pledge to abstain from alcohol consumption in future, and move on.

It took a little while for the ladies to get their program dialed in just right, but by the spring of 1874 it was hitting nicely on all twelve cylinders and sending ripples of fear through Portland saloon owners.

Their intervention led at least two saloon owners to quit the business. But, more importantly, it enraged one particular saloon owner — Walter Moffett, owner of the Webfoot Saloon. Moffett’s scandalously ungentlemanly behavior on the frequent occasions when the ladies came to see him not only inspired the ladies’ determination to wear him down, but also galvanized public opinion in Portland against the saloons, and in favor of the ladies — and temperance.

The ladies were still riding that wave of popular support and esteem as the election day for Portland City Council positions drew near.

There were at least two slates of candidates for the Council seats: a reform-oriented Republican one, and a “People’s Ticket” that was generally stocked with liquor-business-friendly candidates. (The Democratic party did not put forth a ticket.)

Several sources also claim there was a Temperance ticket as well. That’s probably not correct. The temperance crusaders, according to historian Belknap, made the practical decision to work with the reform-minded Republicans rather than trying to field their own slate of vote-splitting Temperance candidates. None of them were happy with this decision, of course — they would much rather have a slate of pure-hearted teetotalers to vote for — but they knew if they found and put one forward, the liquor ticket would ride to easy victory over a divided opposition.

But this was exactly the sort of practical compromise that always seemed to bring out the worst in A.C. Edmunds. And it seems to have, in this situation, done just that.

Shortly before the election, Edmunds stepped forward with a small essay that he proposed to have printed and circulated on Election Day, which he assured the ladies would tip the balance and assure them the win.

The circular was titled “The Voter’s Book of Remembrance.”

“Voters of Portland, the Book of Remembrance is this day opened, and you are called upon to choose ‘whom ye will serve,’” it starts out. “On one hand are found prostitutes, gamblers, rumsellers, whiskey topers, beer guzzlers, wine bibbers, rum suckers, hoodlums, loafers and ungodly men. On the other hand are found Christian wives, mothers, sisters and daughters of the good people of Portland. You cannot serve two masters. You must be numbered with one or the other. Whom will ye choose?”

It actually gets worse as it goes on, blatantly accusing Portland’s police of being “devoted to the protection of prostitution, drunkenness and debauchery, and the persecution and punishment of virtue” and claiming that “whiskey advocates employ prostitutes to insult Christian women while praying and reading the Holy Bible.”

By modern standards of campaign polemics, it’s not that far out of line. But when it was released, it put the entire city — the male half, at least, the half that was legally allowed to vote — into a cold fury.

The result was an electoral pounding for the ages. The least temperance-friendly slate of candidates was swept into office by a landslide. And the hostility was so bad that the Women’s Temperance Prayer League dissolved.

Unfortunately, while it had existed, the Prayer League had done a yeoman’s job of hitching its wagon to the women’s-suffrage star. The events of 1874 left most male voters with the clear belief that if women ever did get the right to vote, they’d use it to cram Prohibition down everyone’s throats. That’s why several historians, including Belknap, have suggested that the “Temperance Riots” set the cause of women’s suffrage back a whole generation, or maybe even two.

Edmunds was, of course, persona non grata in temperance and suffragist circles after this. Not only had his tactic backfired, but some fairly credible rumors started to circulate that he had done it deliberately to punish his allies for having been willing to work with the ideologically impure Republican reformers.

So, back on the lecture circuit he went; by this time, he had turned against religion, and now he brought the same savagery and self-righteous fury to the cause of atheism that he had once rallied to the standard of “Black Republicanism” and Universalism.

In 1877 he took up the cause of trade-unionism, assumed the pen-name “Portland Mechanic,” and set about leading the foundation of what would become The Workingmen’s Club of Portland. The organization, though, once formed, ejected him from membership within six months.

Finally, in 1879, during a lecture tour in California where he was speaking on labor issues, A.C. Edmunds suffered a paralytic stroke and died. He was just 51 years old.

He left behind a remarkable record of negative achievement. Like the Stormy Petrel of marine mythology, he brought trouble with him everywhere he went, and his record of own-goals has yet to be topped. His heart may have been in the right place, but plenty of his fellow activists and co-religionists in Oregon, California, and back East must have wondered, “With friends like him, who needs enemies?”