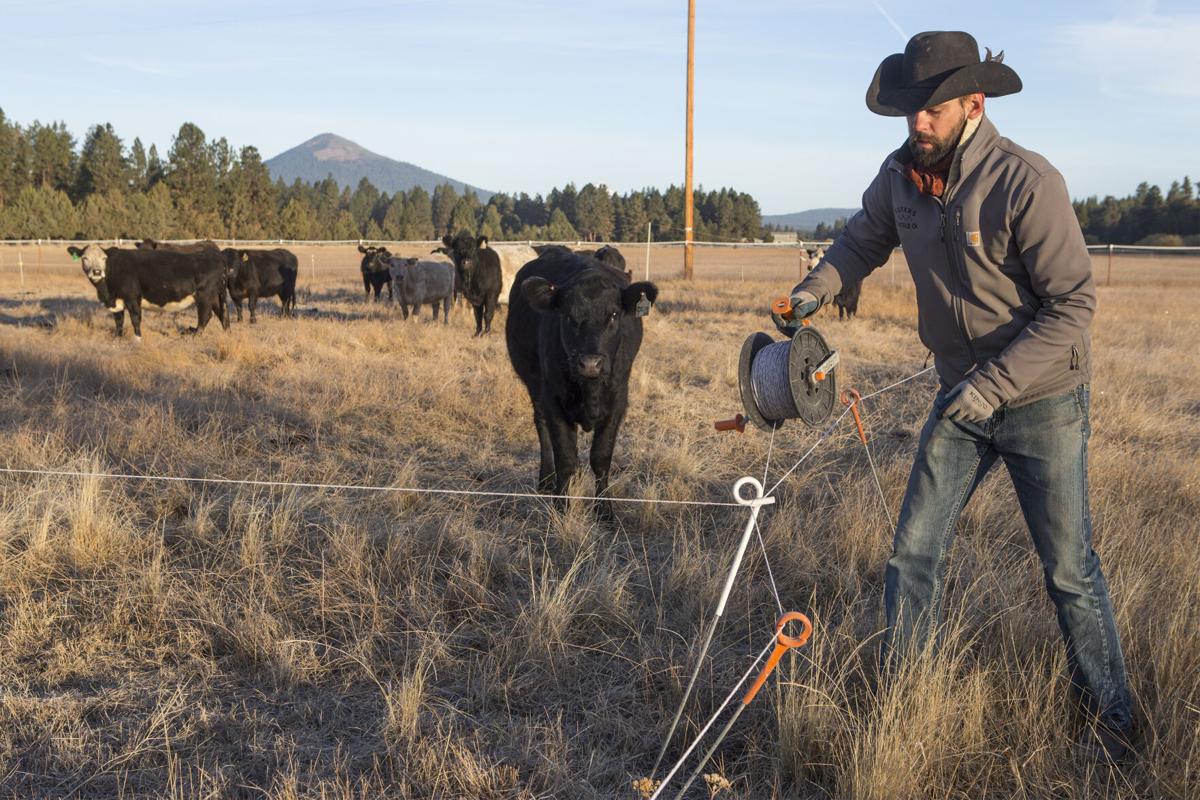 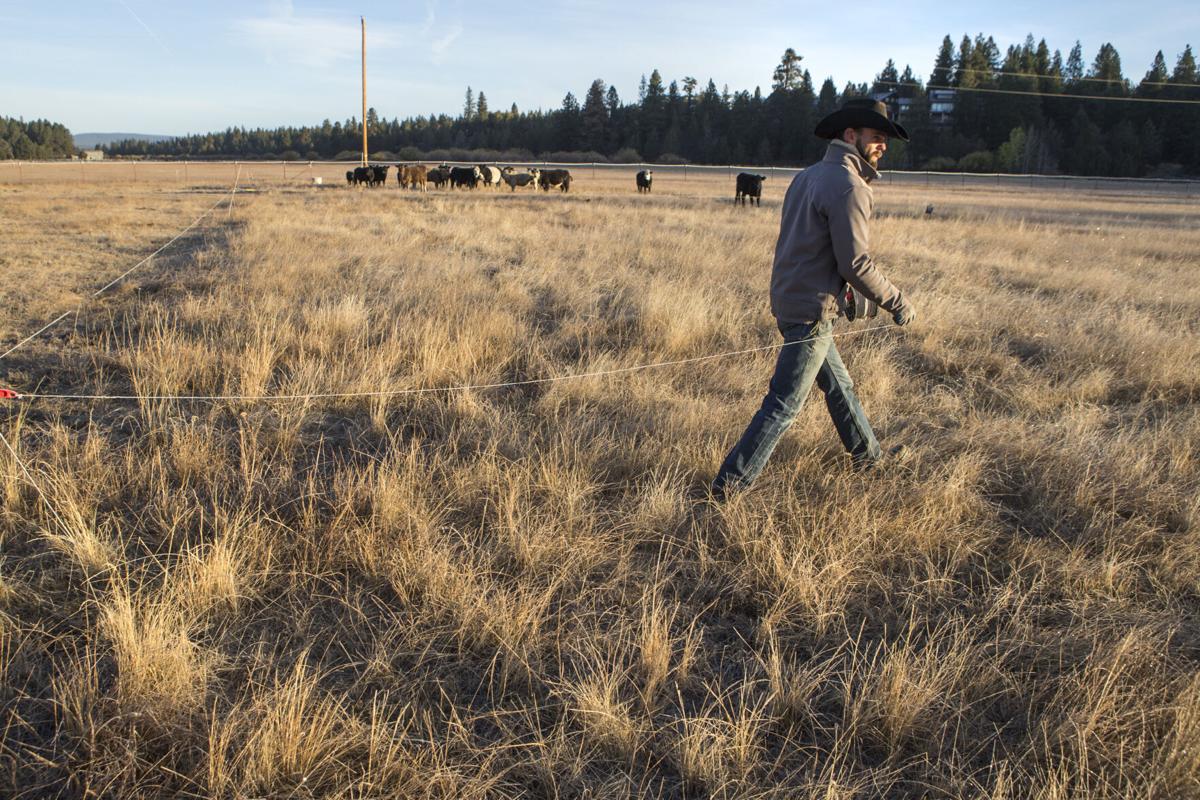 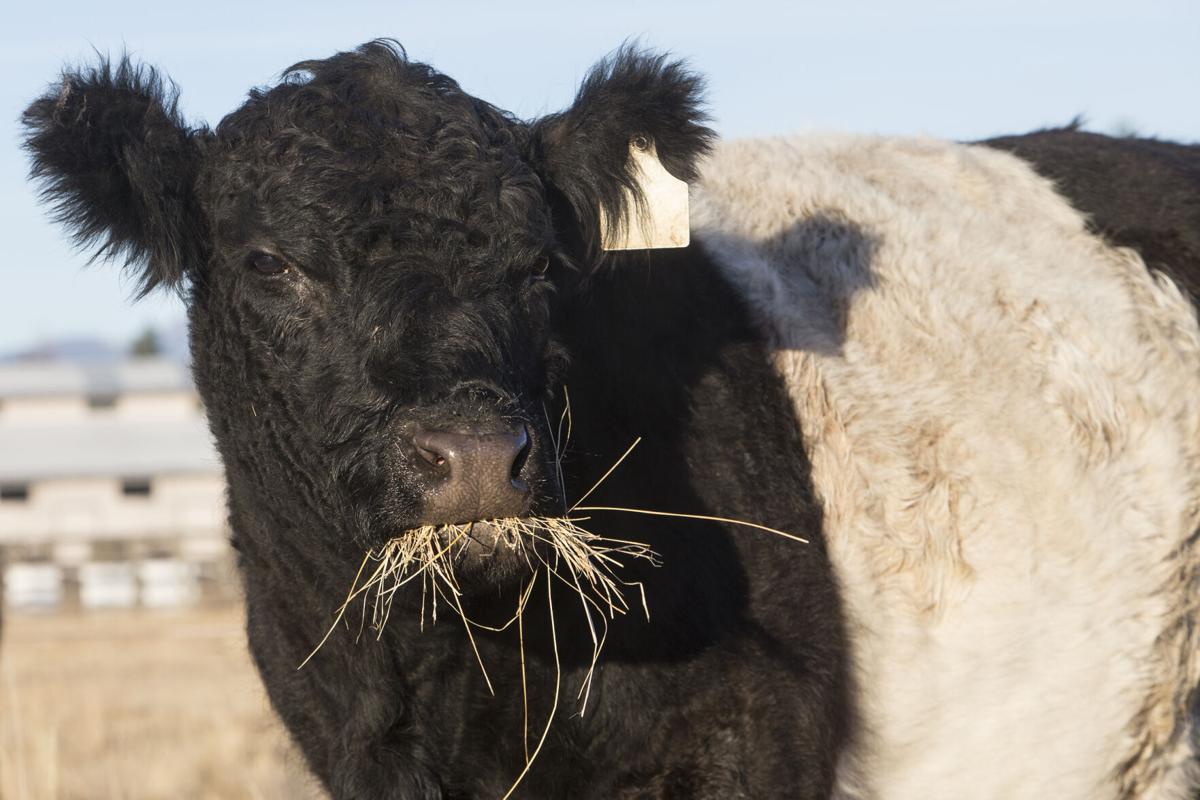 Cattle feed on grass in a field near Sisters on Friday, Oct. 23, 2020. Hobbs Magaret, owner of Sisters Cattle Co., has implemented regenerative grazing practices as a way to build healthier soils and plant diversity while producing locally raised beef for his customers.

Cattle feed on grass in a field near Sisters on Friday, Oct. 23, 2020. Hobbs Magaret, owner of Sisters Cattle Co., has implemented regenerative grazing practices as a way to build healthier soils and plant diversity while producing locally raised beef for his customers.

SISTERS — Three years ago, Hobbs Magaret was a 31-year-old vegetarian guitarist living in Southern California, trying to make a name for himself in the Los Angeles music scene. Then he watched a TED talk on regenerative farming — and his life changed in 22 minutes. Today, Magaret lives in Sisters, has his own regenerative ranching business — Sisters Cattle Co. — and has swapped the stage for open fields.

The path Magaret took to launch his own company actually began before that influential TED talk. It started in Amarillo, Texas, where he grew up, continued to Oregon where he spent his college years and early career, and included a stint in Southern California.

The journey taught him a thing or two about himself, and what he could do to help protect the environment.

Magaret is now committed to raising livestock as humanely as possible, doing it in a way that protects grasslands and uses fewer fossil fuels than traditional ranching. That’s a challenge in a world dominated by mass-produced beef operations, but Magaret is meeting it head-on using techniques borrowed from ancient and natural remedies that predate modern agriculture.

His methods, if they become mainstream, could help fight climate change.

“I wouldn’t be happy doing anything else,” said Magaret, while tending to his cattle on a field near the airport in Sisters. He drops an electric wire, hollers, and watches his cows mosey to another area of fresh grass.

“I was born into a ranching family. I have a skill set that very few people have. If I don’t develop this skill set and use every skill I have to help people, to help animals, help the ecology, then how can I sleep at night?”

The ranching family that Magaret was born into had spent over a century on the Texas panhandle. His grandfather, who managed ranches, advised him years ago that there is no retirement in ranching.

“I thought he meant if you ever want to stop working don’t be a rancher. Then I realized it’s an addictive lifestyle. Once you get bit you can’t be happy doing anything else. That is our curse.”

But Magaret did try to do something else. He went to the University of Oregon in 2005 to study political science and play guitar. He went back to Texas each summer to work on ranches but fully saw his career developing in music and composition.

After graduation, he made his way to Sisters, where his parents had retired. With musical influence from Stevie Ray Vaughan, Eminem, Jimi Hendrix, and the German composer Richard Strauss, Magaret formed a rock outfit (Hobbs the Band). The band played the Sisters Folk Festival, Bend Roots and other venues. Side projects included background music for video games and sports programs.

“Hobbs was not only an ace guitar player, but he was also a good brass player and a better than average singer. Even more than all that, he was an exceptional songwriter. All of that is what drew me to him as a producer,” said Jim Goodwin, another Sisters-based musician who worked with Magaret on various musical projects.

Goodwin said Magaret’s personal qualities were reflected in his songwriting.

“You can hear in the lyrics of Oregasm (the band’s album) that Hobbs was a somewhat angry, or critical, young man. He was intense, if nothing else,” said Goodwin.

The group practiced in a warehouse in Sisters and played live shows around the state. It was a living, and a fun one to boot, but life figured out a way to spin Magaret in another direction. When work started drying up in Sisters, Magaret took his young family to Los Angeles to pursue bigger dreams.

“We decided to go to LA, if you want to get serious (about music), you have to go into the bowels of the beast,” he said.

But LA proved challenging for the Magaret family. The Los Angeles suburb of Hawthorne, where the family moved to from Oregon, was vastly different for Magaret. He had grown up in the countryside and had a hard time adjusting to the City of Angels.

“I realized quickly that I did not have what it takes to become a composer in the L.A. scene,” Magaret said. “I did not have the disposition to live in the city.”

Magaret considered going back to ranching and started a nationwide job search. There were opportunities under consideration, but in the midst of his search, he stumbled on a TED Talk given by Allan Savory, an ecologist from Zimbabwe.

Savory gave a convincing argument that the best way to fight climate change and desertification of the planet is to increase the spread of regenerative grazing. This type of grazing entails grouping livestock close together, which helps regenerate the land better than animals that are grouped loosely.

“He discovered the predator-prey effect — that more animals, tightly bunched, moving faster, creates fertile grassland,” said Magaret. “When I saw that, everything came into crystal-clear focus, and I knew that there was no way I could ever do traditional ranching again.”

While some regenerative grazing was happening to an extent, Magaret realized that the number of people doing ultra-high density grazing in the United States numbered no more than a dozen. He wanted to join this small cohort of ranchers that is raising smaller sized cattle, using no fertilizer, and improving degraded pastures by keeping animals moving two to four times a day.

“For the second time in two years, we took a leap of faith and went all in to start the cattle company. And here we are. It has been working so far,” said Magaret.

Upon his return to Oregon, Magaret threw himself into ranching and left music behind. He was married now, and with a toddler, and looking to build a stable career. Goodwin, the producer, saw a change in Magaret after his return from Southern California.

“By the time he came back, he was much mellower,” said Goodwin. “He was committed to providing for his new family with a new vocation. He let the pretense of rock ’n’ roll fall away and replaced it with a downhome country attitude that was his experience growing up. He went back to his roots basically.”

The change in his world view also allowed Magaret to eat beef again, as long as it was raised using regenerative grazing, which he says is less stressful for the animal and better for the environment. He and his family now consume beef six times a week.

“It wasn’t until I discovered regenerative agriculture that I knew that I could eat meat because it’s contributing to the ecology and not extracting from it,” he said.

In addition to trying to make a profit from this business, Magaret is determined to spread the word about regenerative grazing, and the downsides of traditional feedlot-style ranching.

He has 85,000 followers on TikTok, where he shows his ranching techniques through short videos. One video, in which he explains the difference between on-farm slaughter vs. sending a cow to the slaughterhouse, has 1.1 million views.

“This is the most I can do to help,” said Magaret. “I can reach more people across the world making a 30-second video than (local politicians) can by spending $100,000 on political ads.”

His business is growing too. After starting with no cows and just $15,000 in seed money, Magaret now owns 28 butcher cows and manages around 50 mother cows. The Sisters Cattle Co. is not profitable yet, but it will be the number of cows increases to around 100.

And then there are the simple pleasures of working in open spaces. He pays his cows a visit several times a day, moving them from one paddock to another, so they can evenly chomp through the pasture, leaving their waste as they go, naturally fertilizing the land. The perks are less obvious than rocking out in front of a big crowd, but just as satisfying.

Regenerative grazing allows Magaret to make a difference.“I can provide families with really good food, and they know where it comes from,” he said. “And I can heal the land after thousands of years of us just taking, taking, taking. I have found so much more meaning and purpose by doing this.”

The work has allowed him to focus on tangible problems relating to ecology and agriculture, and attempt to correct them. He considers degraded land in Central Oregon a problem that he can help to fix.

While ranching has certainly given his life a new direction, it also shelved his career as a musician. Does he miss the limelight? Not at all.

“For a long time, I was just chasing happiness, I wanted to be happy, but it’s the wrong thing to be happy for,” he reflects. “With this (regenerative grazing), I have found meaning and purpose.”

What Magaret has not ruled out, is someday taking advantage of that political science degree he earned from the University of Oregon. Would the composer/rancher consider throwing his hat in the ring some November years from now?

“When it comes to sheer effectiveness about how to make the world a better place, I am doing the best I can with (ranching),” he said. “If that changes in the future, and I think I can make a difference by being in politics, maybe one day. Never say never.”