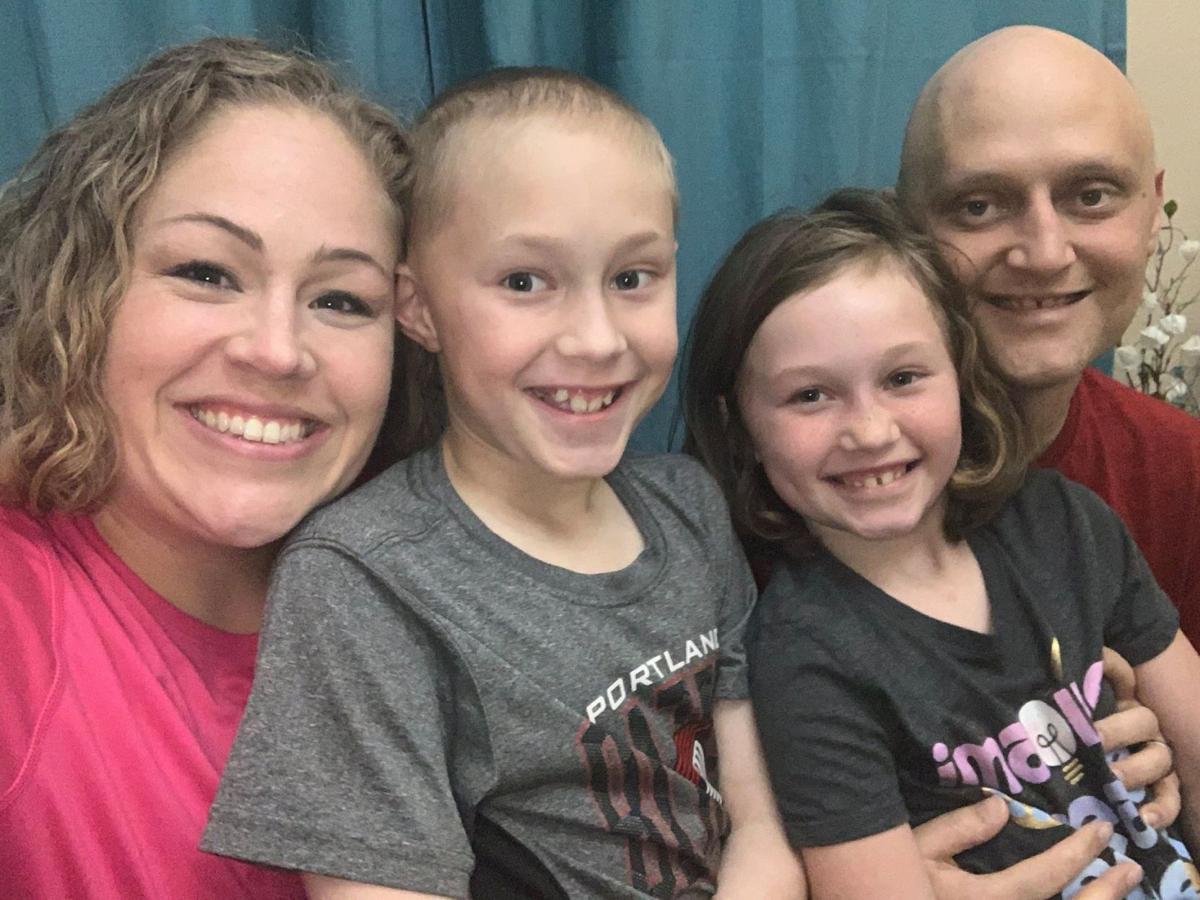 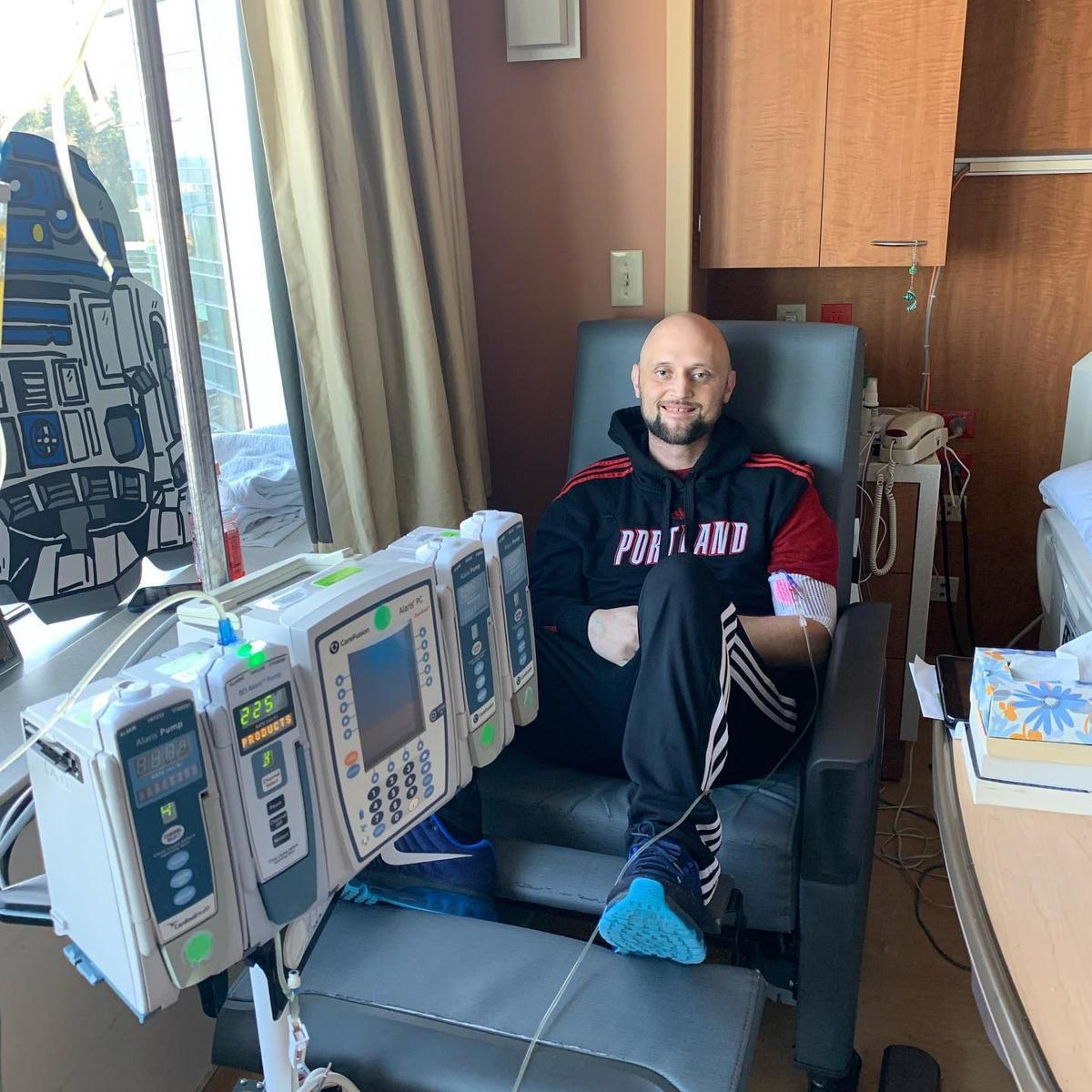 Aaron Brumbach, a teacher at Ridgeview High School, has been receiving treatments for leukemia at OHSU.

Aaron Brumbach, a teacher at Ridgeview High School, has been receiving treatments for leukemia at OHSU.

Adversity is something Aaron Brumbach is used to looking squarely in the face.

The 36-year-old Redmond native is a teacher at Ridgeview High School, in the newly developed credit recovery program. He helps struggling students gain the skills they need to succeed and meet their goals — whether those are to go to college or simply to believe they can graduate.

Brumbach sees himself in his students, having attended — but not graduated — Redmond High. He dropped out in 10th grade and got his GED, then worked as a carpenter for years.

He decided to enroll in Tillamook Community College in his late 20s, then married with a 9-month-old baby. Brumbach surprised himself by making a 4.0 GPA his first term — and went on to double major in history and English at the University of Oregon, followed by a master’s degree in education. A $90,000 Ford Family scholarship made that possible — even covering child care for their son, and a daughter who was born while he was in his undergraduate program.

Brumbach and his wife, Carrie, also a teacher, worked in the Fern Ridge school district before returning to Redmond, where they wanted to raise their kids near family.

“When you’re away from home there’s always that yearning to be back,” he said.

Carrie was the first to find a job in Central Oregon, a challenge when you are teaching specific subjects, she said.

She started working at Elton Gregory Middle School in 2017 and the family moved back to Redmond. Brumbach however continued working remotely for West Linn Tech, in their credit recovery program, until the 2019-20 school year when Ridgeview began offering the program.

He had been working there just six months when he drove himself to urgent care after school one day in late February, thinking he had “walking pneumonia.”

The urgent care clinic doctor told him it might be a heart attack and referred him to the ER at St. Charles Redmond, which ran bloodwork and then sent him to St. Charles Bend — by lifeflight.

The Bend hospital did more tests — which came back with leukemia.

They put him on another plane and less than 12 hours after he walked into urgent care, Brumbach was in the leukemia wing of OHSU.

He was finding a lot of success at Ridgeview, said Carrie. “It was kind of a shocker to have a normal day in the class and 12 hours later being told he can’t go back to work because of aggressive leukemia.”

What would be a challenge for anyone became even more so when mid-way through his first month of treatment, COVID-19 was declared a pandemic and OHSU sent Carrie home from the hospital due to visitation restrictions, and the kids were not able to see him for weeks.

A biopsy came back clear of cancer March 20, but just 13 days later another biopsy showed it had returned — aggressively.

He received a second induction of “a really strong treatment,” again in isolation. “Luckily, my wife Facetimed me a lot, kept me in contact with the family, as close to home as I could be,” said Brumbach.

There are hard days — then and now — but he tries to keep a good attitude and maintain some kind of normalcy.

“The good news is my spirits are still really high,” he said. “I think cancer can take a lot from you. So I think it’s important to hold on to the things that make you you. I’m a high-energy person that likes to enjoy life. My humor and things like that are things I’ve held on to. I won’t let cancer take that from me.”

“Aaron refused to stay in his bed at the hospital,” said Carrie, because “at home your bed is for sleeping in.” He also insisted on wearing his own clothes.

“In the morning he would get up and sit on the couch or recliner and go for walks — a mile or two a day.”

Brumbach said the mindset of “keeping your humanity,” and not “just laying there” has always been a big thing for him. “I kind of associate that with giving up or dying,” he said. “That’s where people die — in hospital beds. I’m lucky that I’m younger and can do that. Not everybody gets to do that, especially older patients who are just not capable of fighting in the same way.”

Brumbach also made a point to get to know every doctor and nurse treating him — so that even in quarantine, he would always have a friend.

“He’s trying to make the most of the experience that he can and still have human connection when he’s in isolation,” said Carrie. “He’s a pretty incredible dude.”

The support of the community has been an important factor in keeping up the family’s spirits.

From a car parade of their colleagues after Brumbach’s first hospital stay, to dropped off meals, cards, gifts, prayers, well wishes and even a Dutch Bros fundraiser — which Brumbach said was the idea of some of his students who work there — the community has shown its support.

The cards were a huge encouragement, said Brumbach, especially those that came when it all started — “the scariest point because it was so fresh.”

As teachers, Brumbach and his wife are “trying to help pave the way for a better future,” in a community they care about.

“I was born here and the community means a lot to me,” said Brumbach. “To have it respond the way it has is a encouraging and humbling experience.”

“We weren’t originally going to do a GoFundMe account because maybe there are more people who are in more dire straits than us,” said Carrie, “and we didn’t feel comfortable asking our community — people reached out asking where their donations could go because they were going to donate anyway.”

Insurance is covering the treatment — with an out-of-pocket requirement that they met the first day at St. Charles, said Carrie.

“The GoFundMe money and the Dutch Bros fundraiser have been really helpful in covering that,” along with a $100,000 bill for the two life flights in February. The family has since signed up for both of the lifeflight memberships available in the area, said Carrie, and the original bill is being negotiated.

“We’ve had to seek out other means to cover his income — Social Security, disability,” said Carrie. “We are hopeful that he will be able to return to the classroom to do what he loves and be able to provide an income.”

Brumbach is on extended leave during his treatment, and he may not be able to go back to work in the same way because of being immunocompromised, said Carrie.

After the two intensive rounds of chemotherapy, the cancer is in remission, but Brumbach will have to undergo a bone marrow transplant to reach full recovery.

Brumbach has three genetic mutations which make him “a cancer factory,” he said, and the bone marrow transplant is supposed to act as a reset button — but his body has to be ready for the transplant, which doctors have told them he has a 60 percent chance of surviving.

The chemotherapy damaged his lungs “pretty significantly,” said Carrie, so he has been trying to recover strength in his lungs.

“If my lungs aren’t as strong as they need to be, they can’t do an aggressive transplant, that could change the type of treatment — trying to manage the leukemia rather than try to cure it,” said Brumbach.

Additionally, Brumbach found out he did have a heart attack on Feb. 25 when he went to urgent care, which caused some damage to his heart.

“The heart attack was due to my low blood counts — there wasn’t enough blood running through my body to run my heart properly,” he said.

Brumbach has had to get blood transfusions a couple of times a month since beginning treatment. “Without people donating blood, I wouldn’t be alive,” he said.

Nurses encouraged him to ask people to give blood, anticipating a shortage “because of COVID.”

“They let your counts get low before they give you blood because there is such a high demand for it, compared to what they receive,” he said. “We’ve had people show support by donating blood because that’s something that doesn’t cost anything.”

Brumbach will have to stay within 15 miles of OHSU for three months following the bone marrow transplant, which is planned for mid-July.

“He’ll be able to come back here after those 100 days, which is pretty standard,” said Carrie. “There’s a lot you have to go through — immunosuppressants, you have to make sure the transplant takes in your body.”

Thanks to the donations they have received they will be renting a house in Portland for that time. The house is rented out by a couple who lost their son in a bone marrow transplant and now offer the house for others who need the treatment.

Carrie will be taking a short leave of absence to be with Brumbach in Portland, though she still will not be allowed to stay with him in the hospital.

The good news is that donated bone marrow is ready for the transplant.

His sister was the last of three siblings to be tested as a bone marrow donor — and hearing that she is a 100 percent match was “a really uplifting moment in a brutal time,” he said.

Brumbach is set to be admitted to OHSU July 7 to prepare for the transplant.

“It’s getting to the point now where they have to do the transplant even if I’m not fully prepared,” he said. “The goal isn’t to kill me, it’s to help me have the longest life I can.”

“That’s one of the hardest parts. My biggest fear is that they can’t do the transplant that is the cure and it puts my teaching career in jeopardy, that’s the biggest part of who I am.”

Brumbach doesn’t plan on it being the final chapter.

“That’s why it’s so important to do what we do have control over — our mindset, attitudes, raising our kids, planning for our future even though it’s uncertain, do everything in our power to beat this, to keep moving,” he said.

“Aaron’s story is pretty incredible and he’s worked hard to get here,” said Carrie. Everything her husband has accomplished makes her believe this can’t be where his story stops.

The school district is also betting on his success, Carrie said.

“They want him back teaching,” she said. “He has a gift for it. They’ve been allowing him time.”

"I think cancer can take a lot from you. So I think it's important to hold on to the things that make you you. I'm a high-energy person that likes to enjoy life. My humor and things like that are things I've held on to. I won't let cancer take that from me."