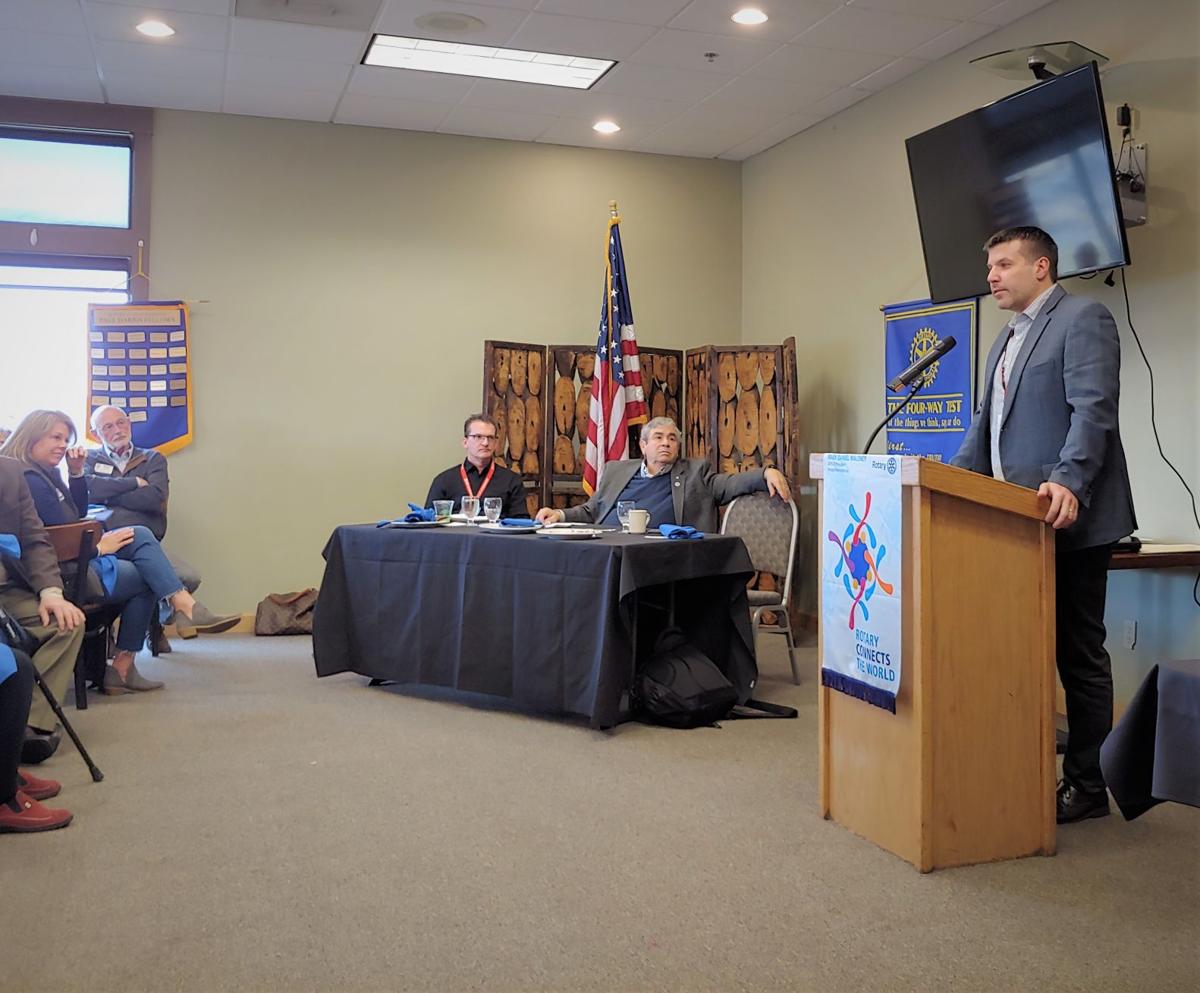 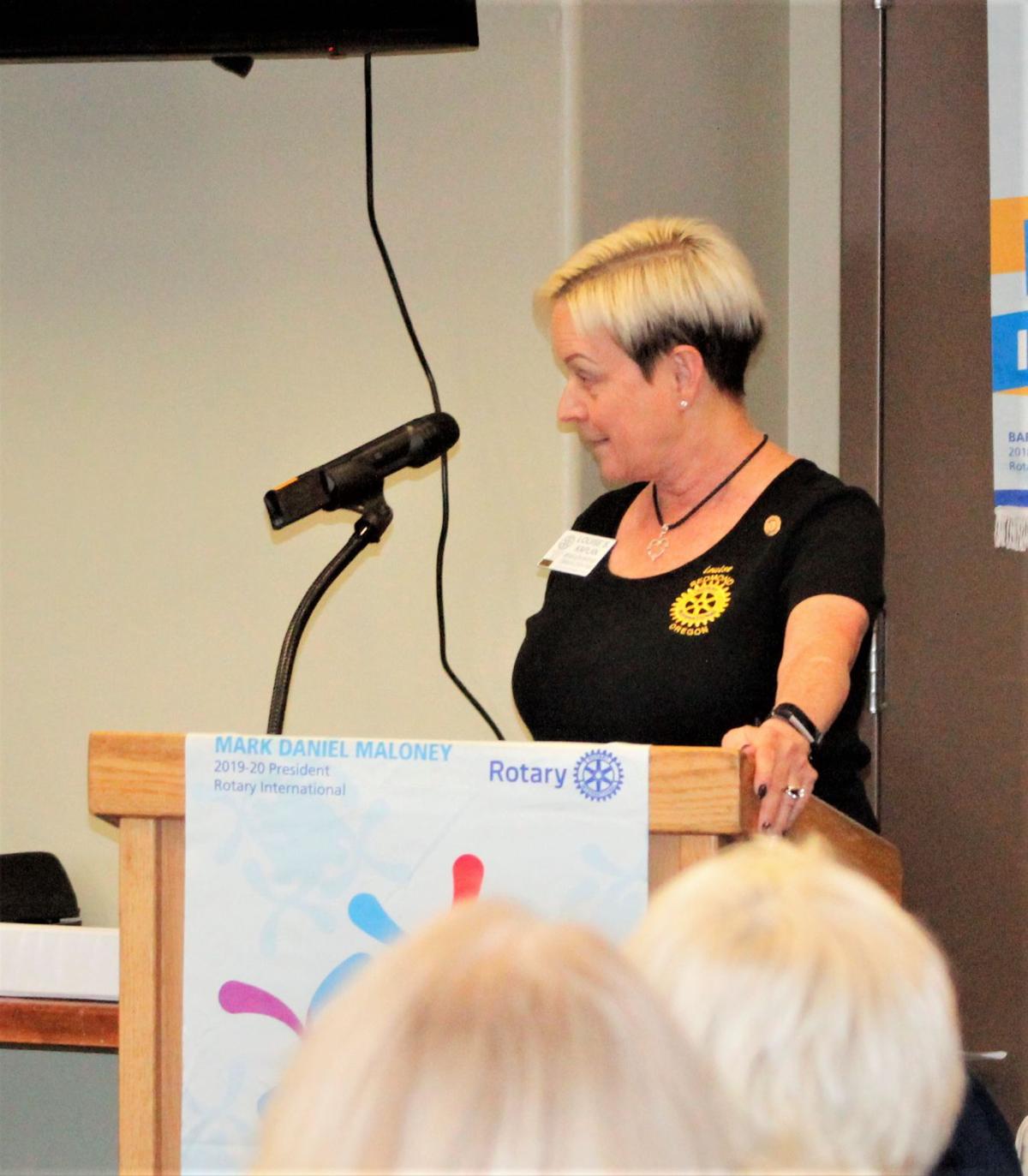 Louise Kaplan with the Rotary Club of Redmond introduces the speakers at the group’s Jan. 23 meeting. 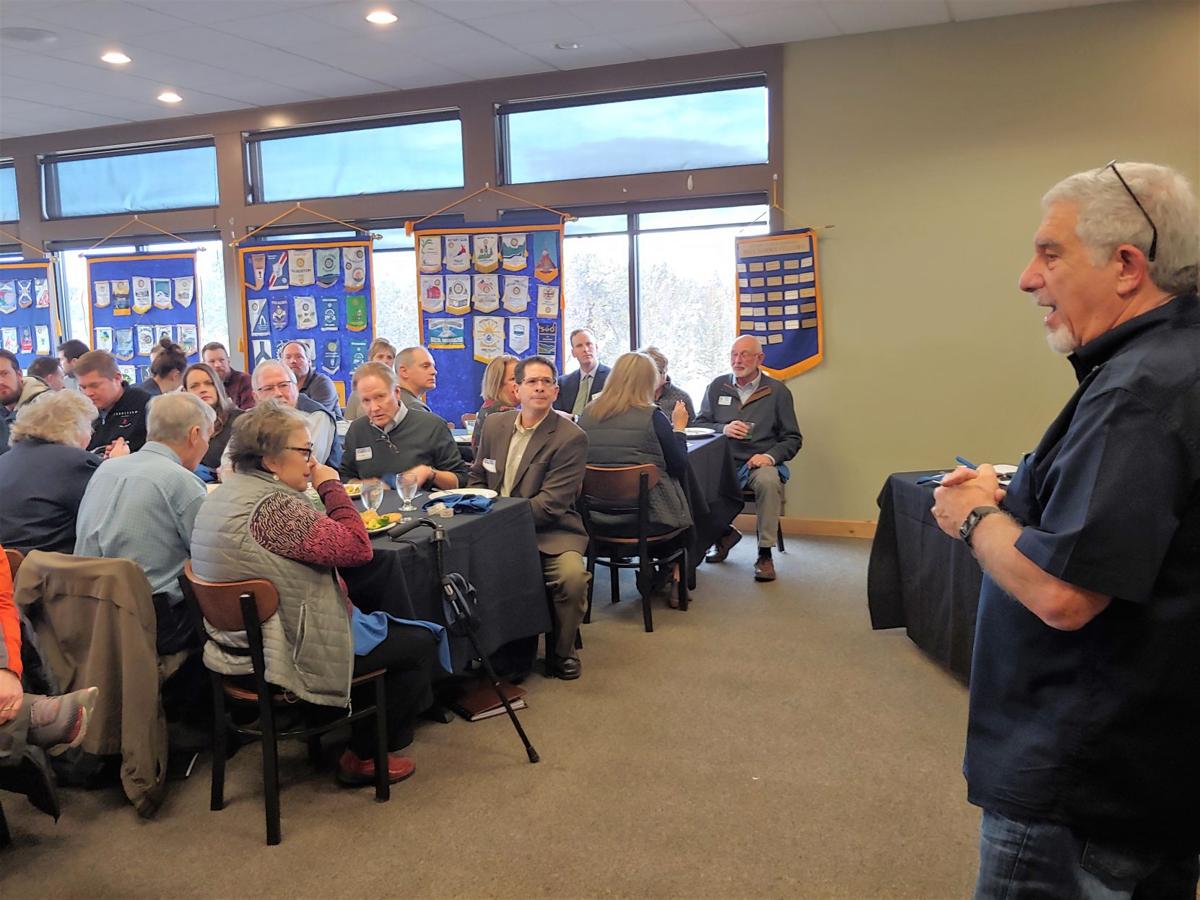 Louise Kaplan with the Rotary Club of Redmond introduces the speakers at the group’s Jan. 23 meeting.

Discussion of growth and future expansion at Redmond Municipal Airport highlighted a presentation by Redmond officials.

The airport had 1 million passengers in 2019, or 100 % growth over five years, officials said. That number that is expected to increase this year because of additional Alaska Airlines flights to San Diego, Los Angeles and San Francisco. The fourth busiest airport in the state, RDM is in position to pass Eugene, which had around 1.1 million passengers, and Medford, which had around 1.05 million.

“With the additional Alaska flights, we’re expected to get that 1.1 million this year, or close to it,” airport director Zachary Bass told a Jan. 23 Rotary Club of Redmond luncheon, where Mayor George Endicott and Chuck Arnold, economic development and urban renewal director for the city, also spoke. “So within the next two years, we’re hoping that instead of No. 4, we’re No. 2 (behind only Portland).”

Delta Air Lines is expected to add additional flights to Seattle and Salt Lake City onto the ones it has during 2020, Bass said. A seasonal United Airlines flight to Chicago will also return from June through November.

“As you hear me talk right now, Delta and Alaska are in a battle over Seattle space,” he said. “I won’t get into all that, but it’s good for us. You’re seeing those price drops, competition is good.”

Bass said 82 % of Central Oregon airline passengers now fly out of Redmond, instead of driving to Portland or another city.

The airport, which has 350 employees, most of them working for private companies, added two spots for commercial planes to park over the summer, and Bass said they are already full. That means 11 planes stay in Redmond overnight.

A new 500-space parking lot and car rental maintenance facility are also going in, Bass said. The car rental facility will take 100,000 cars that are getting gas and being washed out of city traffic each year, while cutting the time it takes to get a car ready for another customer in half.

The next big airport project is to rehabilitate its taxiway over the next four-to-five years, which will wrap up paving projects that have also included runways, Bass said. After that, projects more noticeable to the public will start.

Among those is a terminal expansion, which is expected to break ground in the next three years, Bass said. The project is expected to cost $40 million, on top of a $42 million expansion a decade ago.

“We do not know what it looks like yet, we’re going to do a terminal area plan over the next eight months,” he said.

The $300,000 study will show officials the best way to phase the project, as well as how financially feasible it is, Bass said.

“The extension of the runway will open up everything — Mexico, even Hawaii,” Bass said. “We had Hawaiian Airlines come and talk to us…the problem was we knew our runway was only 7,000 feet long. They said, thanks, they’ll get back to us when it’s longer.”

The runway extension is expected to be another $40 million project, and will need additional federal approval, Bass said.

Bass added that the airport gets no money from the city, and all money it gets comes from the Federal Aviation Administration or user fees the airport charges.

One disappointment for the airport area came when discussions of a new hotel at the fairgrounds fell through after two years of discussion, Arnold said. The city does have two new hotels going in near the intersection South Highway 97 and Yew Avenue and a few more around Canal Boulevard near the North Highway 97 interchange.

A beam and all-around victory for Hu, Porter springs first place on vault

During the question and answer session, Endicott responded to a question about what the city is doing to prevent St. Charles Health System from taking future actions like last year’s closure of the birthing center at its Redmond hospital. Endicott said the issue was discussed at a recent meeting, and it’s possible that a lawsuit could be filed to attempt to force the hospital system to honor the contract that was signed when Central Oregon District Hospital and St. Charles merged in 2001.

“They are, as you say, pretty dismissive,” Endicott said. “They claim that they changed their board model from geographic representation to more of a functional model. For example, right now, they have people on there from Chicago and from Portland. We’re not happy about that, we continue to work on ‘em.”

After The Spokesman asked St. Charles if it has any board members from Redmond, the health system responded with this emailed statement from board Chairman Jamie Orlikoff:

“The St. Charles Health System Board of Directors is comprised of experts in a variety of areas including physicians, lawyers, compliance specialists, financial professionals and more. We recruit and select new board members based on the expertise needed on the board through a regular, annual review cycle. The board is not considered a ‘representative board.’ This means that we expect all board members to think of the good of the health system as a whole when making decisions, and not to represent a particular geographic area.”

St. Charles announced recently that Bend resident J. Corey Schmid of Seven Peaks Ventures and Dr. John Terhes, a general surgeon in Eugene, had been named to its 12-member board. St. Charles also announced Orlikoff, president of a Chicago-based consulting firm, had been named board chairman. Redmond is not mentioned in any of the board members’ online bios.

Among the recent city accomplishments Endicott touted in his speech was annexing 960 acres near the Deschutes County fairgrounds for large lot industrial. He said the state has agreed to put $2.1 million in infrastructure in the area, which still needs to be rezoned.

“We want to see some big dogs come in here and build some factories,” Endicott said of the property, which will contain 50-to-200-acre parcels.

Endicott also encouraged the audience to attend a Feb. 6 meeting on the city’s 2040 comprehensive plan, which will help guide the city’s growth over the next two decades, when Redmond is projected to grow to 50,000 people.

“It’s important for you to engage, because we need to know where you want Redmond to go,” Endicott said. “And if we don’t know that, we’re guessing. We want you at the meetings to help us plan the future of our community.”

Endicott also said he will be running for a seventh two-year term as mayor in the November election.

Arnold said the urban renewal department achieved its No. 1 goal last year, which was to get the former New Redmond Hotel reopened. That happened in December when guests checked into the hotel, now called the SCP Redmond after Southern California-based owner Soul Community Planet.

A large chunk of the project’s $12 million construction cost came from public loans. But Arnold said that is expected to come back in $3 million of economic impact from the hotel in its first year.

“The community had a vision years ago that we need to do this, we’re not going to open it back up as offices or apartments,” Arnold said. “We understand the catalytic nature of getting guests downtown, feet on the street.”

Downtown saw 19 new businesses arrive in 2019, and Arnold said many of them came because they wanted to be there when the 49-room hotel reopened after being closed since 2004. He looks to double the number of new businesses this year.

Dealing with parking is another issue facing downtown. Arnold said the city plans to build a new 40-space paved public lot on what’s now gravel at the corner of SW Evergreen Avenue and SW Fourth Street, across from Just Cut Juice Bar. The free lot will also have electric vehicle charging stations.

That’s in addition to the new parking spaces that will be created by tearing down the former City Hall building. The city had looked at placing a mixed use development in the space but was unsuccessful in finding a developer to partner with. Some have called for the building, which opened as a Safeway store, to be saved.

“If anybody has questions about that, I’d be happy to take you on a tour of the inside of that building, as long as they provide you with a facemask,” Arnold said.

Arnold hopes the market will eventually get to where a developer of the site can be found.