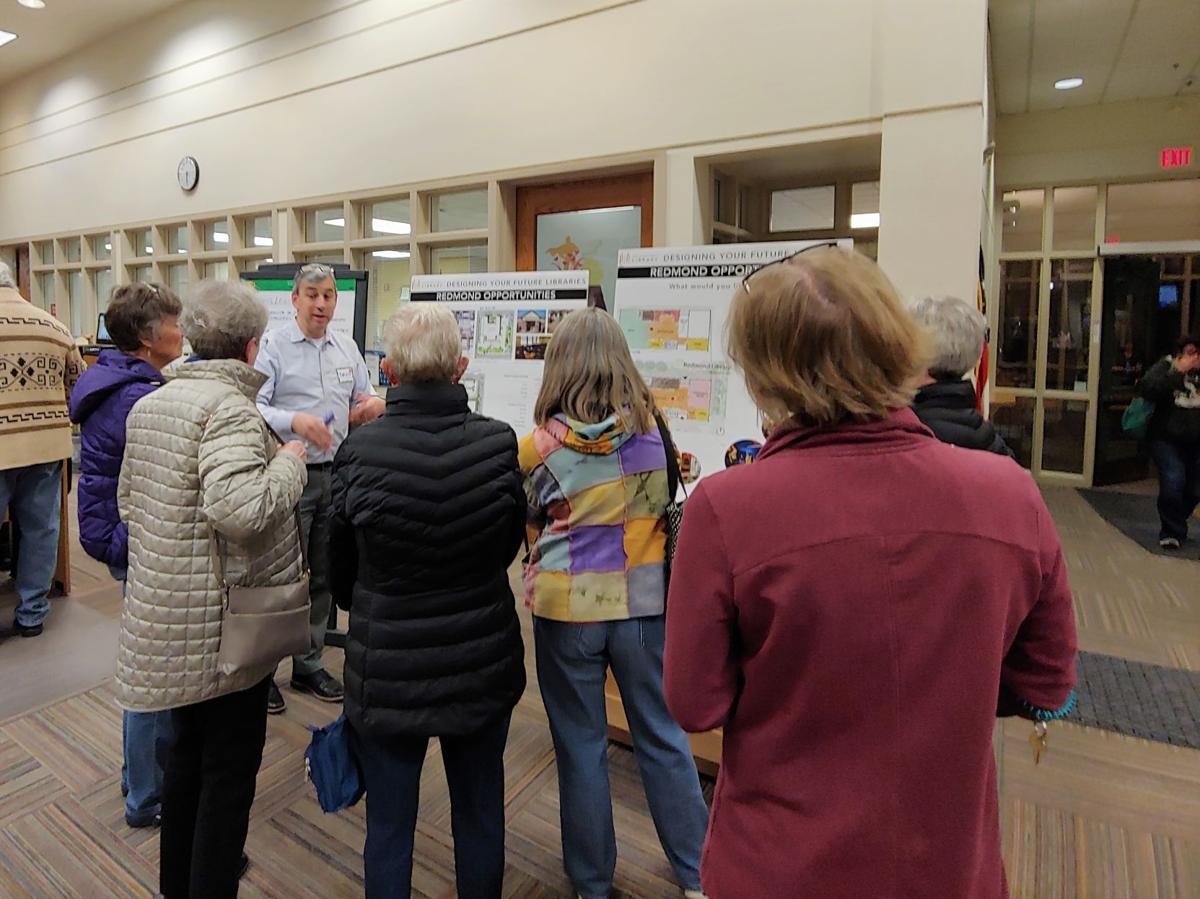 Library users line up to hear information about possible upgrades to the Redmond Library at a Nov. 7 meeting. (Geoff Folsom/Spokesman photo) 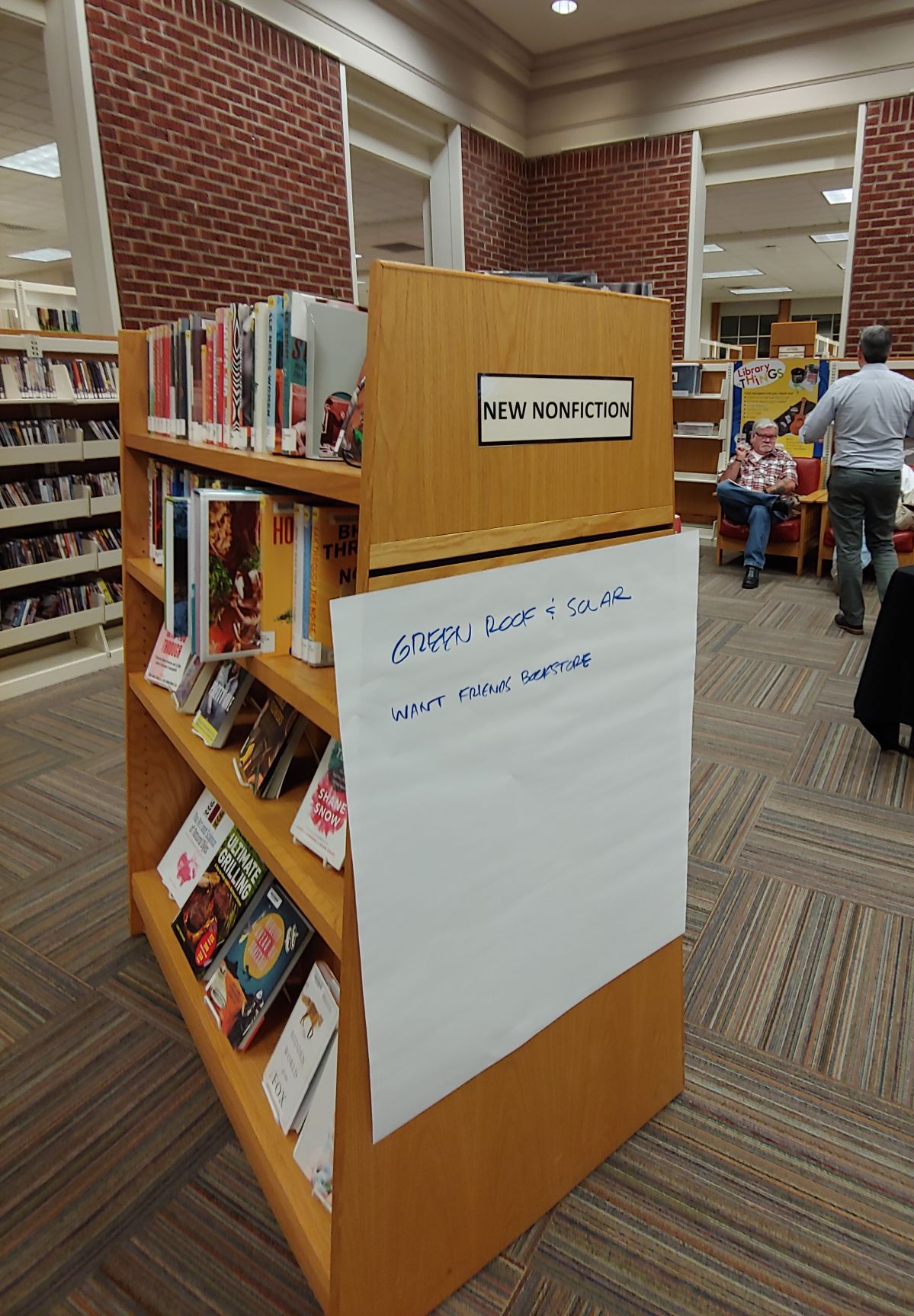 Attendees were asked to share ideas about the future of the Redmond Library on paper at a Nov. 7 meeting. Some were upset about the possible moving out of the Friends Bookstore. (Geoff Folsom/Spokesman photo)

Library users line up to hear information about possible upgrades to the Redmond Library at a Nov. 7 meeting. (Geoff Folsom/Spokesman photo)

Attendees were asked to share ideas about the future of the Redmond Library on paper at a Nov. 7 meeting. Some were upset about the possible moving out of the Friends Bookstore. (Geoff Folsom/Spokesman photo)

Attendees at a Nov. 7 public meeting on the future of the Redmond Library had ideas for what they want — and what they don’t — in an expanded facility.

One idea that didn’t go down well with some is the removal of the Friends Bookshop from the library — a move that could happen well before the current library is expanded or replaced. The store is operated by the volunteer Friends of the Redmond Library group, which raises money to be used in the library and donates 13 boxes of books per week to other nonprofits.

Deschutes Public Library Director Todd Dunkelberg said at the meeting that the library in the historic Jessie Hill Elementary School building was designed in the 1990s for a city of 12,000 people. And it needs more space even before opening a new or expanded facility, which could double the size of the 21,200 square-foot library.

“Even if the project goes through, it will be a number of years before we do something, and we are very short of space right now,” he said.

Roz Gamer, president of the Redmond Friends group, said before the group’s Nov. 8 annual meeting that the fundraising groups at other system libraries are also being told to take their book sales off-site. She said the library system recommended all the individual friends groups disband and form a single group because it costs too much for library officials to attend all the groups’ meetings.

That idea was a nonstarter, at least with Redmond, where the Friends group has been involved since before the branch was a part of the Deschutes system. Gamer said that while other groups have struggled getting board members and volunteers, the Redmond Friends number of volunteers have tripled to 26 in the last two years and book sales are up.

The Friends group and the library system have been at odds before. According to Spokesman archives, Deschutes Public Library threatened to sue the Redmond Friends in 2015 in an attempt to force the Friends to honor a memorandum of understanding that donations would be made directly to the Deschutes Public Library Foundation. The Friends wanted money it raised to stay in Redmond, rather than be at risk of going to libraries in Bend or other parts of the county.

The Redmond Friends group was also able to maintain its 1,000-square-foot space in the library, after the library considered reducing it to 80 square feet in 2016.

The memorandum of understanding between Deschutes Public Library and the Redmond Friends allows the library to tell the bookshop to leave with as little as 30 days notice, Gamer said. While official notice hadn’t been given yet, Gamer said she hopes they will be allowed to stay at least through January.

“We understand this is library property, and we truly feel blessed we’ve had this space as long as we’ve had it,” she said. “This is a lot of change for a group that has served the community this long.”

In its 47 years, the Friends group has raised more than $250,000 for the Redmond Library, Gamer said. That’s helped pay for an early learning center in the library, buy books for the entire Deschutes Public Library system and put on programs like Summer Reading and Novel Idea, the Friends group said. The Redmond Friends have 262 members, including board members, volunteers and art committee members, who display and sell work in the bookshop.

While it might seem odd to tell a fundraising group to leave just before a major capital campaign for the library system, Gamer said they’ve been told the Friends aren’t cost effective.

The cost for the new Redmond Library hasn’t been determined, but consultants told the library district last year that a high end estimate was around $31 million. According to The Bulletin, Deschutes Public Library paid $448,000 to San Francisco Bay Area-based Group 4 Architecture to create conceptual designs of all its upcoming projects.

Among the options the Redmond Friends are looking at is buying a “book bus,” that goes to different locations for book sales, Gamer said. They would also be interested in doing something like the Friends of the Bend Libraries did when their inventory was destroyed by damage at Deschutes Public Library administration building, where the books were stored. The Bend Friends moved their sales to an unused modular building at an elementary school. Other options include a room at a church or another existing building.

The Redmond Friends are hoping for help from the community not only in finding a new location that’s as good or better than the existing one, but also for help with moving and storing inventory, Gamer said. Anyone interested in helping can contact Gamer at 951-283-8242 or roz_gamer@yahoo.com.

Others at the meeting on library expansion were concerned about other features of the new library. Many placed hearts on poster boards to show what they think should be a priority. Among the proposals that proved popular were an expanded children’s area, more reading space and a gathering space, possibly with a coffee shop.

One set of plans architects displayed showed a two-story library, one with an addition built behind the current building, located at 827 SW Deschutes Ave., just off the new section of Centennial Park. Another showed an all-new building with a larger parking area.

Plans showed a large children’s area on the first floor of the new library, with an adult area upstairs. Each floor had a “marketplace” area in the middle.

Get to know the Wisconsin Badgers' 2020 basketball scholarship recruits

Mary Meier of Redmond said she loves the existing library, saying it should be kept and any changes should not be too drastic, avoiding trends like an open floor plan.

“This is so beautiful, I hate to have it wasted,” she said. “I really love this place.”

Tim Kirkman, who attended fourth grade at the brick building that’s now the library, wants to see something that will be beneficial to his small children.

“I look to have more children’s areas,” he said. “That would be more engaging for them.”

Kirkman does have a sentimental attachment to the old building, he said.

“I’d like to keep the old school building looking like it was, but I also don’t want to stand in the way of progress,” he said.

The meeting was the first in a series in the library system, with the others in December and January in Bend, La Pine, Sisters and Sunriver. The library system is planning replacements or upgrades for all its facilities, including a new 95,000-115,000 square-foot facility in Bend.

Architects will gather information received at the meetings and other public engagement and present it to the library system’s board at a March 11 meeting, Dunkelberg said.

“A big part of that is narrowing it down to how much it will cost,” he said. “How much money do we need to make this happen?”

Then they will go about finding the money. Dunkelberg said the library system will seek grants and donations, but will likely also need to go out for a bond election.

Friends of the Redmond Library: www.redmondfol.org