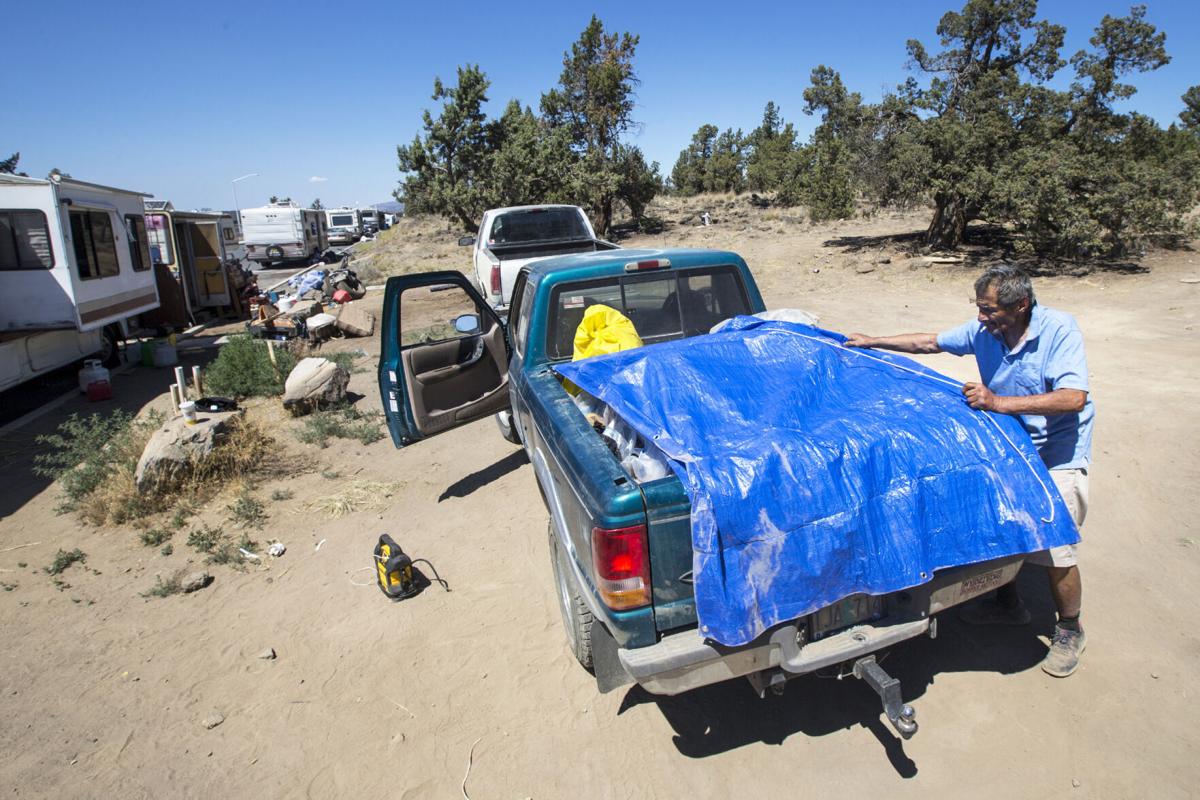 Guy Cavallo, 69, works on securing a tarp over a load of trash July 8 in preparation to drive to the dump from his campsite along 17th Street in Redmond 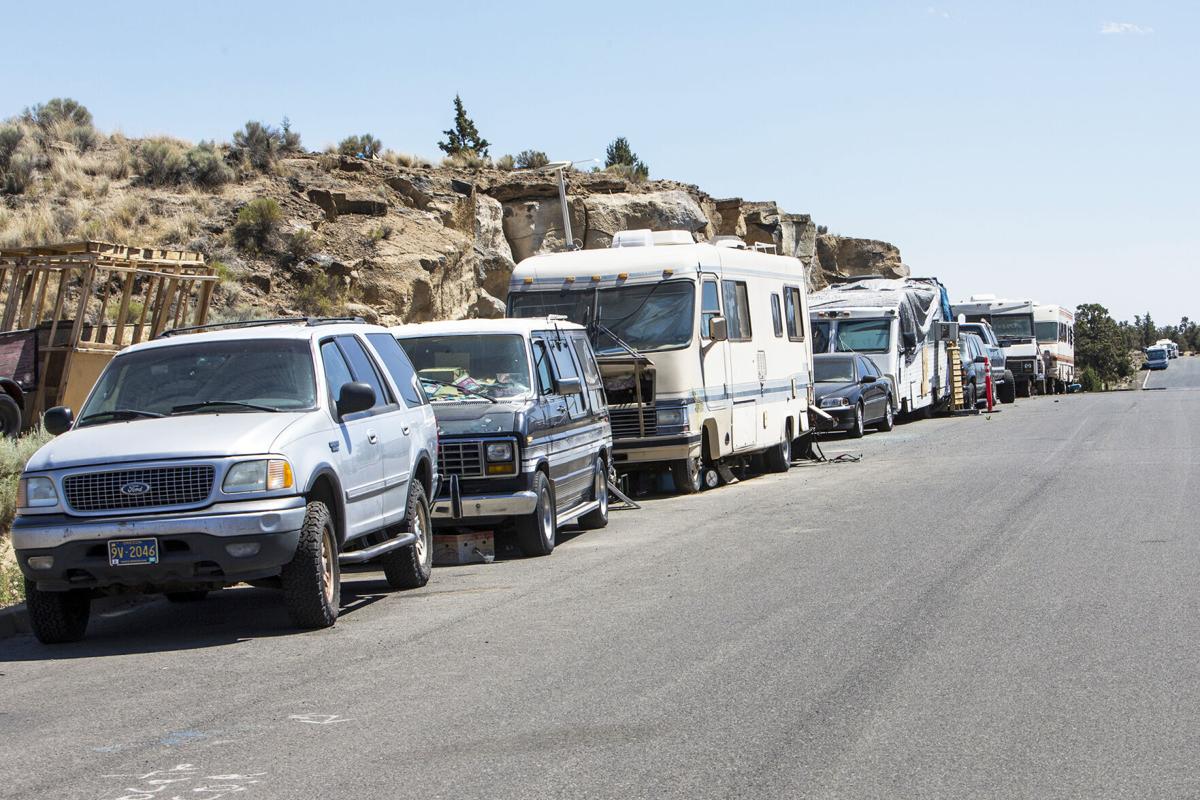 Campers line a section of 17th Street in Redmond. 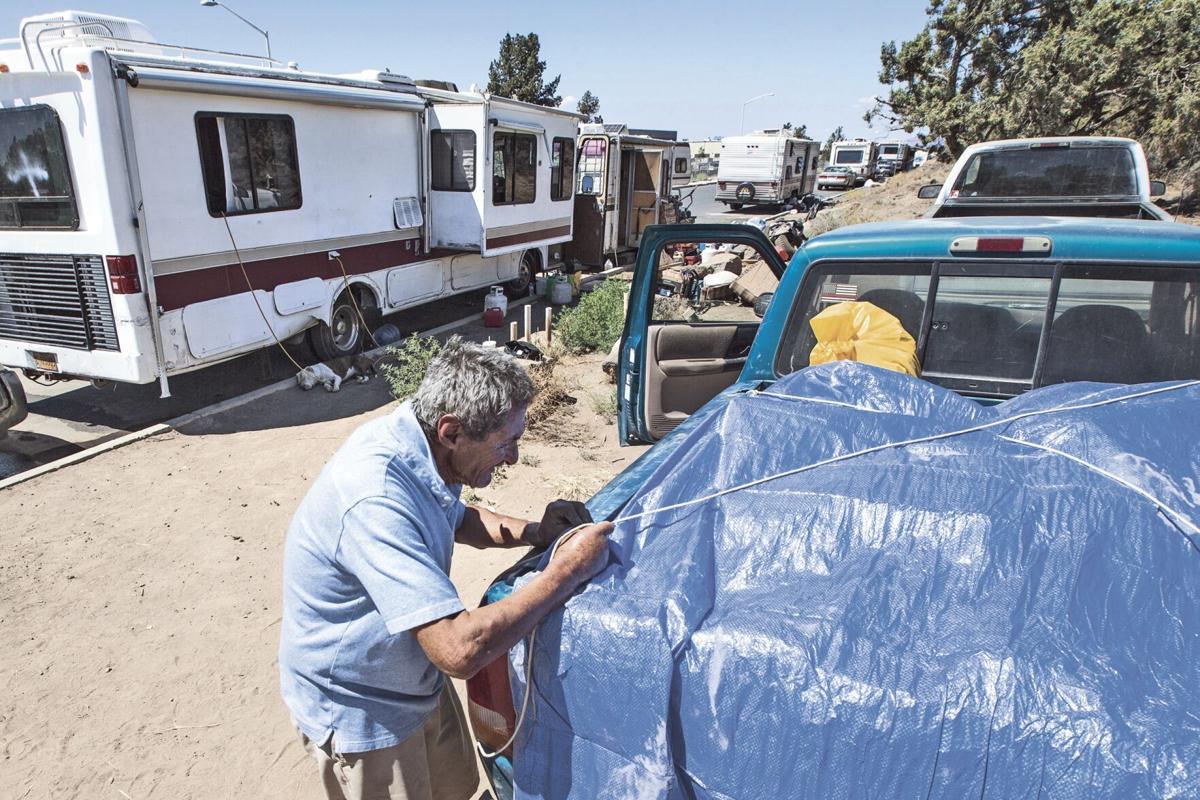 Guy Cavallo, 69, works on securing a tarp over a load of trash in preparation to drive to the dump from his campsite along 17th Street in Redmond on Thursday, July 8, 2021. 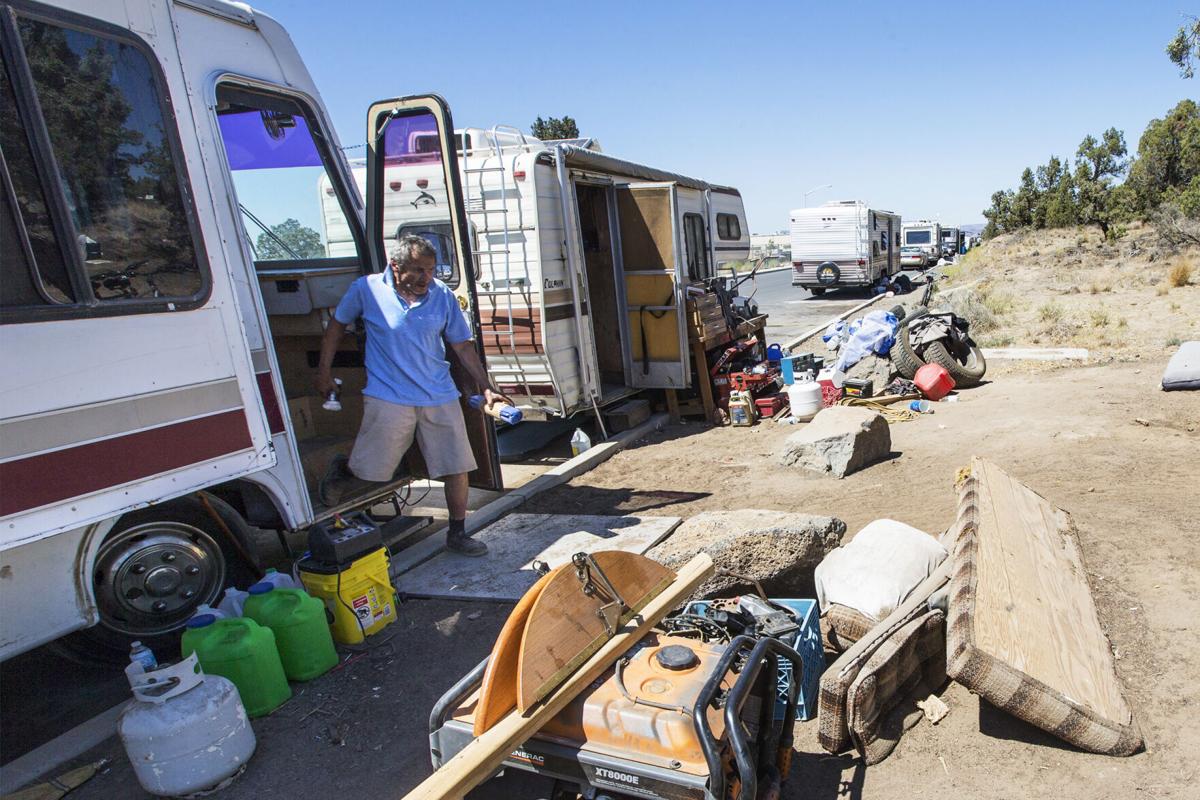 Guy Cavallo, 69, works on securing a tarp over a load of trash July 8 in preparation to drive to the dump from his campsite along 17th Street in Redmond

Campers line a section of 17th Street in Redmond.

Guy Cavallo, 69, works on securing a tarp over a load of trash in preparation to drive to the dump from his campsite along 17th Street in Redmond on Thursday, July 8, 2021.

Guy Cavallo has a simple request: a place he can call his own.

For the past 10 years, the 69-year-old has been homeless, finding new places to put his RV around Redmond every few years. Most recently, he joined dozens of other homeless residents in calling the corner of 17th Street and Greenwood Avenue in Redmond home.

Getting to live in a house or apartment again would of course be his preference — he lost his former Redmond house when his wife died, he said.

But his income of $820 from Social Security makes that basically impossible to do.

“It’s so hard to get going again,” Cavallo said. ”With the price of everything, what do you do?”

So for Cavallo, even having a parking space where he knew he could legally park would make a world of difference in his life.

A program that could offer this is now being considered in Redmond.

On July 21, the Redmond City Council and Deschutes County Commission will meet to discuss several proposals in an effort to address the city’s growing homeless population.

The city is also set to receive two new homeless shelters in the near future after having no long-term options for years.

Redmond received $5.8 million in American Rescue Plan COVID-19 relief funding from the federal government, which can be used for homeless-related projects, according to the city manager.

While homelessness is not a new issue in Redmond, the amount of attention it is currently garnering is, said James Cook, a Redmond-based board member of Central Oregon’s Homeless Leadership Coalition.

“I think actually getting things before the council is a unique step, something that hasn’t really happened before,” Cook said.

The push to find tangible solutions to address the growing number of people living on Redmond’s streets and public lands came after the city heard multiple complaints from businesses near 17th Street and Greenwood Avenue, where many homeless people currently camp in Redmond. The city heard reports of people wandering onto manufacturing floors uninvited, which is unsafe, said Redmond City Manager Keith Witcosky.These issues were raised at another joint meeting between the county and city in May, where Redmond City Councilor Jon Bullock and Deschutes County Commissioner Phil Chang decided to team up to find ways the two public bodies could contribute to a long-term solution, Witcosky said.

Several ideas are currently on the table, according to Chang and advocates for the homeless. One idea on the table is a safe parking program, which would let a church or business offer a parking lot as a safe place for people to park their vehicles or RVs long term. Rick Russell, a pastor at Mountainview Fellowship Church who is behind the proposal, said he has seen similar programs in places like Salem. He hopes the City Council will approve the idea and contribute $25,000 to pay for a position to manage the program.

Another idea that will be discussed is a managed camp, said Chang.

“We need these places where homeless people are allowed to be,” Chang said.

There is currently a proposal to find city or county land to build a tiny-home community, which would be known as Oasis Village. The proposal, supported in part by the nonprofit Jericho Road, would be similar to Bend Hero Foundation’s Veteran’s Village, which is set to open by September, according to the foundation’s Executive Director Erik Tobiason.

The vision is to start with about 10 tiny homes, with communal showering, eating and laundry spaces. It would be a low-barrier shelter, meaning someone wouldn’t have to be sober to qualify, and people could live there between six months to two years.

Don Senecal with Jericho Road said the village would be monitored 24 hours a day and provide services to help people transition out of chronic homelessness.

“We want to get them to the point where they can transition into a place like (Bethlehem Inn) or Shepherd’s House,” Senecal said.

To make it happen, the group behind Oasis Village needs land and consistent funding, Senecal said. The group is looking for the county or city to consider donating 2 to 5 acres of land somewhere in or near the city, so people can be close to services.

“The problem is after you open the door and you start getting clientele we have to pay for people to be there, you have to pay utility bills … that to me is a much larger challenge,” Senecal said.

The virtual meeting between Redmond and Deschutes County leaders is at 5 p.m. Jul 21 online at redmondoregon.gov.