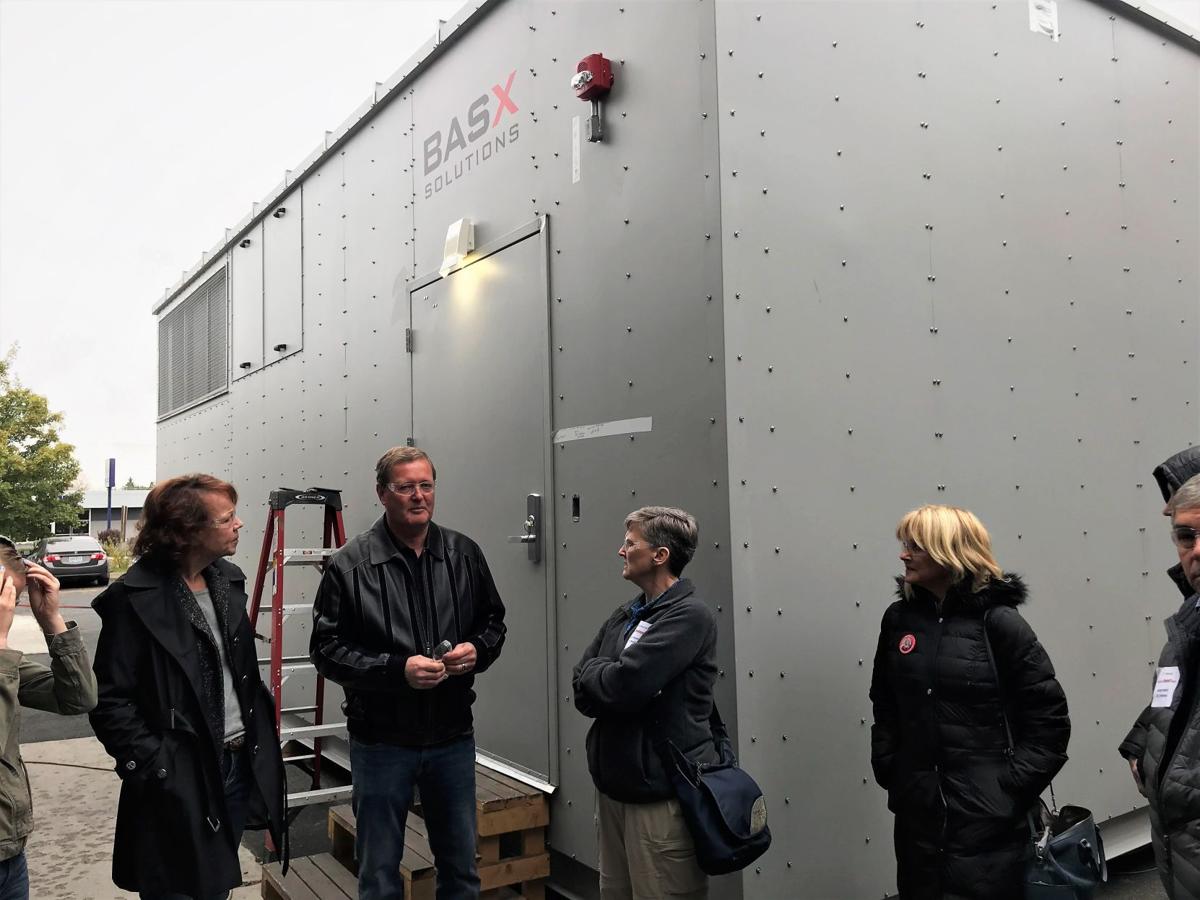 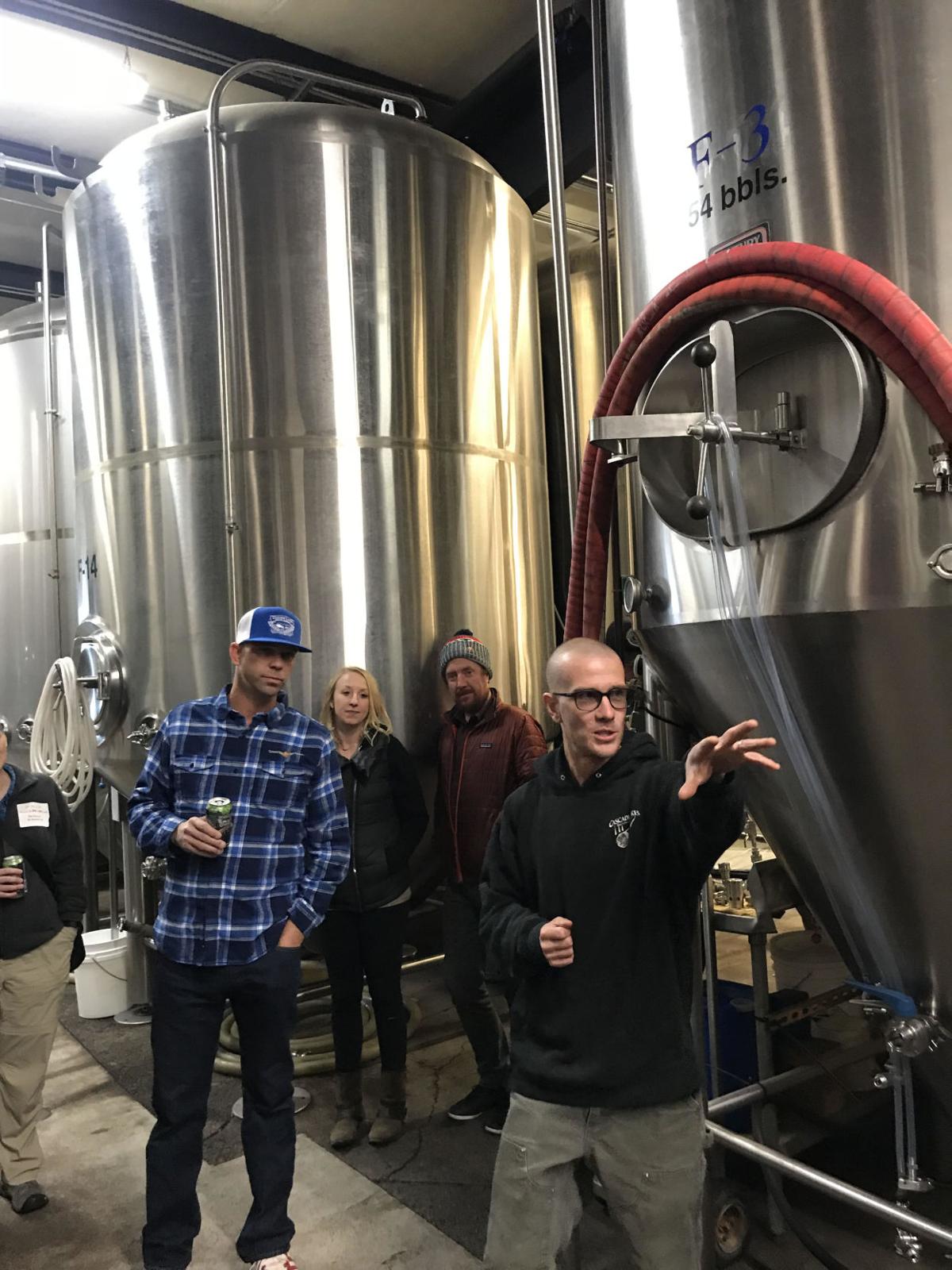 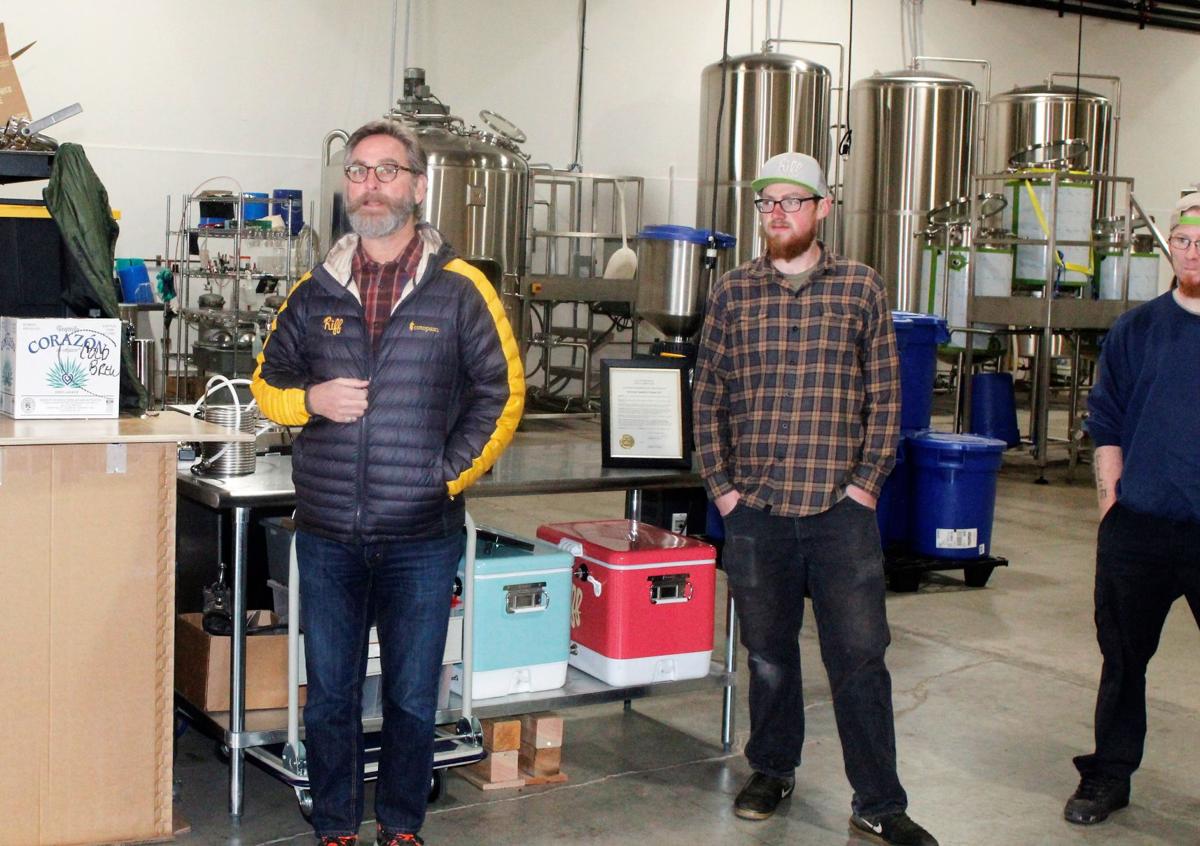 Riff co-founder Paul Evers speaks to attendees on the Oct. 5 Made in Redmond tour at the cold-brew coffee company’s new production facility. 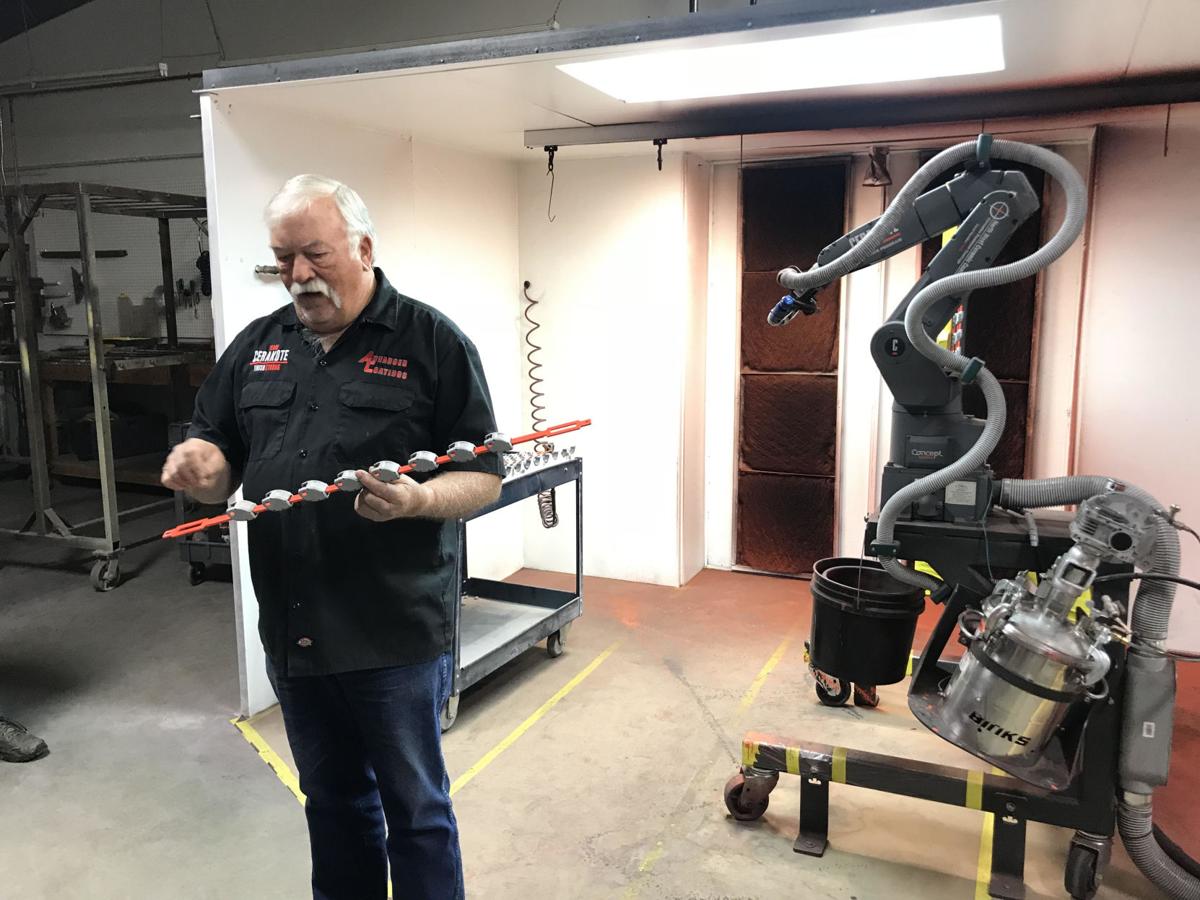 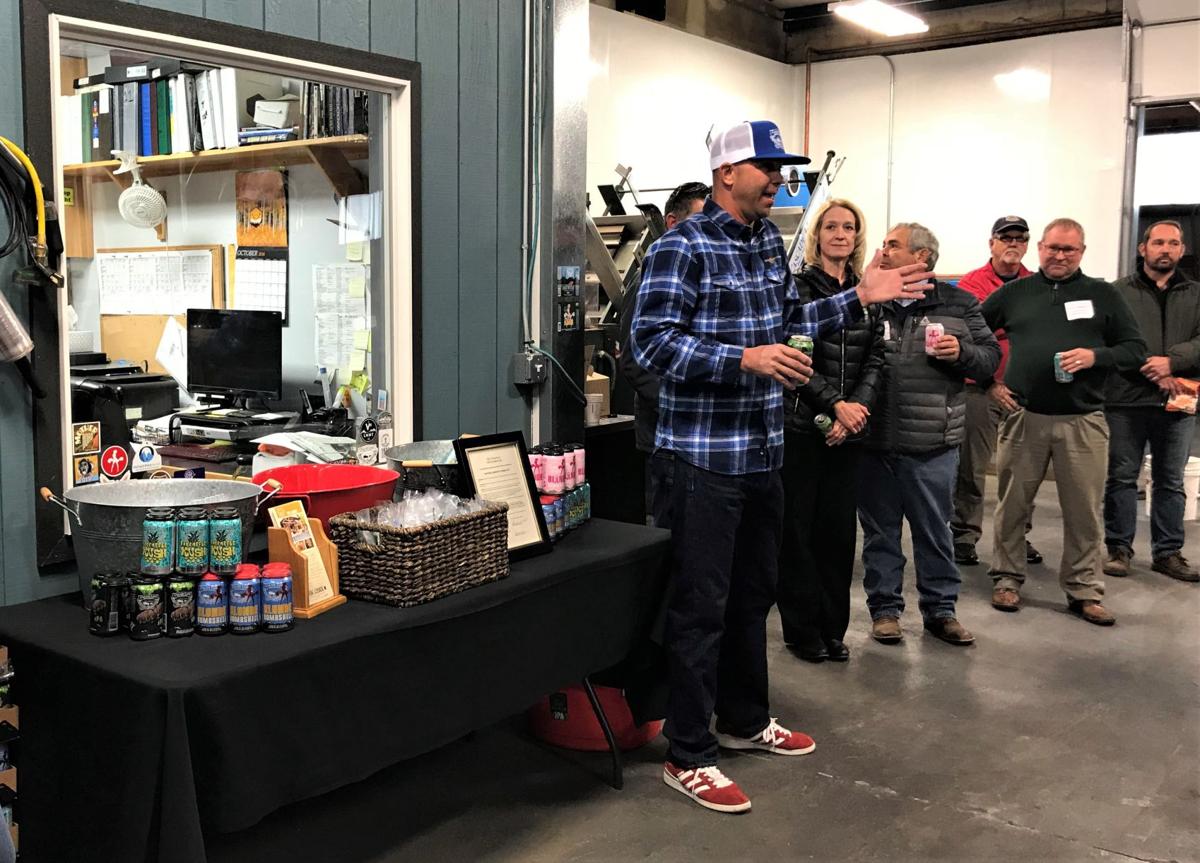 Cascade Lakes president Chris Justema speaks to attendees on the Oct. 5 Made in Redmond tour. He announced a new investment in the brewery. (Geoff Folsom/Spokesman photo) 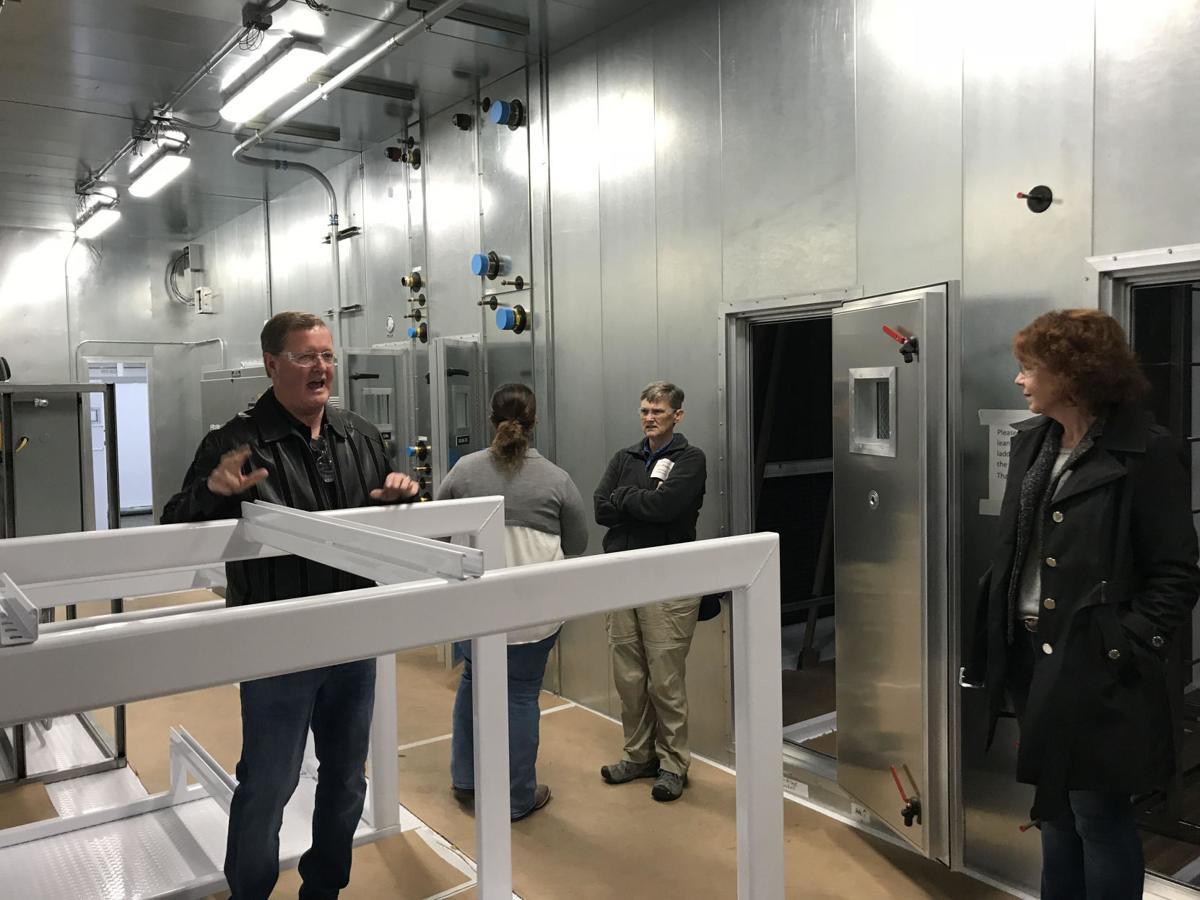 BasX Solutions CEO Dave Benson shows one of the company's under constuction modules to customers on the Oct. 5 Made in Redmond tour. (Geoff Folsom/Spokesman photo) 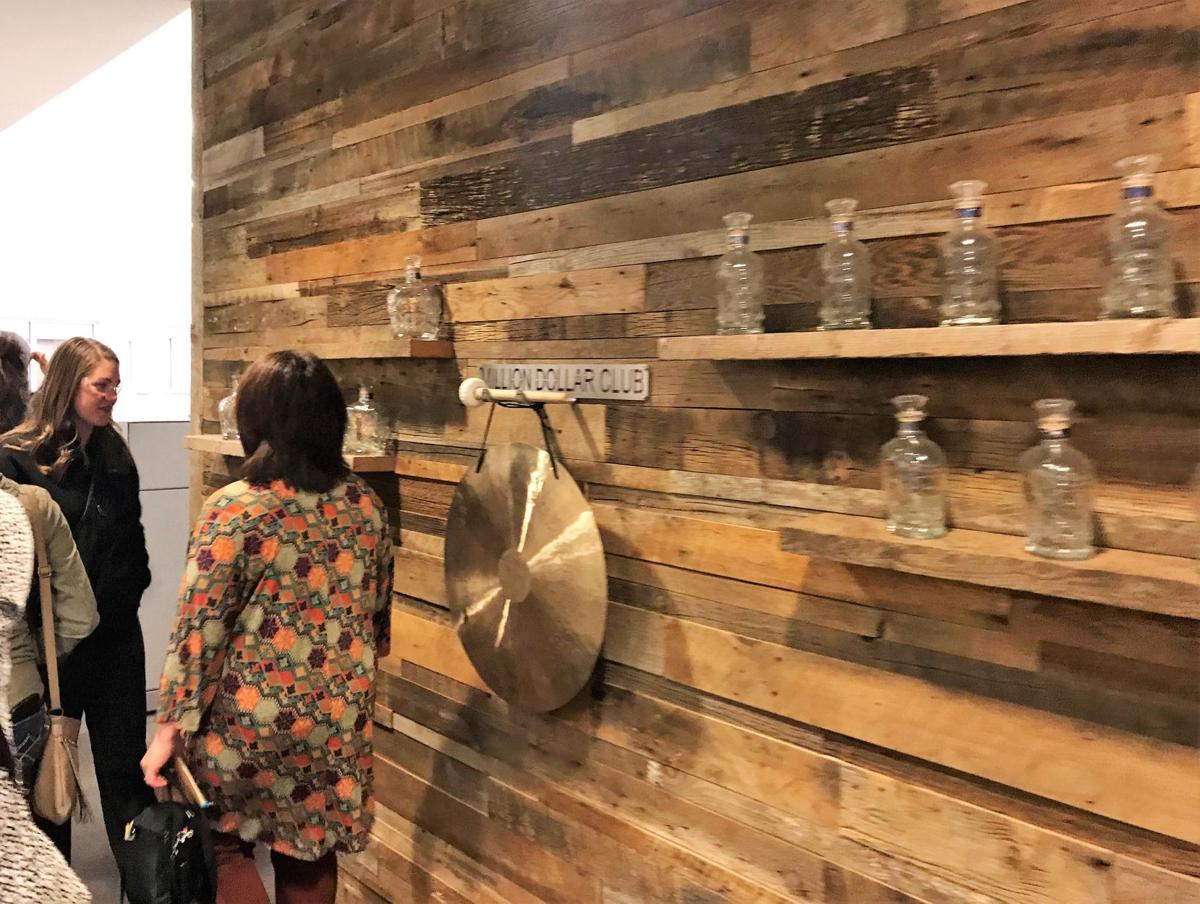 Attendees on the Oct. 5 Made in Redmond tour pass the “million dollar” wall at BasX Solutions. Employees bang the gong to celebrate each time they add a million-dollar account.

Riff co-founder Paul Evers speaks to attendees on the Oct. 5 Made in Redmond tour at the cold-brew coffee company’s new production facility.

Cascade Lakes president Chris Justema speaks to attendees on the Oct. 5 Made in Redmond tour. He announced a new investment in the brewery. (Geoff Folsom/Spokesman photo)

BasX Solutions CEO Dave Benson shows one of the company's under constuction modules to customers on the Oct. 5 Made in Redmond tour. (Geoff Folsom/Spokesman photo)

Attendees on the Oct. 5 Made in Redmond tour pass the “million dollar” wall at BasX Solutions. Employees bang the gong to celebrate each time they add a million-dollar account.

A group of 68 people, ranging from the mayor to students, took a bus tour of four Redmond industrial businesses as part of the recent Made in Redmond tour.

The attendees of the sixth annual tour learned about big deals like an agreement for BasX Solutions to build data centers for a large cell phone tower company and a possible expansion of Cascade Lakes Brewery. While they are still growing, the smaller HD Hydrographics and Riff coffee had unique stories, as well.

One Redmond company is gearing up for a potentially massive project.

BasX Solutions, which builds cooling systems for data centers, has an agreement with Crown Castle, the country’s largest owner of cellular towers, more than 40,000, said BasX CEO and cofounder Dave Benson. BasX is already working on the modular data centers at its facility in the former Walmart store near the Deschutes County fairgrounds.

The new data centers are being placed at cell towers because companies are switching to 5G technology.

While BasX might not get to build the data centers for all the Crown Castle’s towers, Benson said it will be a big deal for BasX with only a fraction of the sites.

BasX now employs 150 people, but that could be growing substantially as it works on the cell tower project, Benson said.

Among the other companies BasX is building cooling systems for are Intel and LAM Research, a semiconductor processor company.

BasX’s products can be used for everything from controlling odors coming from medical marijuana processing facilities to cooling missile silos, Benson said.

BasX bought the 103,000 square-foot former Walmart in 2013. The building is now abuzz with workers who work on fans and modules of various sizes.

Along with more employees, Benson said BasX is planning an additional building in its current parking lot.

Cascade Lakes Brewery handed out a variety of its beers by the can to attendees on the Oct. 5 tour.

With word that the brewery was getting new investors, the owners were clearly in a celebratory mood.

Chris Justema, Cascade Lakes president and one of its partners, said the brewery signed a deal a day earlier to receive $3-to-5 million in investment money from a Redmond-area father and son. That means the company, which opened 24 years ago as an early tenant of the Redmond industrial park near the airport, will be able to build a new state-of-the-art facility.

“We are going to grow our business in Redmond, Oregon, for the next 10 years,” Justema said. “We get to grow old together. We’re super excited.”

With eight craft breweries either open or under construction in Redmond, and at least 20 more in Bend and elsewhere in Central Oregon, Cascade Lakes has been able to distinguish itself, Justema said. The recent introduction of its “Pineapple Kush” beer, a blend of three hops and a splash of pineapple, gave a boost to all its products.

Cascade Lakes has also seen sales of canned beer take off. Justema said that within six months of introducing the colorful aluminum cans, they accounted for 78 percent of the company’s sales. The money the company saves on using cans, instead of bottles, allows it to handle things like minimum wage and property tax increases.

“It’s a gamble, and it’s paying off,” Justema said.

The beer is now available only in Oregon, Alaska, Idaho, Washington and Northern California. Instead of rapid expansion, Justema said it is focused on filling in the “Swiss cheese” of underserved areas in those states.

Matt LaFleur: ‘There was never a doubt’ about keeping Mike Pettine as Packers’ defensive coordinator

After rough 2019, Husker kicker Pickering has competition on his hands

“We need to spend more time in Umatilla and try to fill in every orifice,” he said.

Cascade Lakes has 85 employees between the brewery, its 7th Street Brew House near the Redmond Fred Meyer and The Lodge in Bend, Justema said. It makes 16 varieties of beer at a time.

Cascade Lakes works well with the other breweries to make Central Oregon the “Napa Valley of Beer,” Justema said. Though he added any brewer that makes a bad beer will be kicked out of the group.

When asked, Justema was skeptical about the possibilities of Cascade Lakes making marijuana infused or non-alcoholic beers — the former because of the potential inability for people to handle the combined product and the latter because it doesn’t contain alcohol.

“We’re not going to be on the cutting edge of doing anything too edgy,” he said.

Some joked that Redmondites can not only finish the day with beer made in The Hub, they can start it with coffee produced here. The newest of the tour’s businesses to Redmond is Riff, a cold-brewed coffee company that brews on SW Veterans Way in Redmond.

In fact, one of five cofounders of Riff said the company is correlating cold-brew coffee with the craft beer market. The company makes brews coffee and packages it in bottles and boxes and plans to open a taproom next month in the Box Factory area near Bend’s Old Mill district.

The company started packaging its coffee in Redmond in March and has deals with distributors to sell its coffee in Central Oregon, the Portland area and Idaho, said cofounder Paul Evers.

Riff enjoyed the process of working with Redmond, Evers said.

“One of the reasons we’re excited about Redmond is we got a building permit in two-and-a-half weeks, whereas in Bend it might have been two-and-a-half years,” Evers said, perhaps exaggerating slightly.

Brewing coffee with cold water allows for a less acidic and bitter taste, lessening the need to add cream and sugar, Evers said.

Riff has 15 employees, but that will soon expand to 45 with the opening of the bend coffee shop, he said. The company also has a “Tap Shack” in Eugene that is staffed by University of Oregon graduate students.

HD Hydrographics, which takes up less than 10,000 square feet and has six employees in a couple bays in an east Redmond industrial park, might be the smallest of the four companies visited on the Made in Redmond tour, but the process it uses was no less fascinating.

The company puts faux finishes on a variety of items, from rifles to motorcycle helmets. It uses a process where a film pattern is placed in water and molded to fit them item with thousands of possible designs.

The company’s second bay features a $100,000 Cerakote robot, which precisely paints 48 bicycles locks at a time with a corrosion-resistant finish, said Gene Hoskin, who started the company in 2010. While the locks are the only thing HD Hydrographics currently uses the robot to paint, they are used elsewhere to finish Oakley sunglasses and Leatherman hand tools.

HD Hydrographics has plans to open in a new 11,000-square-foot facility near the Pacific Pride gas station off NE Hemlock Avenue, Hoskin said.

The event wrapped with lunch at COCC’s Redmond Technology Center. Jerry Schulz told the group that the college had applied for state matching money to help pay for a new $16 million building on the campus.