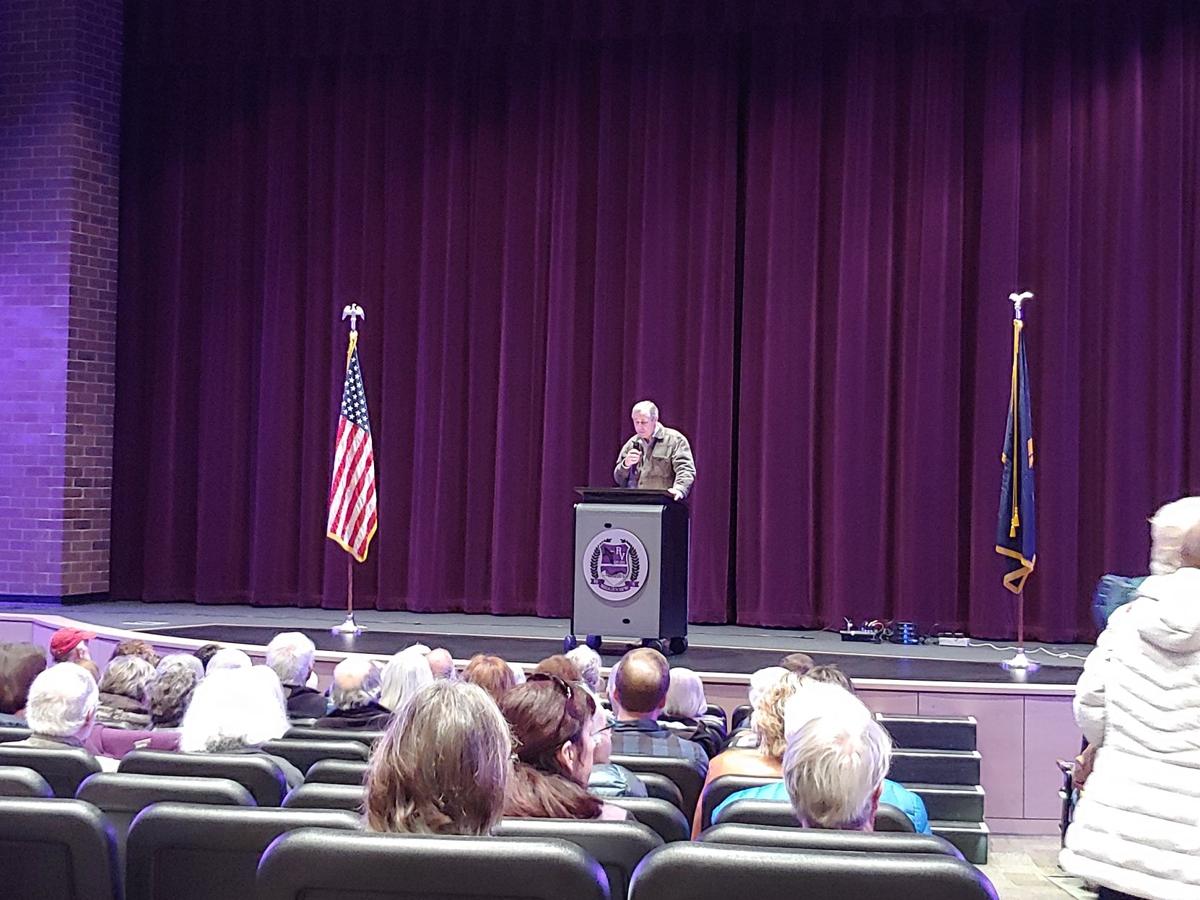 Sen. Jeff Merkley, D-Oregon, speaks during his Jan. 4 town hall meeting at Ridgeview High. Merkley addressed Iran, climate change and impeachment at the event, which was his seventh town hall so far this year. 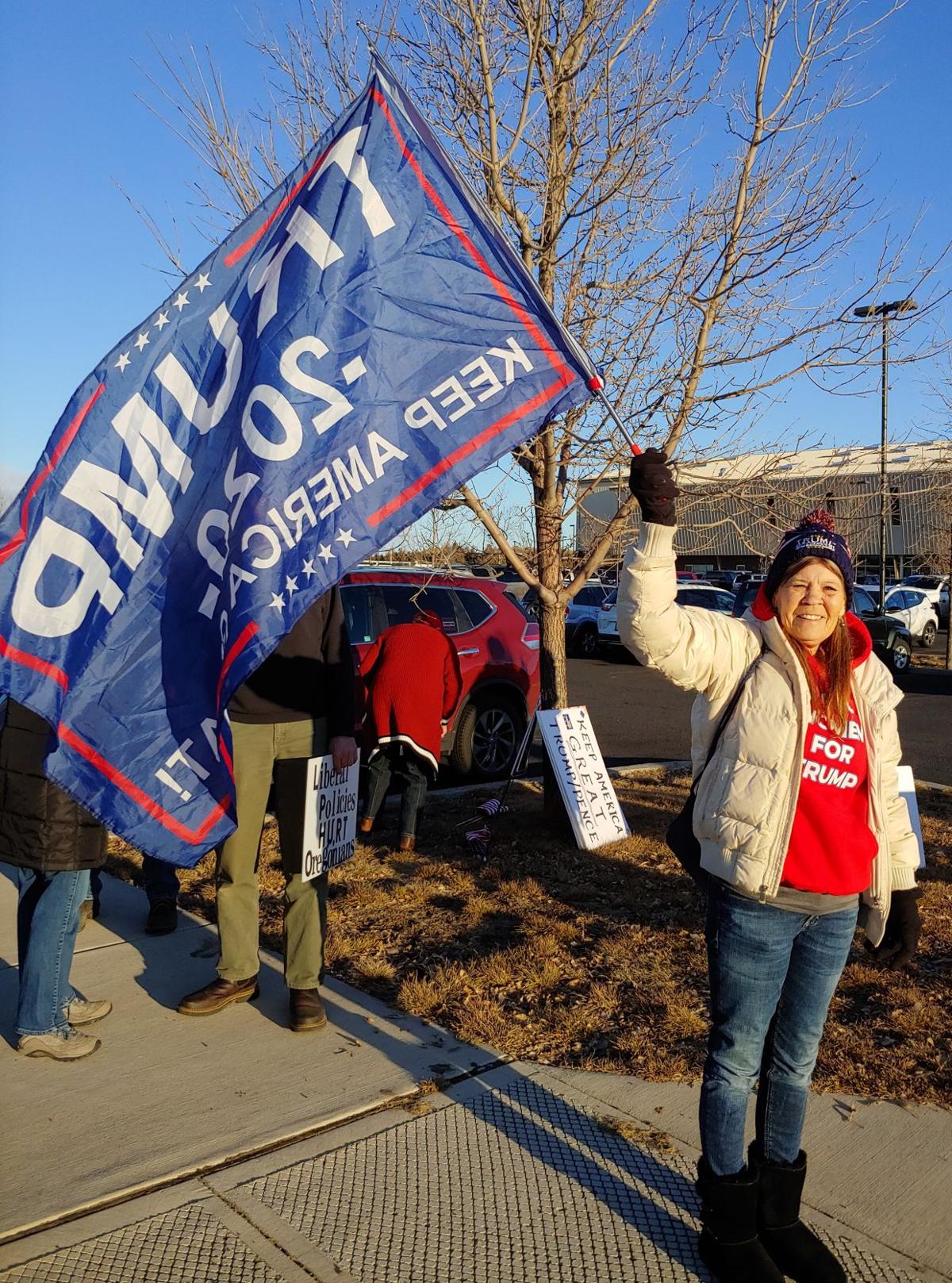 Kim Fritz holds a “Trump 2020” flag before Sen. Jeff Merkley’s Jan. 4 town hall in Redmond. She was part of a group of protesters at the event.

Sen. Jeff Merkley, D-Oregon, speaks during his Jan. 4 town hall meeting at Ridgeview High. Merkley addressed Iran, climate change and impeachment at the event, which was his seventh town hall so far this year.

Kim Fritz holds a “Trump 2020” flag before Sen. Jeff Merkley’s Jan. 4 town hall in Redmond. She was part of a group of protesters at the event.

With the United States facing a conflict with Iran at the same time an impeachment trial is expected in the Senate, it was no surprise that national issues were front and center during Sen. Jeff Merkley’s Jan. 4 town hall at Ridgeview High.

At his seventh town hall of the young year and 403rd since taking office in 2009, Merkley took questions for nearly an hour from an audience of about 150 people in the school auditorium. He had events scheduled later in the day in Madras and Prineville. It was the first Redmond town hall for a U.S. senator since 2017, when both Merkley and fellow Democratic Sen. Ron Wyden appeared in the Hub.

Merkley eased into the Iran issue, where concerns of retaliation have been escalating since the Jan. 2 killing of Iranian Maj. Gen. Qassem Soleimani, after a question about a perceived shift in the power to declare war from Congress to the president since the Sept. 11 terrorist attacks. Merkley said both Democratic and Republican presidents have interpreted the Congressional authorization after the attacks to mean they can use military force in ways that were not originally intended, and he proposed a bill that would rescind that authorization.

With the risk of Iranian retaliation, President Donald Trump particularly needs to get Congressional approval before going to war with Iran, Merkley said.

“It would be the equivalent of Iran assassinating our secretary of defense, and we need to work incredibly hard to emphasize the president does not have the constitutional authority to take us to war,” Merkley said. “And we need to try to interrupt the escalation to another major war that will endanger our national security, result in thousands of Americans who will die on the battlefield and cost us another trillion dollars. We have to speak up with everything we can to stop that.”

One attendee asked about censuring Trump in light of his recent impeachment on abuse of power and obstruction of justice charges by the House of Representatives, but Merkley called censure a “toothless strategy.” Merkley added that he anticipated House Speaker Nancy Pelosi will refer the impeachment to the Senate in the next week.

Merkley said the impeachment is consistent with the founders concerns of foreign influence and that the president could become “king like.” He is concerned that Senate Republicans will not allow a trial where both sides are able to prevent their case and call witnesses.

“To have the majority leader say he’s going to work hand in fist with one side in a potential hearing and try to prevent there from being witnesses and documents, to me that is a violation of our constitutional responsibility,” Merkley said. “I feel that if you can’t take the oath in an honest and fair way to do impartial justice, then you need to recuse yourself from participation.”

In contrast to recent town halls by U.S. Rep. Greg Walden, R-Hood River, and state Sen. Tim Knopp, R-Bend, the audience remained civil with little interruption by people not called on. However, a group of Trump supporters demonstrating outside the event before it started did draw some criticism from passing drivers.

“President Trump hasn’t done anything wrong,” Kim Fritz, a Deschutes County Republican Party precinct committee person and member of Oregon Women for Trump, said before the town hall. “The people who are colluding are the Democrats.”

Fritz said she is working to see Merkley defeated in his run for a third term this year.

In response to a question about climate change, Merkley, 63, said the issue of carbon pollution is the “biggest challenge human civilization has faced, collectively.” He said people are breathing in 33 percent more carbon, with huge heat retention, than they did when he was born.

“We see the impact in Oregon in so many different ways,” he said.

That includes earlier snow pack melt, which impacts irrigation of farms and the health of fish; acidity in the ocean; and, most notably, forest fires, Merkley said, adding the only response is to transition quickly to renewable energy from fossil fuels.

While the United States takes much of the blame for the rise in carbon, Merkley called out U.S. allies for their positions.

“(Canada’s Justin) Trudeau says he’s a climate champion, but he wants to triple the pipeline to the tar sands, and Australia is a burning inferno, with its coral reefs dying, and it’s talking about doubling coal,” Merkley said. “If we’re gonna take action, you’ve got to take action. Germany did a lot on solar, but now it wants to build its future energy economy on a massive natural gas pipeline from Russia.”

Merkley, of Portland, took questions while seated on the edge of the auditorium stage. Redmond Mayor George Endicott drew tickets with a number held by an audience member to determine who got to ask questions.

Three area high school students were given the opportunity to ask questions without having to take part in the drawing.

Merkley responded that he would like to see Pell grants dramatically increased, while giving people income-adjusted loan repayment and refinancing for student debt. He stopped short of calling for free college for all, as some Democratic presidential candidates have done.

“I’d like to see us get to debt-free, I don’t think it necessarily has to be free, but debt-free, the opportunity is there for everyone,” he said.

Sen. Jeff Merkley discusses possible federal funding for a Redmond Smokejumper museum and what he’d like to see from the Democratic field in an interview with the Spokesman: redmondspokesman.com/news/sen-merkley-discusses-local-issues-democratic-field-in-interview-with/article_952f7c0c-2f3d-11ea-892b-bb649db0ec40.html