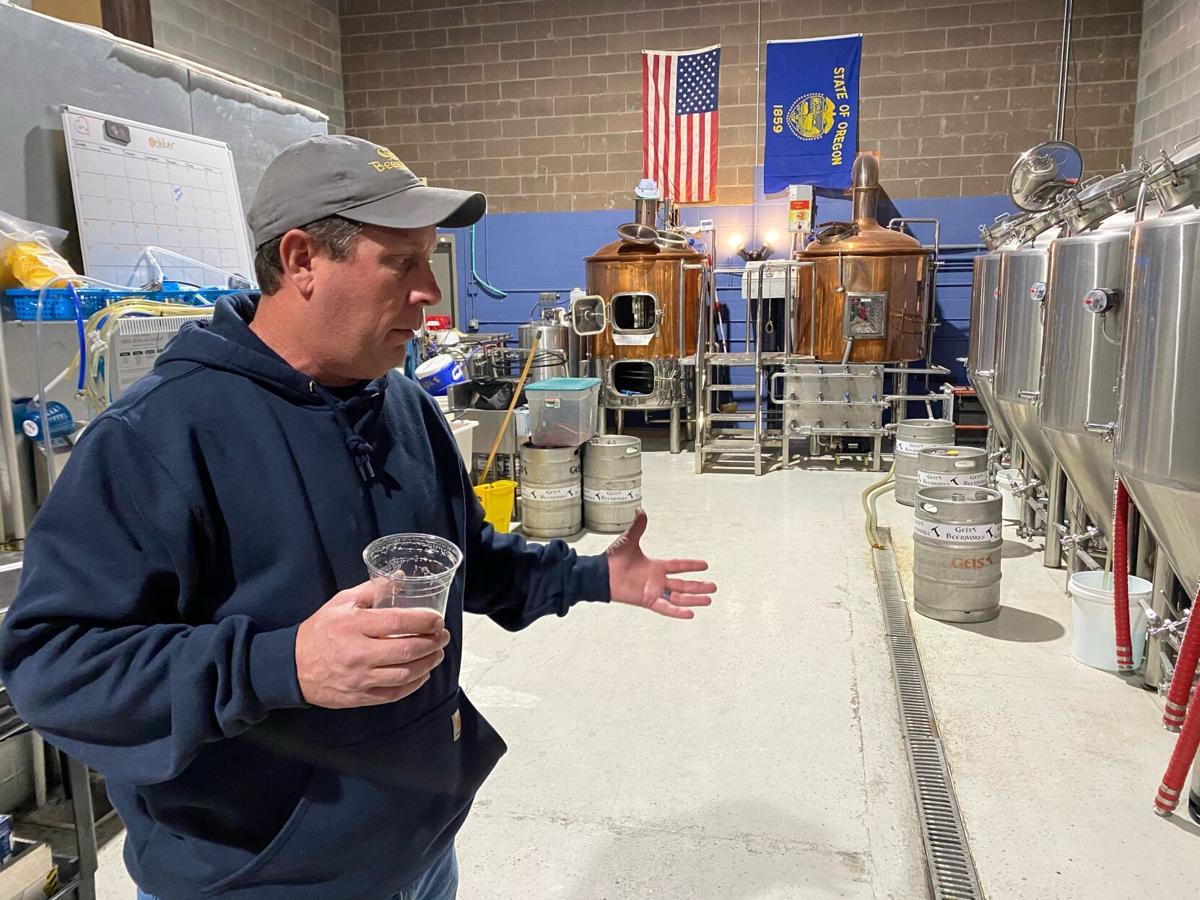 Greg Wales on the last night of his brewery business in Redmond on Dec. 30. 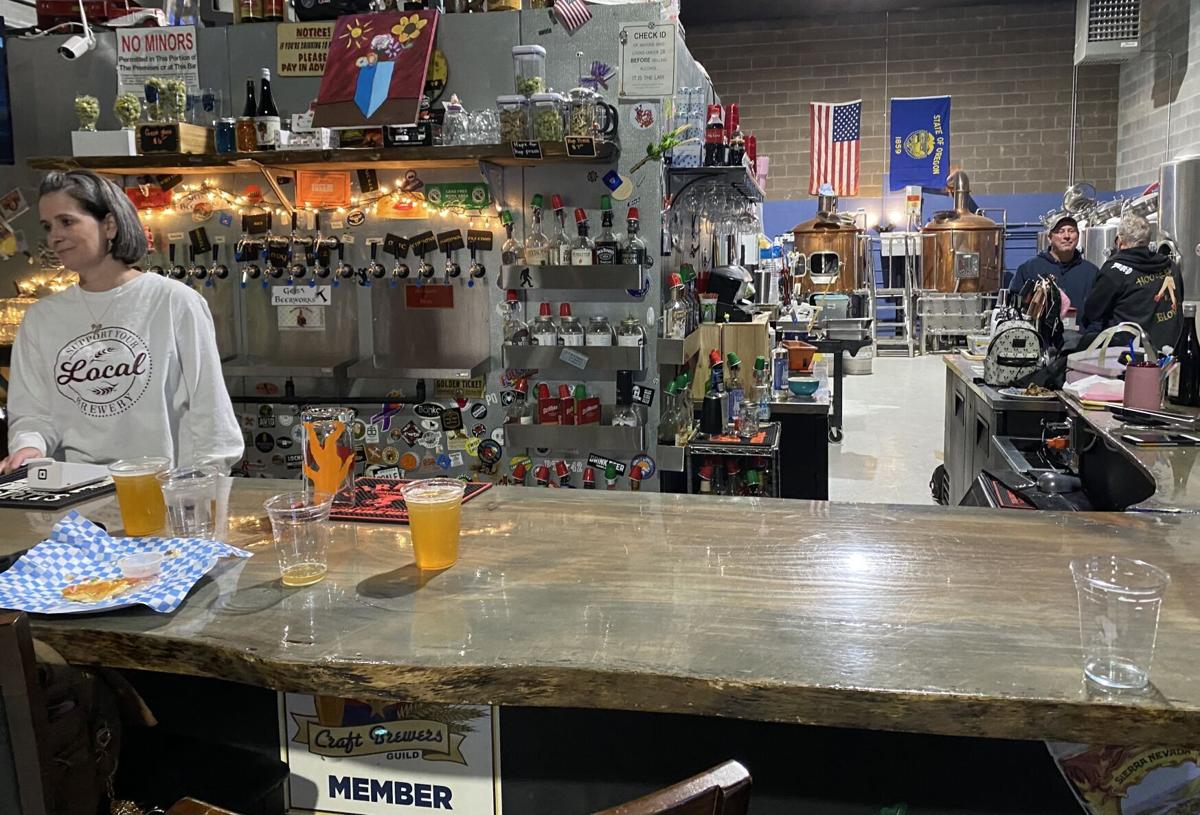 Heather Wales, left, serves drinks on the last night of her brewery’s operation, Wednesday, Dec. 30, 2020. Her husband, Greg Wales, is in the background talking to a customer.

Greg Wales on the last night of his brewery business in Redmond on Dec. 30.

Heather Wales, left, serves drinks on the last night of her brewery’s operation, Wednesday, Dec. 30, 2020. Her husband, Greg Wales, is in the background talking to a customer.

REDMOND — The latest dream to die in the pandemic was that of Heather and Greg Wales, the now-former operators of Geist Beerworks on SW Umatilla Avenue, which filled its last growler on Dec. 30.

For two years, the transplanted Arizonans enjoyed the kind of success founders dream about. In short order they’d developed a core of regular patrons and a rotation of popular mainstays and seasonals.

In 2019, the couple started hosting paint parties, cornhole tournaments, brewers guild meetings and other gatherings, regularly drawing upward of 60 people to their space near Redmond Airport. Things were going so well that by January, they were looking at property downtown, with plans to bottle and can and hire their first employees.

We all know what happened next.

“If you had told me last year that in a year we’d be out of business, I wouldn’t have believed you,” Greg Wales said near last call.

Owners of local restaurants and gyms who limped through 2020 are increasingly choosing to close up shop, but some are reopening and risk hefty state fines.

Heather and Greg Wales decided not to openly ignore Gov. Kate Brown’s pandemic-related business restrictions. In response to COVID-19, Oregon counties are now categorized according to risk with Deschutes County among the many considered “extreme.” In these counties, dining is limited to outdoor-only and gyms and indoor entertainment areas are to remain closed.

Brown recently announced Deschutes County would remain in the “extreme” set for at least another month.

Wales expected to spend part of Friday pouring his remaining inventory, about $24,000 of beer, down the literal drain in the middle of the floor. He called it his “donation to the city water department.”

A group of Oregon mayors has supported defying the governor by passing resolutions “opening up” business in their communities.

Redmond Mayor George Endicott acknowledges he doesn’t have the power to reopen businesses even if he tried.

“What most people don’t realize is that mayors, we have no authority here,” he said. “We have persuasive abilities but in this case, the governor is the authority, and regardless of how I personally feel, I cannot direct people to open up their businesses. That comes with risk.”

Endicott, 71 and in his 12th year as mayor, says he talks to more and more owners of hospitality and fitness-focused businesses who’ve chosen to re-open in defiance of the governor’s orders, though he declined to identify any.

Endicott attended Geist’s closing night, sans facemask. He said the Beerworks isn’t alone. At the beginning of 2020, Beccerra’s on 6th Bistro was bringing fine dining to downtown Redmond. Several months into the pandemic, owners Moises and Sheila Beccerra pulled up stakes and ended their business.

Endicott said the closures hurt, especially in light of how hard officials worked to attract new business to Redmond following the Great Recession.

“There has to be a balance between lives and livelihoods, and I don’t think we’ve found it yet,” he said. “In some respects, losing your livelihood is akin to losing your life.”

Activists promoting reopening are distinct from right-wing figures like Redmond’s BJ Soper, who wants to fully reopen the economy and also are opposed to social distancing measures intended to stop the spread of COVID-19.

Soper refers often to sections of the the U.S. and Oregon constitutions as a justification. Recently, he wrote to Deschutes County Sheriff Shane Nelson and the Deschutes County Commission saying the state was at a “crossroads.”

“The governor is not an all powerful queen issuing commands over subjects,” he wrote to The Bulletin. “She has no authority to tell any individual how to think or act.”

It’s not an opinion shared by Endicott or Brown, who on Thursday issued a forceful statement chastising local politicians attempting to subvert pandemic-related health and safety measures, calling them “irresponsible.”

“Undoubtedly, those same local elected officials who are encouraging businesses to fully reopen and flagrantly disregard public health are unlikely to have the backs of businesses when faced with fines and penalties, nor are they likely to be willing to be held responsible for the public health impacts their actions create,” Brown said.

To business owners considering reopening in defiance of the law, Brown said she’d directed “all available resources” to aid enforcement by Oregon Occupational Safety and Health and the Oregon Liquor Control Commission.

“I expect enforcement agencies to continue to use an education first approach, but Oregonians need to understand that these rules are enforceable under law,” she said.

An Army vet, Greg Wales’ passion for beer making was lit while he was stationed in Germany. He and his wife, a former special education teacher, chose Redmond after researching areas with both good schools and a thriving beer culture.

Wales, 55, said he never considered flouting the governor’s rules, in part because black marks on his liquor license would follow him to any state in the country should he choose to try to make it somewhere else.

“We’re going out peacefully,” he said. “Oregon, we love you. Hopefully someday, we can come back, but right now we need to make a living and provide for our children.”