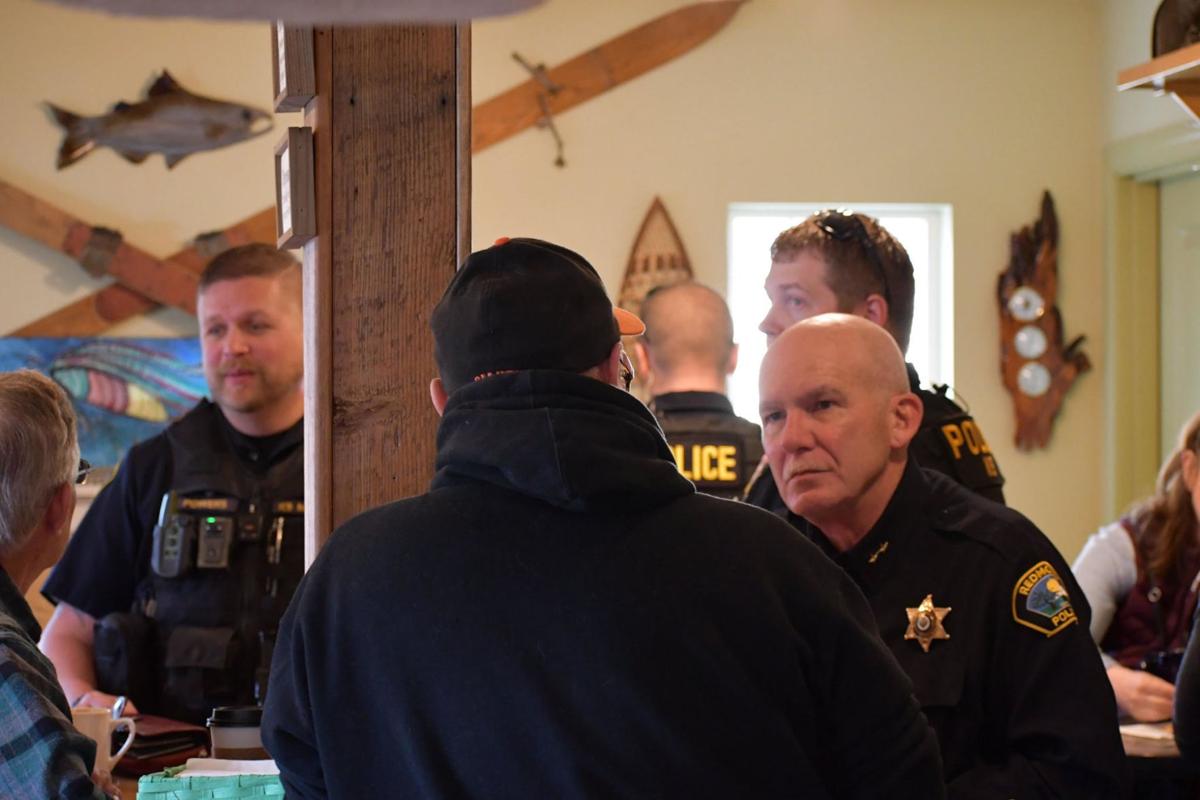 Redmond police speak with citizens during last year’s Coffee with a Cop. That event may have to wait until the COVID-19 pandemic passes. 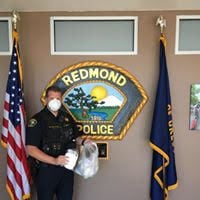 Redmond Police practice social distancing when engaging with the public. 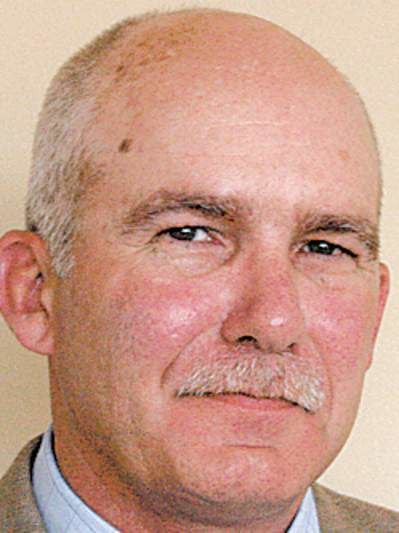 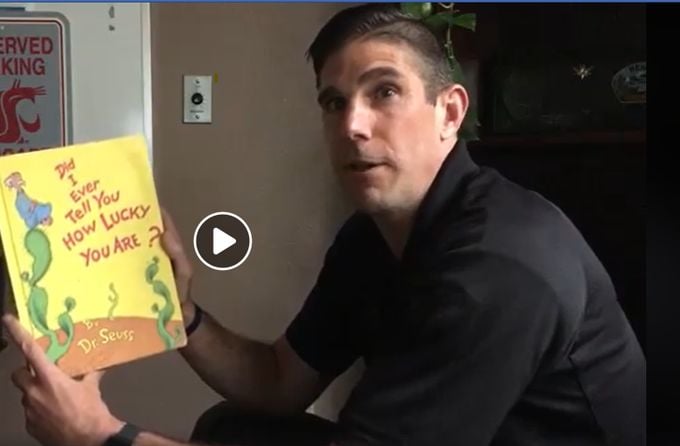 Redmond Police Capt. Devin Lewis reads to children as part of a weekly program to engage the community while the COVID-19 pandemic forces the public to remain indoors. 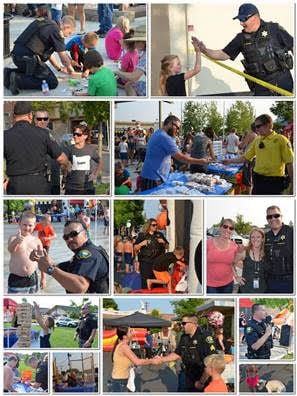 A collage of community engagement at the annual National Night Out usually held in August. It may not take place this year due to the COVID-19 restrictions.

Redmond police speak with citizens during last year’s Coffee with a Cop. That event may have to wait until the COVID-19 pandemic passes.

Redmond Police practice social distancing when engaging with the public.

Redmond Police Capt. Devin Lewis reads to children as part of a weekly program to engage the community while the COVID-19 pandemic forces the public to remain indoors.

A collage of community engagement at the annual National Night Out usually held in August. It may not take place this year due to the COVID-19 restrictions.

The Redmond Police Department has seen a 45% increase in domestic abuse and domestic violence calls from mid-March to mid-April compared to the same time period a year ago, officials report.

Much of it is likely due to the stay-at-home/shelter-in-place orders that have gripped much of the country as a way to curb the spread of COVID-19. But forcing citizens to remain indoors can create friction among families, too.

Keeping citizens and patrolmen safe is a high priority during this pandemic, Police Chief Dave Tarbet told the Spokesman in a wide-ranging interview last week.

“Our goal is to work smartly, efficiently and keep officers and public safe,” Tarbet said. “We’re using online reporting as much as possible, a new program we started in the fall of 2018.” That is where people can file reports online rather than have to come to the police station.

“This helps avoid unneeded personal contact,” Tarbet said. “We’ve educated our officers, dispatch about symptoms of the virus to alert officers to anything like that when they respond to a call. We answer a lot of calls by phone and sometimes we use personal protection equipment if they have to enter a home or just ask people to step outside their homes or businesses. But we maintain a proper social distancing.”

There has also been a significant increase in mental health crisis calls, according to the chief. (A list of resources available to people is attached to this story). About two-thirds of the force has had training in crisis intervention. If an issue escalates, there are mental health counselors available 24/7 as well.

“Domestic violence reports are taking longer to rectify because there is no place for people (a suspect) to go when they are told to remain in the home,” Tarbet said. Instead, if a person has to be removed from a home, they are sent to a hotel, or stay with a family member or friend’s house.

That requires more time and resources for the officer to work out, the chief said.

Countdown to Camp No. 19: Which players could be ready for breakout seasons?

And use-of-force incidents — where a patrolman has to use force to subdue a suspect — were in line with other area agencies’ numbers.

According to Capt. Devin Lewis, there were 1,980 arrests in 2019 and force was used on 36 of them or 1.8%. Those numbers were similar to the Deschutes County Sheriff’s Office and Bend Police department’s numbers. Redmond had a total of 31,000 calls in 2109.

A “force response” is defined as an incident when the officer used a degree of force “beyond physical control.” Using a taser or physically taking a subject to the ground are counted as instances of force.

The department has 45 sworn officers, three part-time SROs for the schools and 11 support staff, plus a part-time staffer. The department’s budget is about $10.2 million annually.

It has vacancies for three patrolmen and one part-time staffer. Those jobs are being held in abeyance until the city sees how its budget will do in the coming year. The city predicts it may have at least a $400,000 shortfall in revenue from the bed tax and gas tax due to people traveling less under the COVID-19 orders.

“Without knowing the full extent of the pandemic and its financial hit, we are being cautious of filling any vacancies at this time,” Tarbet said.

Going forward after the pandemic restrictions are lifted, the police chief said, “We’re focused on how to re-connect with the community. We will study what we’ve learned and if there are systemic changes in the department that need to happen, we will implement them.”

Public engagement such as Coffee with a Cop and the annual National Night Out public safety event are on hold now due to the restrictions from COVID-19.

However, the Redmond Police Department has instituted a reading program for children to keep in touch with the community — remotely — and encourage kids to read.

Redmond RPD Reach can be accessed on the police departments Facebook page. Each week an officer reads a book for children. Parents can view the video at any time.

Central Oregon's free COVID-19 nonemergency hotline is open from 7 a.m. to 7 p.m., Monday to Friday. Call to connect with a caregiver or county health professional. This partnership between St. Charles Health System and Deschutes County Health Services, which debuted on March 17, is currently averaging 275 calls per day and is open to all residents of Crook, Deschutes and Jefferson counties.

A range of services are standing by to assist individuals experiencing isolation or in need of a caring voice.

Crisis lines: Individuals can call these numbers if they, or a loved one, are experiencing a mental health crisis.

Deschutes County Health Services shared suicide prevention resources today. According to the local public health authority, suicide is the most preventable form of death and something we can all do to help prevent suicide is to promote resources in our community.