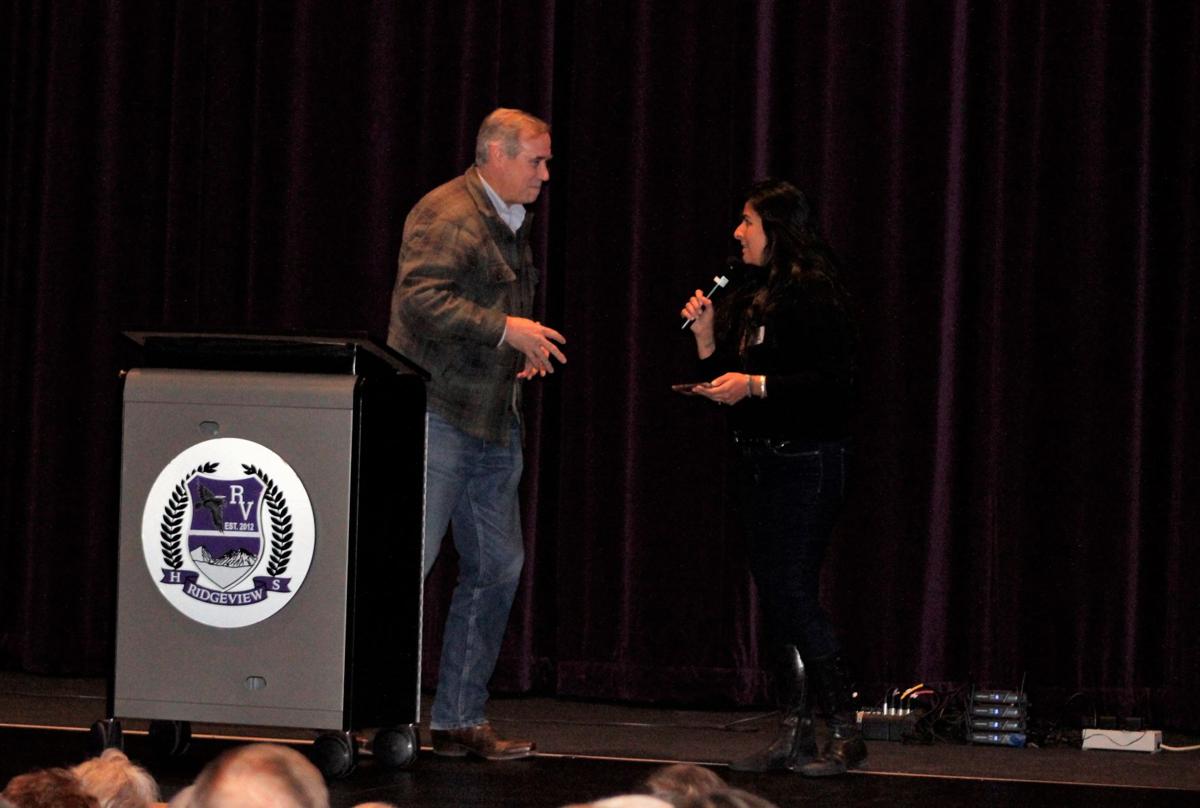 Sen. Jeff Merkley, D-Oregon, presents a flag flown at the U.S. Capitol to Liliana Cabrera, president of the Latino Community Association board, at Merkley's Jan. 4 town hall at Ridgeview High. 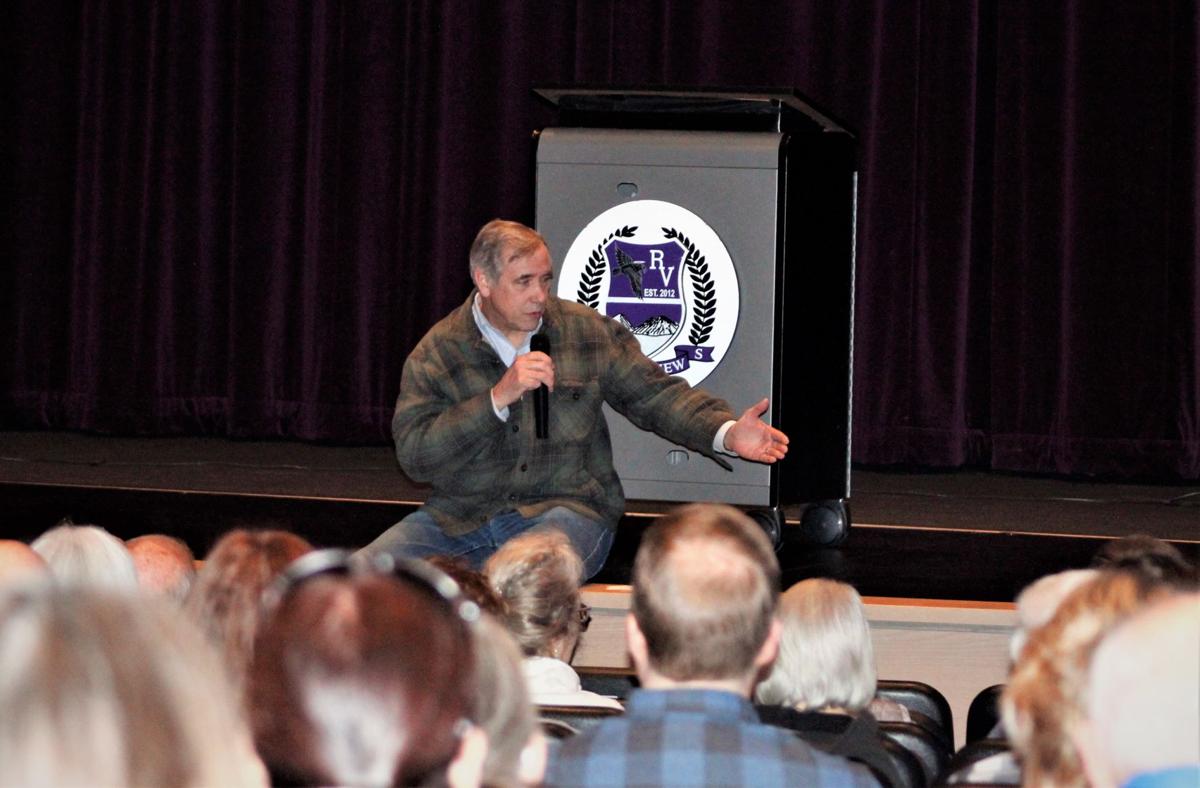 Sen. Jeff Merkley, D-Oregon, presents a flag flown at the U.S. Capitol to Liliana Cabrera, president of the Latino Community Association board, at Merkley's Jan. 4 town hall at Ridgeview High.

Before taking the stage for his first Redmond town hall since 2017, Sen. Jeff Merkley, D-Oregon, took time to talk to the Spokesman about a variety of issues.

While escalating tension with Iran and the impeachment of President Donald Trump get national headlines, Merkley said he has done bipartisan work that will help Central Oregon. Merkley, who considered a run for the 2020 Democratic presidential nomination before deciding to run for a third term in the Senate instead, discussed everything from a proposed smokejumper education center in Redmond to what he would like to see the Democratic presidential candidates discussing.

Our interview is below. It has been edited for space and clarity (mostly to clear up my mumbling).

Spokesman: To my knowledge, this is the first public event a statewide elected official has held in Redmond (despite it being one of the 20 most populated cities in the state), not counting (recently appointed) Secretary of State Bev Clarno, who lives here. Redmond is represented by Republicans in the state legislature and Republican Rep. Greg Walden in the House of Representatives and two Democrats in the Senate. All are in the minority party. What do you say to people who might feel left out of the political process here in Redmond?

Sen. Jeff Merkley: Well, the key is to identify the challenges we face and try to solve them. And that doesn’t need to fall along party lines. One of the reasons I hold town halls in every county is to ask the local officials what they’re working on and figure out how to be as helpful as I can. That’s led to many, many projects that have helped rural Oregon, ranging from helping farmers legally transport their crops with trucks across state lines to saving our rural post offices to watching a major initiative for water infrastructure to right here in this area assisting the irrigation districts with the big task of piping their canals, which helps them and puts a lot more water back in the river and helps everybody. None of these types of things need to be partisan issues.

Spokesman: We see these catastrophic wildfires in Australia, is that something that is a risk here, particularly with climate change?

Merkley: The fires are the biggest manifestation of the risks of climate change in Oregon. We see many other things, for example the red zone, where the pine beetles are killing the pine trees because it’s not as cold in the winter to kill the pine beetles. We see it in the earlier melt in the Cascades snow pack, which affects irrigation water for ranchers and farmers and the health of our trout and salmon streams. We see it in many ways, but the fires are the scariest and most devastating part of this — longer, hotter fire seasons. We were fortunate this last summer, it wasn’t quite as bad, but as we look ahead in the next couple decades, we can expect those decades to be a lot worse than the two decades past. Which is actually one of those issues where there are things we can do — we can thin our second-growth forest, make them less vulnerable to fires, produce jobs and saw logs at the same time. It’s a win-win.

Spokesman: Redmond and the U.S. Forest Service could be looking for $2 million in federal funding toward a smokejumper and wildland fire museum, with a total cost of $5.3 million. Is that something you would support getting federal funding for?

Merkley: Well, we can’t do earmarks, but Sen. (Ron) Wyden and I can write letters of support to existing grant funds, try to identify if there are pools of grant money that would be eligible for that situation. My team is hard at work on whenever that issue comes up. We try to find out where the money is and help Oregon communities apply.

Spokesman: Is there anything else coming up that might be of interest to people in Central Oregon?

Merkley: A couple of things, one is I’m very pleased that we were able to legalize hemp, that’s a big industry that’s important here in Central Oregon. It began with my working with (Majority Leader) Mitch McConnell (R-Kentucky) to allow research farming for hemp and then to allow seeds to be transported across state lines, which set the stage for the 2018 farm bill, in which Sen. Wyden and (Kentucky Republican Sen.) Rand Paul got involved, so you’ve got this Republican-Democrat, Kentucky-Oregon partnership to make this happen. And it may well be the largest cash crop in Oregon this year...Oregon now has a Global Hemp Innovation Center, run by Oregon State University, so we are doing more hemp research than any other state. We are also weighing in strongly on how you evaluate hemp in terms of its THC content, so that regulations are not used as a back-door strategy to shut down the hemp cultivation.

Another piece is the piping of irrigation canals in Central Oregon, which is a win-win for our farmers and for the Deschutes River. It will put a lot more water back into the Deschutes River. It is greatly needed to help with that ecosystem...This year, I expect that about $35 million will come to Oregon (which irrigation districts can apply for). This is a big deal.

The third thing is the work I’ve been doing on the forest fires. We now have over 2 million acres that have been environmentally approved for thinning, for treatment. We need more money for that. We did get more money, but not enough money. Trying to thin these second-growth forests and make them more resilient. The Milli fire that came down on Sisters was stopped by a thinning project. Once you thin the forest, you do a treatment, you go back in and do a prescribed burn. You restore a forest that’s much more resilient to fire and produces saw logs and jobs.

Spokesman: ( I asked a question that, in hindsight, didn’t make much sense that I don’t want to repeat, but it led to the senator talking about a separate topic that I want to include.)

Merkley: I recently got a bill passed to block the sale of crowd control equipment to the police in Hong Kong, and this became a significant symbol of support for freedom for the citizens of Hong Kong. They asked me to tape a video for them. On Thanksgiving Day, they had a rally of 100,000 people, and they put the video of my support for freedom of people of Hong Kong up on the megatron. But that was unusual in that I passed it in the Senate, got it passed the next day in the House, and it was signed by the president, although he was kind of reluctant...It sent a message, when often our executive is not supporting human rights around the world, in this case, Congress was able to force the president’s hand and take a stand for human rights.

Spokesman: Speaking of the president, how comfortable do you feel with him leading the situation in Iran at this point?

With ‘work to do’ to catch 49ers, Packers GM Brian Gutekunst aims to close gap, build on 2019 success

Merkley: Not at all comfortable. When I met with Secretary (of State Mike) Pompeo, when he was up for nomination, he told me negotiation would never work with Iran, all they understood was force. It’s something consistent with his viewpoint. and what the administration has been doing is unraveling the progress we had made in stabilizing our relationship with Iran and shutting down their nuclear program. They destroyed the agreement that we led the world in developing, and, in doing so, they undermined our leadership in the world and they released Iran from the constraints of that agreement. And now they’ve proceeded to do a series of measures that have a high possibility of creating an escalatory cycle that will lead to a war in the Middle East or a war with Iran. We must do everything we can to stop that from happening.

Spokesman: Do you think the president is doing this to distract from the impeachment situation and the 2020 election?

Merkley: Well, we’ll learn more when we get our briefings when we return next week. I would hope that the president would never use war to distract from domestic troubles, but the timing of this certainly raises that concern among many Americans.

Spokesman: Do you have an idea when you’ll make an endorsement for president (in 2020)?

Merkley: I don’t know that I will.

Spokesman: So what do you think of the candidates so far?

Merkley: I think it’s been great to have a very substantial field that has presented perspectives of many directions. And it continues to be a robust debate. I appreciate the focus on the fundamentals for families, health care, housing, education, living wage jobs, infrastructure. I would like to see more focus on the corruption of our constitutional system and how to fix it — gerrymandering, voter suppression, dark money in campaigns. Because those factors are being used to produce a government that works more by and for the powerful than by and for the people.