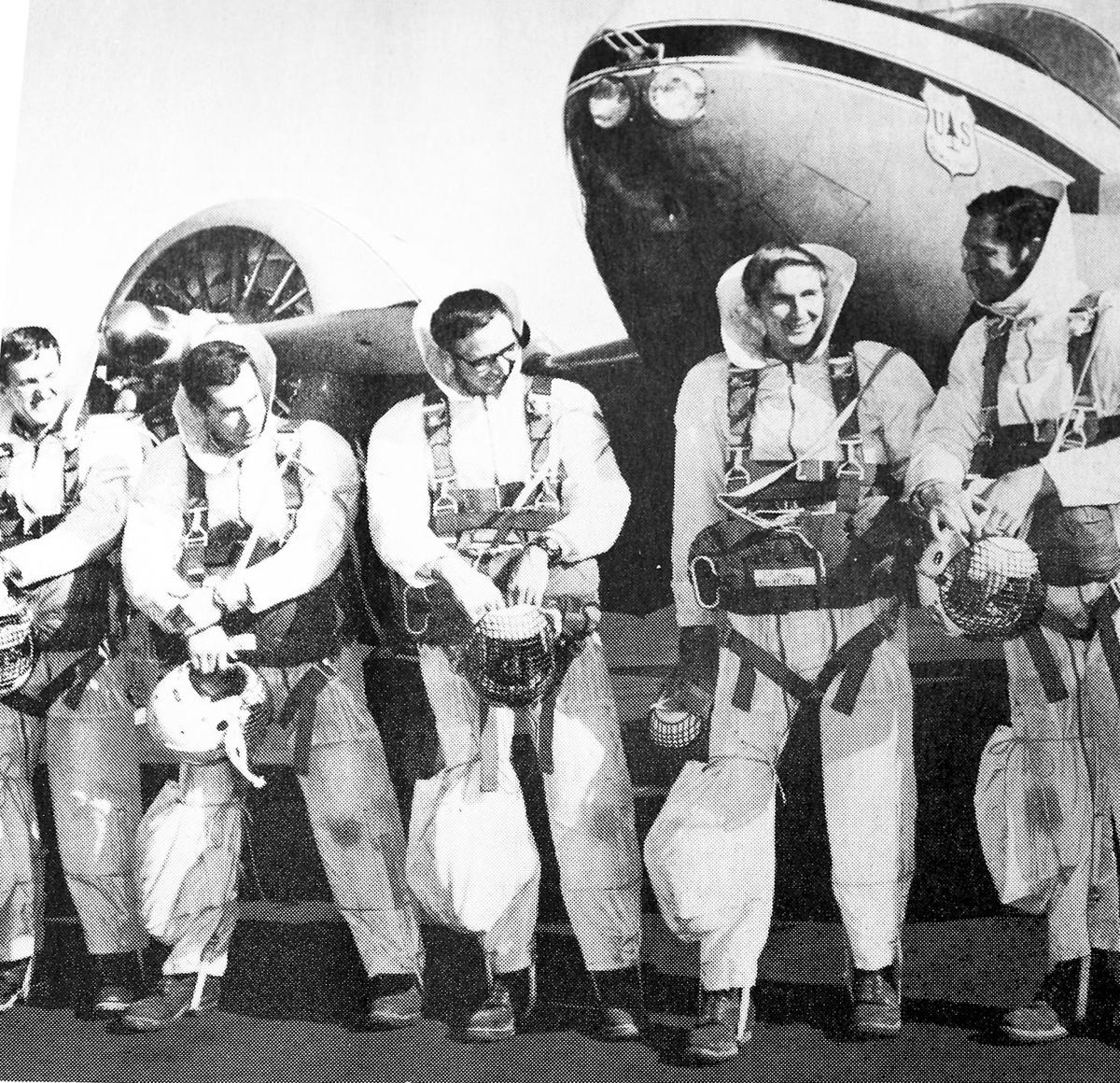 Smokejumpers from the Redmond Air Center prepare to make their 150th jump in February 1972. 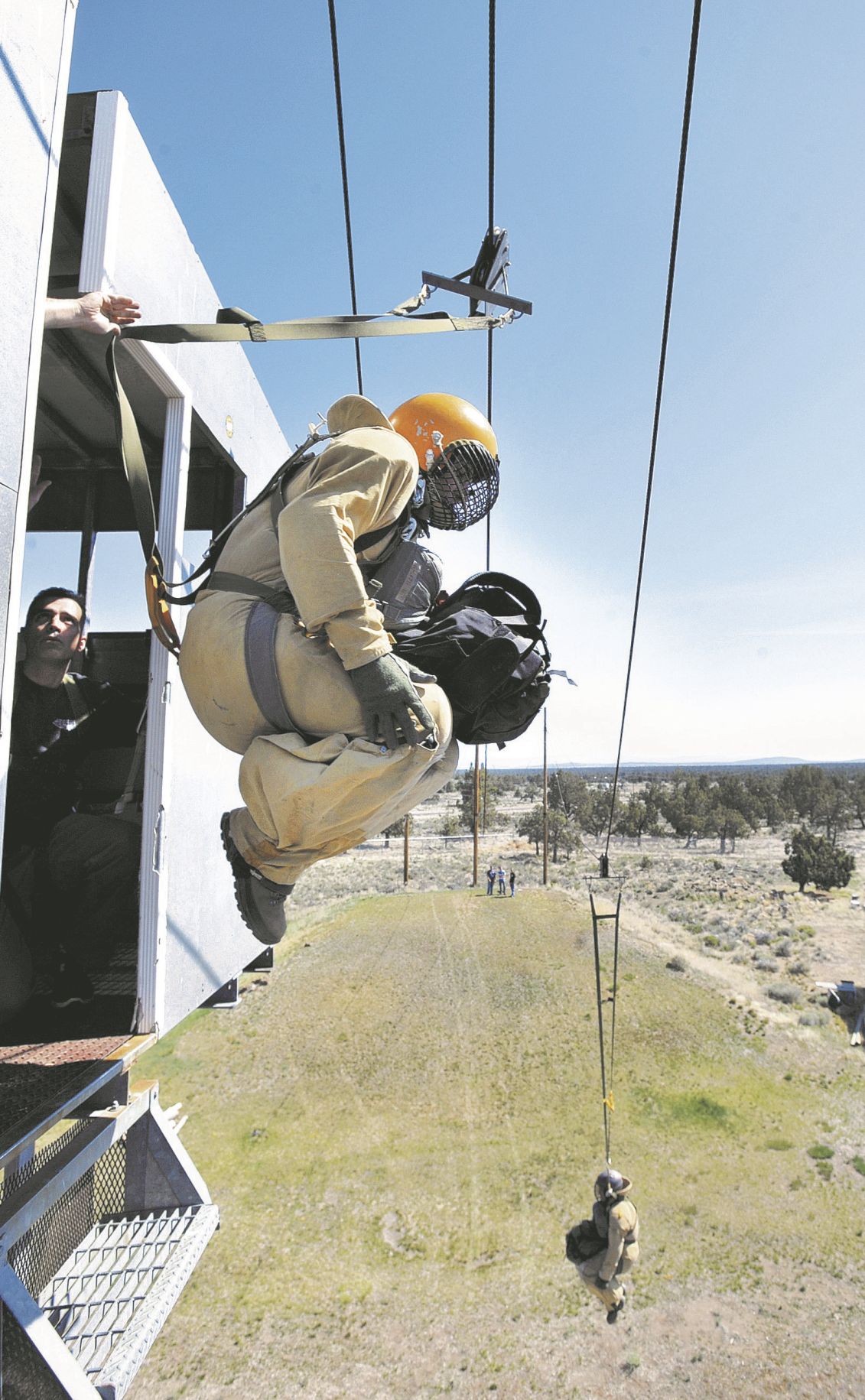 Smokejumper Ben Bell grabs the leg pockets of his jump suit while making a 2012 practice jump from the training tower at the Redmond Air Center. The facility is near where a proposed Smokejumper museum would be located.

Smokejumpers from the Redmond Air Center prepare to make their 150th jump in February 1972.

Smokejumper Ben Bell grabs the leg pockets of his jump suit while making a 2012 practice jump from the training tower at the Redmond Air Center. The facility is near where a proposed Smokejumper museum would be located.

If it wants to keep its best-case budget of $5.3 million, a proposed smokejumper and wildland fire education center could need help from the state and federal governments, officials recently told the Redmond City Council.

The U.S. Forest Service is looking at building the facility at the Redmond Air Center, located along the northern edge of the airport. Joe Stutler, Deschutes County senior adviser, told councilors at their Dec. 17 meeting that the museum would be a “premiere tourism destination for Central Oregon.”

“We still think the bare minimum would be at least 40,000 people a year,” he said of the number of visitors to the 5,500-square-foot museum.

While the museum has been compared to a smokejumper visitor center in Missoula, Montana, Stutler said the Redmond facility would be different from anyplace else in the United States.

“There is not another facility like this in the United States, where you’ve got the (Interagency Support) Cache and the smokejumpers and the aviation unit and the hotshots and the dispatch center and the perfect viewing area,” he said. “The closest thing we have in Missoula is nothing like this in terms of proximity and all that.”

The Missoula smokejumper visitor center attracts about 30,000 visitors a year, officials said. The projected totals for the Redmond smokejumper museum compare to 91,513 for the Lava Lands Visitor Center near Lava Butte and 187,457 for the High Desert Museum.

Along with improving the regional tourism economy, the museum seeks to better the understanding of fire ecology, help visitors, including students, appreciate wildland firefighting and provide volunteer, intern and job opportunities.

It could include history from prehistoric burning by American Indians to the African American 555th Airborne, which patrolled the Northwest looking for Japanese balloons that carried incendiary devices intended to cause forest fires during World War II, officials said. The museum would feature an interactive area for children and, possibly, a replica fire lookout and air tanker base viewing platform.

“This is sort of the top-end, dream facility that we would build,” said Rika Ayotte, executive director of Discover Your Forest, the friends group for the Deschutes and Ochoco national forests.

Wyoming home football game against Utah is off due to pandemic

The museum could be scaled back if needed, Stutler said.

“That’s our dream child — that’s sending our kids to Harvard,” he said. “We may want to look at the first two years at a (junior college) and build it out after that.”

A recent fundraising feasibility study, conducted by Vancouver, Washington- based consultants Westby Associates Inc., showed a wide range of potential support from potential private donors — from $162,000 to more than $1 million. Ayotte told the city council they would like to see a larger process conducted, since only 30 stakeholders were interviewed.

“Joe and I feel this was a pretty limited study,” she said. “Thirty interviews in a capital campaign study is not a lot. They’re typically between 60 and 80.”

Along with about $300,000 from private foundations like the M.J. Murdock Charitable Trust, officials said they could seek around $2 million from the federal government and $1.5 million from the state for the museum.

When asked about legislative prospects for funding by Councilor Jon Bullock, Stutler responded that the chances of getting approval in the short 2020 state legislative session are “pretty slim,” but he felt better about congressional help.

“The chances are, with this year an election year, I think from the federal side are pretty darn good,” he said.

They are even looking for private investors that could combine the museum with a microbrewery or restaurant, Stutler said.

Museum organizers don’t think they will need to ask for city or county money for the project, at least for now.

“We come into this saying we think we can put this together, we want your support,” Stutler said. “I don’t anticipate coming to you and saying, ‘We’re $200,000 short, here’s my hat. Fill it up.’ I don’t see that right now.”