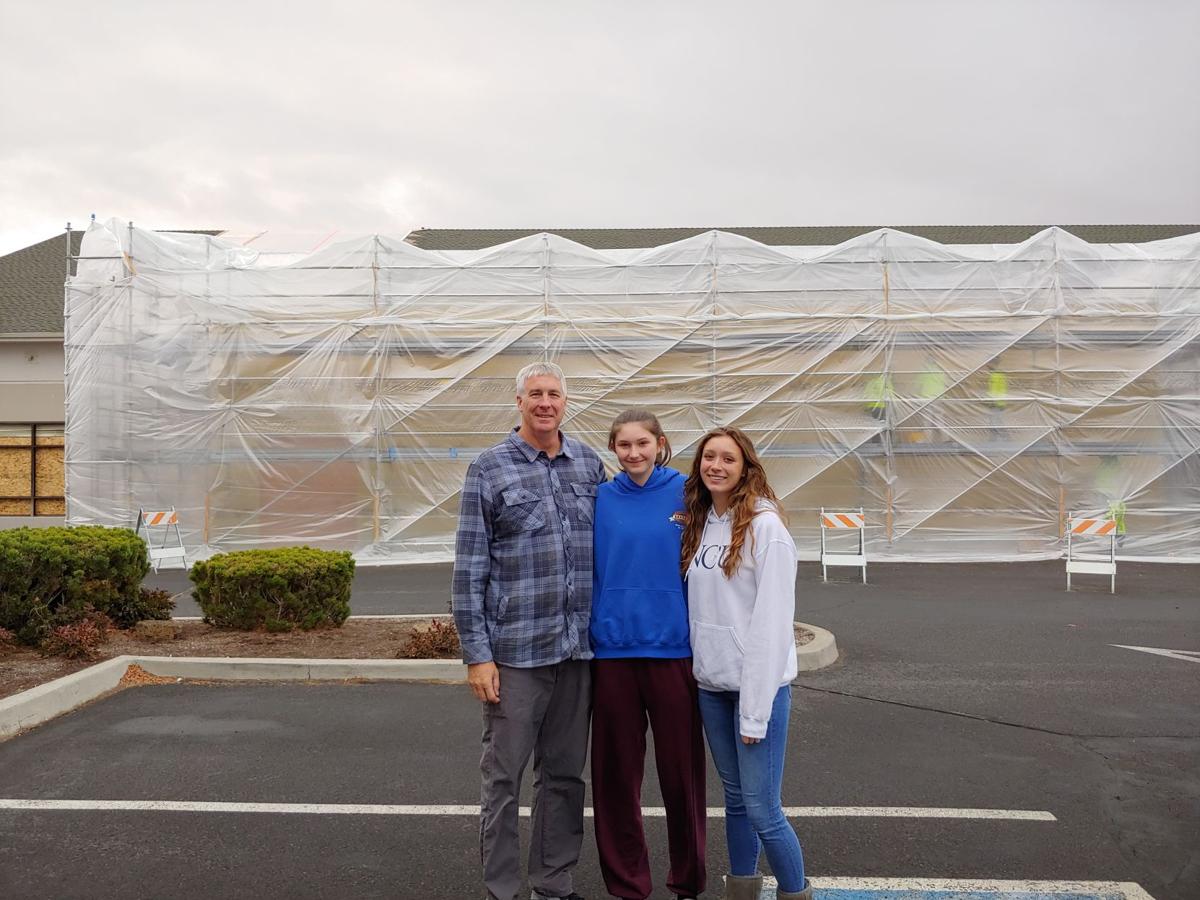 From left, Central Christian volleyball coach Mike Polk and players Rilea Mills and Myka Delamarter stand in front of the building being renovated into a gymnasium for the school. With all but one player expected back and the new on-campus facility, the team has hopes of reaching the state finals next season. 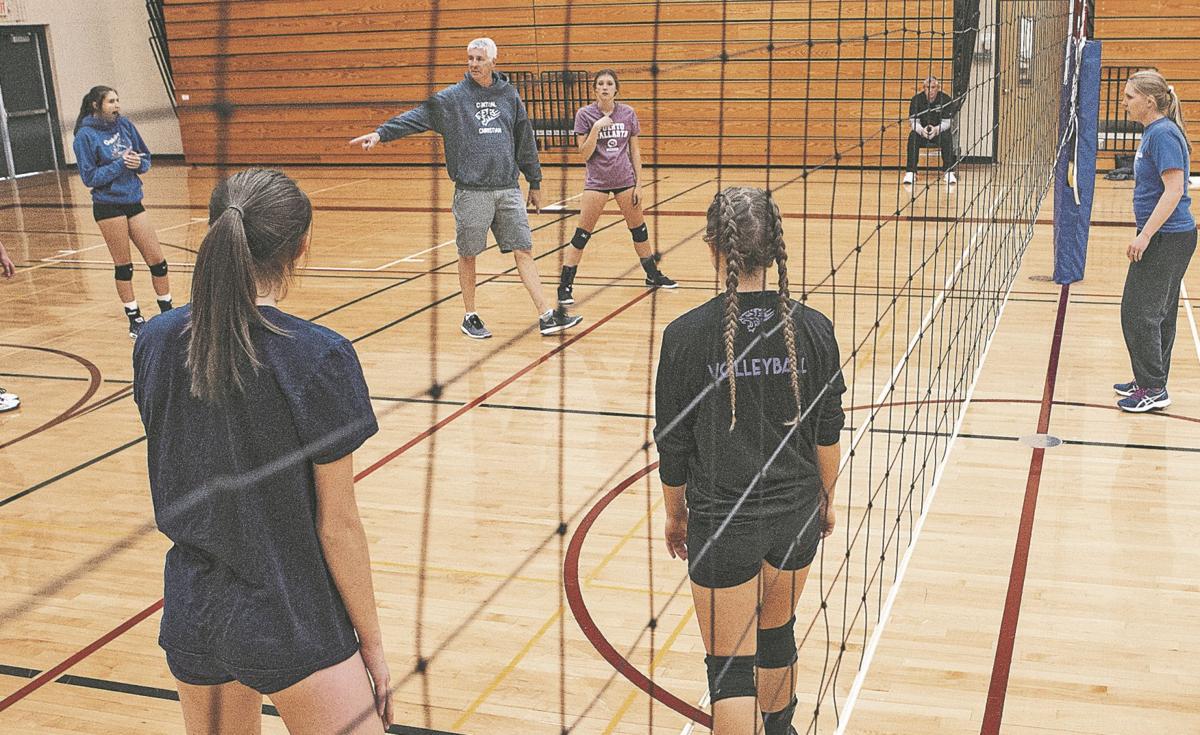 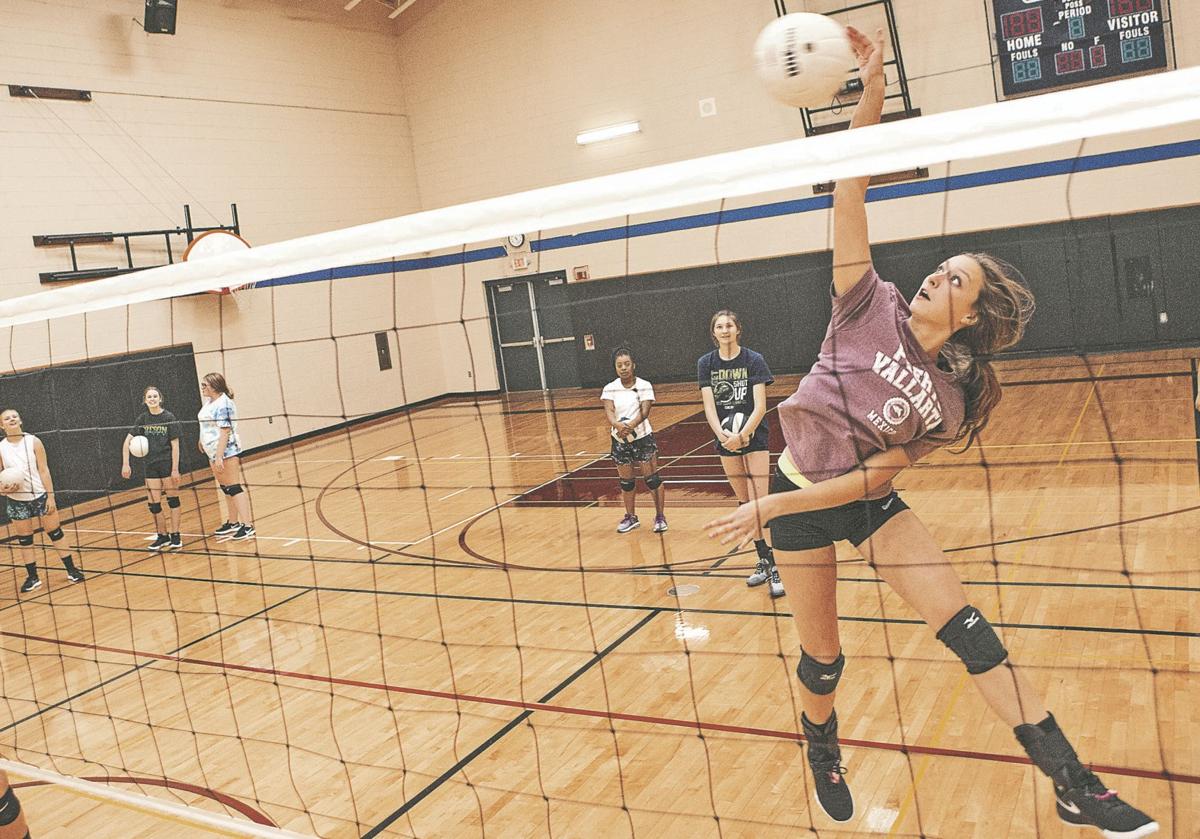 Central Christian’s Myka Delamarter hits the ball over the net while practicing with her teammates Oct. 9 in Redmond.

From left, Central Christian volleyball coach Mike Polk and players Rilea Mills and Myka Delamarter stand in front of the building being renovated into a gymnasium for the school. With all but one player expected back and the new on-campus facility, the team has hopes of reaching the state finals next season.

Central Christian’s Myka Delamarter hits the ball over the net while practicing with her teammates Oct. 9 in Redmond.

A successful volleyball season for Central Christian School is just the beginning for the program, the team’s coach hopes.

The Tigers recently wrapped up their first season under coach Mike Polk with a 17-6 record, including their first playoff victory. Polk took two years off from coaching after serving as head girls basketball and assistant volleyball coach at rival Trinity Lutheran in Bend for 11 years, but decided to return to lead the Tigers.

“I missed everything, I missed all the kids and missed coaching,” he said.

Polk jumped at the opportunity to come back, and knew early on that he could have a special group.

“The first time I saw them play this summer, I knew they had potential,” Polk said. “I did my homework and found out what they were about. It was fun. We always talked about team and what that does for us.”

The Tigers started to see improvement in 2018, when they won 10 matches in the Class 1A Mountain Valley League, as many as they’d won the previous four seasons combined. But players say something was missing.

“For sure, being a team,” said junior outside hitter Myka Delamarter. “In years past, it felt like it wasn’t as much of a focus. (Polk) really emphasizes being a team, which has helped us the most in our games.”

Central Christian went through the Mountain Valley season with an 11-2 league record, and defeated Elkton 3-0 in their first playoff match Oct. 30. With a chance to reach the state tournament, played across town at Ridgeview High, the Tigers fell in five sets against eventual state semifinalist Country Christian in five sets, with the deciding game decided by a 15-13 score.

“It was disappointing to lose, but we came so far and played so hard and took them to five sets,” said Delamarter, who had 17 kills in the loss. “I’m pretty proud of that.”

But next season, the Tigers lose only one senior. They will also be practicing and playing matches in their own gymnasium on the Central Christian campus near Redmond Municipal Airport. They have been playing across town at the Redmond Early Learning Center.

Construction on converting a former 14,000-square-foot office building into a gym is expected to be completed by May, Polk said.

With a big tiger as center court, and not as many lines from various sports covering the floor as at the Early Learning Center, the players expect the new gym to be intimidating to opponents.

“I feel like having a new gym will be great,” said sophomore middle blocker Rilea Mills. “It’s really hard having to go to another facility and having to share with other people.”

The team looks to add even more firepower for 2020.

“Next year, we’ll be really good,” Delamarter said. “We have some girls coming up from J.V. All of us are talking about offseason work.”